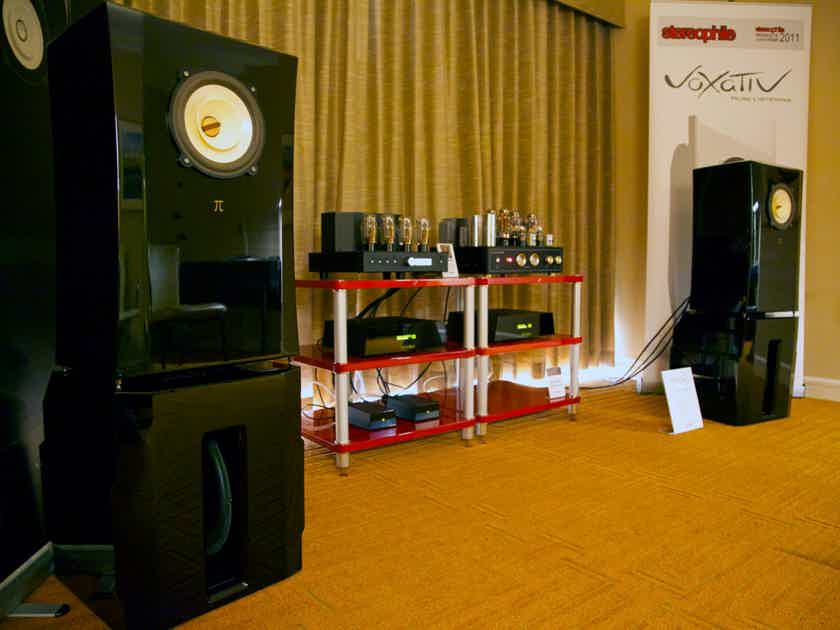 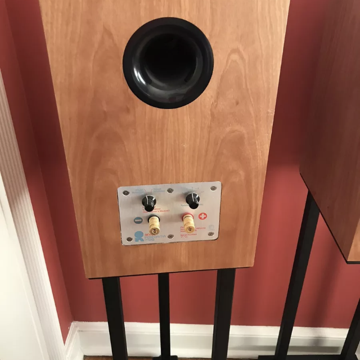 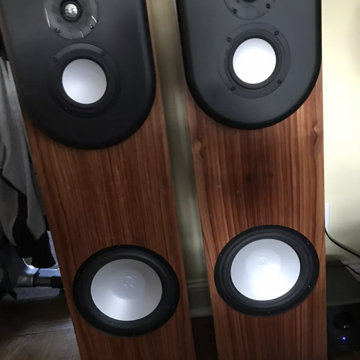 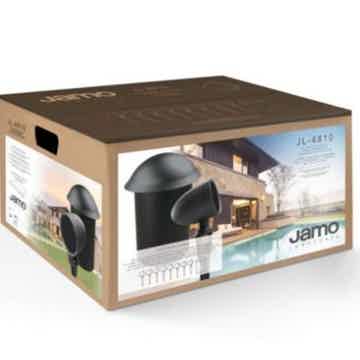 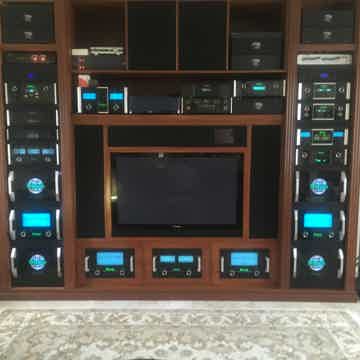 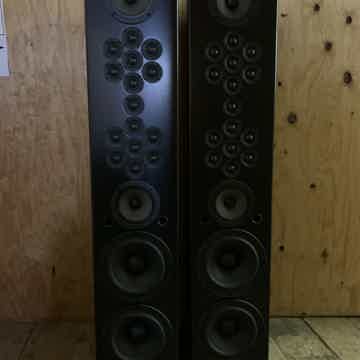 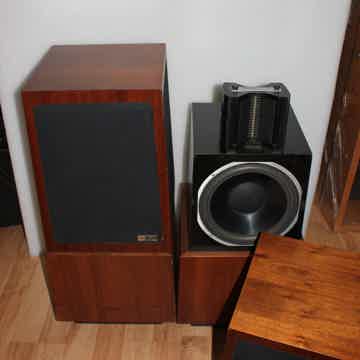 TAS sums up: "...this is the most complete and realistic-sounding horn-loaded, single-driver transducer Jonathan Valin has heard yet - a truly innovative design worthy of TAS 2018 Technology Breakthrough of the Year award..."

The Voxativ 9.87 was reviewed in the December 2018 issue of The Absolute Sound. Jonathan Valin, concluded:
"...the Voxativ 9.87 is far and away the best folded-horn single-driver loudspeaker I’ve ever heard. For those of you who listen primarily to acoustic music, who like their dynamics untrammeled, and who want their detail, both musical and recording, as high as that of an electrostat without any electrostatic-like loss of color or body, it comes with my top recommendation. If you’re also a fan of SET’s or relatively low-powered tube or solid-state amplifiers, the Voxativ 9.87 becomes a veritable one and only top recommendation. Which, come to think of it, is precisely what it is for the right kind of listener - a reference product..."

Check out a VOXATIV FACTORY TOUR video and get a peek behind the scenes.

The 9.87 system is Voxativ’s latest loudspeaker which fulfills all desires on an audiophile listening session. It combines the advantages of the award-winning fullrange speakers with a very fast dipole woofer system. The 9.87 loudspeakers come in three different versions - with AC-PiNd drivers, AC-4D or with Fieldcoil drivers. Finish comes in black or white piano lacquer.

oduct of the Year Award.

Released May 2015, first appearance at the HighEnd Show in Munich and already winner of the Gold Show Award for the Best Sound. In October 2015 winner of 6moon’s Blue Moon Award 2015. Followed by Jonathan Valin’s Best Of Show at T.H.E. Show Newport Beach 2016 and Best of Show Runner-up 2017 in Munich. Another Gold Show Award for the Best Sound at the Rock Mountain Audio Fest 2017 in Denver followed by a Gold Show Award in Munich 2018. And the very latest achievement is The Absolute Sound’s Golden Ear Award 2018 and Best Of Show again at the RMAF 2018 followed by a TAS Product of the Year Award 2018.

Best Of Show award at the Rocky Mountain Audio Fest October 2018 by The Absolute Sound. Jonathan Valin writes: "...on Chet Baker Sings the [9.87] field coils made Chet’s voice and trumpet - recorded with warm, rich RCA BX-44 ribbons [mics] - sound just like they should have, ravishingly lovely and lifelike..."
CLICK HERE to check it out.

The 9.87 also received the prestigious Golden Ear Award 2018 by The Absolute Sound. Jonathan Valin writes (August 2018):
"...the 9.87 is the most complete and realistic-sounding single-driver cone loudspeaker I’ve auditioned, giving you the incomparable coherence of a single crossoverless transducer (with the seamless addition of low bass thanks to the Pi-Sub) along with the efficiency, resolution, and dynamic range of a horn..."

Jonathan Valin of The Absolute Sound wrote (May 2017 Munich):

"...to my surprise, the Pi (9.87 system) had extremely deep, powerful, open, free-flowing, seamlessly matched bass! ... was quite remarkably of a piece with no loss of upper end extension or transient speed—and none of the usual “hot spots” that single-driver speakers are perennially afflicted with... This is a very special transducer—a BOS contender just for its stat-like coherence and neutrality. Indeed, I thought it reproduced Johnny Hartman’s voice more naturally than anything else at the show."

Terry Eringi, AVShowrooms, RMAF October 2016:
"...what a treat to walk into the Voxativ room and be greeted by Holger Adler. As usual with Voxativ, the room set-up was spot-on. Playing were the 9.87 loudspeakers with improved bass units that were low, extensive with perfect pitch. Holger played a track from the album “la fabuleuse histoire de Mister Swing” with Michel Jonasz on a Fern & Roby turntable with F&R’s new tonearm. We experienced that wonderful clear and perfectly integrated sound I’ve come to know over the years..."

Jack Roberts, Dagogo.com, T.H.E. Show Newport June 2016:
"...the sound was as good or better than anything at the show at any price. I love single-driver speakers and even with the bass extender, the sound was that of one of the best single-driver speakers I have ever heard. Again, let me say this was easily one of the very best sounds of the show. In price, it’s not quite a mega-system, but in sound it surely was!"

Jonathan Valin, The Absolute Sound, T.H.E. Show Newport June 2016:
"...my third best sound of Newport Beach was Holger Adler’s $34.9k Voxativ 9.87 one-way (using Voxativ’s AC-4x spruce-wood-cone driver with neodymium magnet and whizzer tweeter in a folded-horn enclosure, which sits atop an active 12" dipole bass “extender”). Driven by Voxativ’s 845 SET monoblock amps and Ampeggio preamp, and sourced by Totaldac digital, this German masterpiece couldn’t be more different than Cessaro’s horns or Gauder’s steeply crossed-over multiways (both also from Germany, as it turns out), but its sound was, in its own way, just as fascinating and just as realistic. Neutral and absolutely seamless, the 9.87 (along with Voxativ’s Ampeggio Due) is simply the fullest-range, most natural-sounding one-way (or augmented one-way) I’ve ever heard. And once you’ve heard a speaker without a crossover that is this good, it makes everything else sound just the slightest bit cobbled together from parts. No, you’re not going to get the dynamic range of a horn speaker from the 9.87, nor quite the same resolution or treble extension that you get from the Gauder, but what you are going to get is true point-source imaging and a sound that doesn’t change a jot in timbre from octave to octave..."

Jason Victor Serinus, Stereophile, RMAF Oct. 2015:
"...this truly superior system excelled in communicating the life and beating heart behind the notes. Listening to Agnes Obel via Tidal, I heard beautiful sonorities distinguished by open highs, a superb midrange, and deep bass. Nor did the voice of Cassandra Wilson on "Strange Fruit" possess anything other than a special and wondrous beauty. Switching to analog, a fabulous recording of the Tsuyoshi Yamamoto Trio’s Live at the Misty excelled in its percussive impact. I wouldn’t call this system totally neutral—it had a special shine to it, as would a jewel that had been buffed and polished to perfection—but it was supremely musical and drop-dead seductive..."

Michael Lavorgna, AudioStream, RMAF Oct. 2015:
"...this system exuded music into the room and I was lucky enough to join David Chesky and Steve Guttenberg as they went through some of David’s stunning recordings, er, files..."

Clement Perry, The StereoTimes, RMAF Oct. 2015:
"...High-end Electronics had another excellent sounding high-end rig this year. Sweet and delicate with full and quick-footed bass had me captivated for nearly an hour. Ultimately, I spent more time than I wanted in this suite compliments of some pretty impressive components that included the Voxativ 9.87 speaker system..."

Blue Moon Award 2015 by 6moons.com - Srajan Ebaen concluded:
"...a fringe benefit is that the bass cabs with their flexible settings may be acquired for competing products; and that a soloing bachelor Pi can be converted to a properly married Pi at any time by simply inserting a folded felt damper into its horn throat and docking it atop the bass base. Punters with ears bigger than their wallets can thus approach the 9.87 system in two steps to defer the full crunch of the final bill. Add truly impeccable lacquer skins applied by an actual piano maker to cross off luxury optics in the same sentence as luxury costs. On my list of speaker hotties I’d most like to keep around, Voxativ’s 9.87 system enters a tight secret group which includes the KEF Blade 2 and the Vivid Audio Giya 4. Yes that’s illustrious company. And yes, that’s where this one belongs; different but equally accomplished and one to settle down with to call it game over...." Gold Show Award for Best Sound at the RMAF 2016: Now available in the US! Distributed by highend-electronics.

The very first proud owner of the new amazing Voxativ 9.87 System is the renowned mastering and recording engineer Steve Hoffman.

CLICK HERE to watch a video of the Voxativ room in Munich 2015.

Check out the review by Srajan Ebaen on 6moons.com -> CLICK HERE