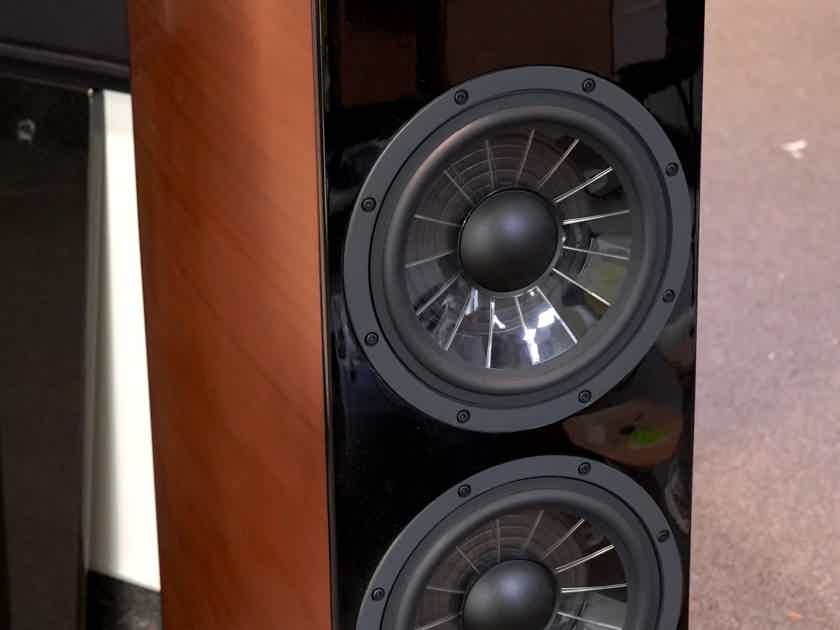 In beautiful gently pre-owned condition, these amazing speakers have won accolades the world over. Includes original shipping crates, accessories and manual with a One Year Factory Warranty. Vie...27999.00

In beautiful gently pre-owned condition, these amazing speakers have won accolades the world over.

Includes original shipping crates, accessories and manual with a One Year Factory Warranty.

Vienna Acoustics´ "THE MUSIC" introduces a truly revolutionary new
flat, concentric 18 cm driver that closely approximates the Platonic
ideal for which speaker designers have been striving. It places 7
octaves of music in a single, phase coherent time plane. With a wave
launch that mimics a "pebble dropped in a still pond", this remarkable
driver reproduces spatial coherence unfamiliar to anyone, save perhaps
the original recording engineer.

The physics of this patented driver are an outgrowth of Vienna´s
longstanding use of reinforced cones designed to maximize strength at
nodal multiples, while keeping mass to a functional minimum. Flat cones
actually do not provide stiffness, but we turned a disadvantage into an
advantage by our patented one-sided-cone-light-weight-framing. Not only
this delivers the best weight-stiffness ratio of any construction (the
construction coming close in stiffness is sandwich, but it is too heavy
as it needs a second layer and a dense honeycomb mesh), it also allows
specific and calculated sound and impulse-response tuning by varying the
quantity of ribs, their shape, their thickness, radial or concentric
orientation, and specified placements on critical spots.

Basis for the cone material is TPX, in a proprietary mix with other
materials for the optimum result of stiffness/inner-damping ratio in
combination with light-weight-framing on the cone's rear side. The
maximum final stiffness is defined by adding glass fibres to the
compound, aligned in the optimum arrangement by according injection
moulding tool execution.  All cones are developed and produced by Vienna
Acoustics in Austria, afterwards manufactured to a complete driver by
Eton Germany.

By using finite element analysis, Vienna Acoustics´chief designer
Peter Gansterer was able to create a radial-vaned structure (like
architecture scientists we place a rib where necessary), cast into the
flat cone that produces an enormously stiff, flat surface (thereby
eliminating time and frequency specific phase shift across the driver),
with a new state of the art silk dome tweeter, using a vented neodymium
magnet structure placed in its center. Years of development made the
flat cone possible, for Peter Gansterer the prerequisite of a
realization of the optimum reproduction unit, a coax. Having 2 drivers
at the same center (point source), results in otherwise inaccessible
homogenous sound, but current technology of cone shaped midrange
diaphragms disqualifies itself by unacceptable colorations of the
tweeter by the cone induced hornloading. In our technology it enjoys a
flat surrounding as usual in highend applications. Similarily, the
midrange itself is uncomparable in its lack of coloration: Cone-shaped
drivers reproduce upper midrange mainly by the inner part, which again
suffers from the hornloadings distortion. At the same time our flat cone
is ultra-stiff because of the ribs and the glassfibers, but exhibiting
smooth musical sound due to the soft inner damping of the TPX material.
The resulting piston like behaviour extends the frequency span,
resulting in a range from 100 Hz to 20.000 Hz from the coax alone,
defining it as the heart of the speaker, thereby being also the heart of
music reproduction. We are that enthusiastic about this music center
that we gave it its own cabinet.

While the top-unit handles mid and upper bass in its own enclosure,
below this primary driver we built a separate large enclosure,
featuring 3 proprietary bass drivers, each with our on proprietary 25 cm
ultra rigid NAWI cones die cast by Spidercone-framing (finally
assembled also by Eton Germany), handling the frequencies from 18 Hz to
100 Hz. The 3 units are working in parallel, while the upper bass
operates in its own chamber. Finally, a remarkable Supertweeter,
manufactured by the Danish high-end specialist ScanSpeak, tops the lower
enclosure, extending response from 20.000 Hz upwards to 100.000 Hz.
During development we revealed that piezo technology, which is used in
the super-tweeter, has superior advantages above 20.000 Hz (optimum
dispersion, acting like balloon inflating). The total decoupling from
the bass chambers allows the coax music center, in its dedicated
housing, to reach the absolute optimum in clarity and naturalness in
sound.

The cabinetry is clearly evolved to make the most of this
technology; the separatetop-unit enclosure is decoupled from the bass
enclosure by a high-tec, drawn aluminium swiveljoint, which allows
optimum room tuning by enable not only adjustment for rake, but also for
toe-in. This allows you to create a sweet zone rather than a narrow
sweet spot. By adjusting the dedicated coax point source cabinet and
directing it like swivelling a flashlight you are able to easily create
the sweet zone wherever wanted. Furthermore this allows for optimizing
the sound to any room condition as many rooms will strongly benefit from
the reduction of the disturbing early reflections which cannot properly
be separated from the direct signal by the human ear. As always, the
speakers´veneer and finish quality is to the highest of standards. "THE
MUSIC" is available in a Sapele veneer finish.

Recommended power: amplifiers from 50 to 500 watts

This is on display and ready to be auditioned in our showroom. If you are in the Chicagoland area, please come by and take a look and listen. We have been in business for over 36 years. We buy, sell, and trade new and used home audio equipment. If you have something you think we might be interested in, shoot us a message.

Local pickup is always welcome. We ship using UPS ground. If an item is too big we ship it freight. Local pickup customers and Illinois residents are subject to Chicago sales tax (10.25%). All shipments are fully insured and international deliveries must have their full value declared.
Payment must be made within 48hrs of auction end, or negative feedback will be left and item will be re-listed. 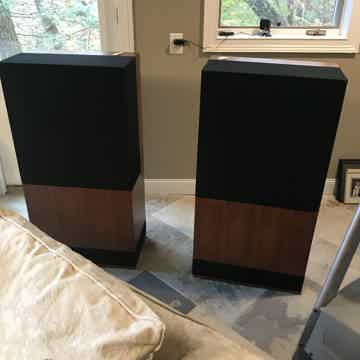 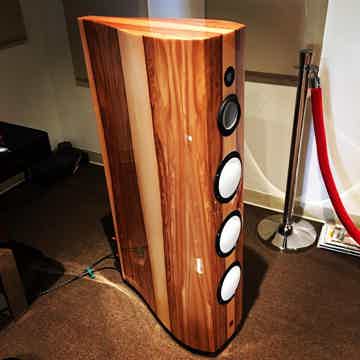 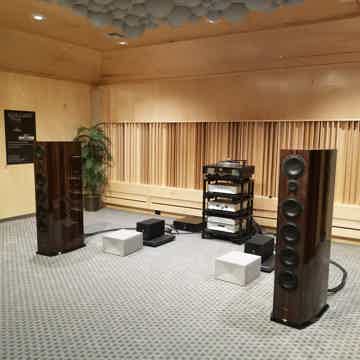 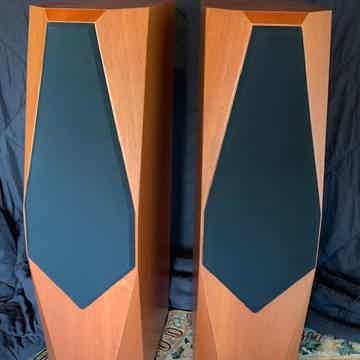 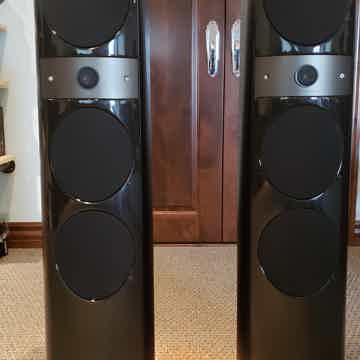