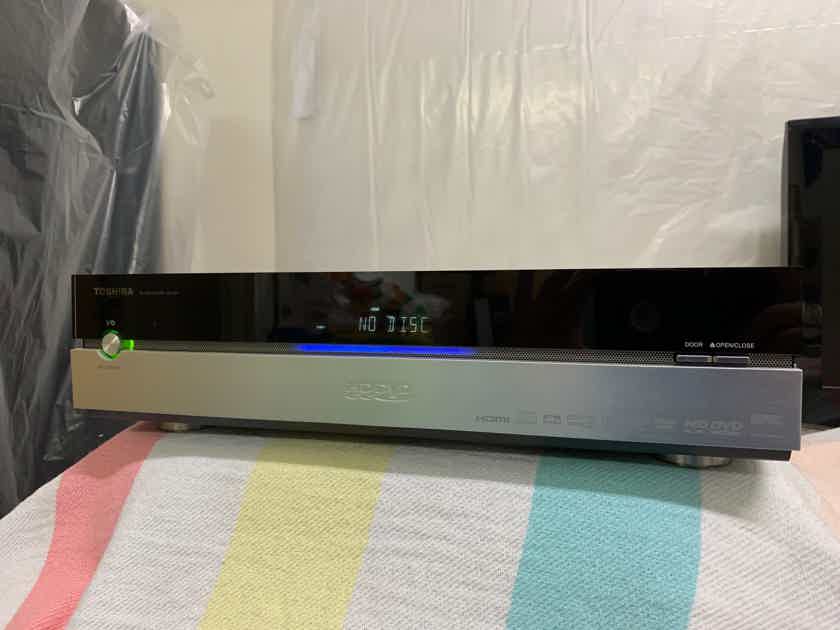 I have for sale a very rare to find Toshiba HD-XA1 High Definition DVD Player in excellent condition. For those of you that recognize this player you know that this was the first Toshiba player tha...150.00 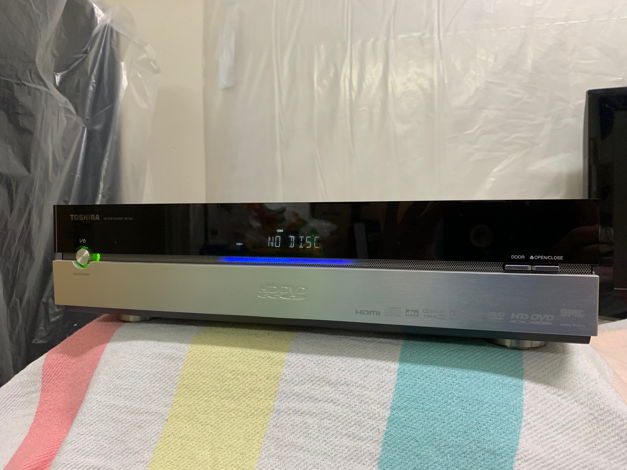 I have for sale a very rare to find Toshiba HD-XA1 High Definition DVD Player in excellent condition. For those of you that recognize this player you know that this was the first Toshiba player that was built to compete with the Blue Ray players . It was the war between which format will succeed and as we know Blue Ray ended up being the choice. Nevertheless this Toshiba player is a great player for someone that just wants to listen to music or just to watch a nice movie with it. One of the things that I like about this player is the motorized door that opens first before the disk tray opens to load a disc. And even though is a bit slow to doing it , it is something nice to see because players like this one are no longer built. This Toshiba HD-XA1 can be a nice add on piece for someone that likes to collect items like this.


The player is in excellent condition and it comes with the original remote, power cord  and manual. I am the original owner and it has been used in a smoke / pet free home. I don't have the original box and although I will not like to ship this beautiful player the buyer will have to pay for shipping and insurance if need it.  Please ad the 3% Paypal for their fees.
Thank you for your interest.

A new prerecorded video format is big news. It doesn’t come along every day. It’s been nine years since DVD was release, and it was 19 before that since LaserDisc. Enter HD DVD. Its higher transfer rate (35.5 mbps versus broadcast’s 19.4 mbps maximum) and advanced codecs (VC-1 and H.264) create a potential for audio and video quality to far exceeds broadcast HD, as well as containing a host of new features and capabilities. The first two models are the HD-A1 ($499) and HD-XA1 ($799). Both have the same performance; the step-up HD-XA model adds a better enclosure, a motorized door, RS-232, and a backlit remote.

he choice of output resolution on component and HDMI is 480p, 720p, and 1080i (via the remote control). While there is no 1080p output, if content is 24-frames-per-second based (such as all currently available movies) and a 1080p display properly deinterlaces 1080i and recognizes a 3:2 film cadence, there shouldn’t be a visual difference when using the 1080i output. Audio outputs include optical and coax, 5.1 analog surround, and stereo. Additional rear interfaces include RJ45, RS-232, and there are two USB jacks on the front.

Transport-button layout is odd. Toshiba decided to place the stop button to the right of the play button, a position that is normally reserved for advancing chapters or fast-forward. In addition, when viewing an HD DVD, pressing stop causes the player to reset (an operation issue), requiring a minute to restart the disc playing. After about a dozen or so unintentional resets, I “retrained” my fingers to resist hitting the stop button when wanting to fast forward a disc.

The remote also requires a gentle touch. Pressing some of the buttons, especially the down arrow, too hard (using my customary touch), will cause the remote to emit (according to a Toshiba spokesman) double-signal commands, resulting in the HD-AX1 to ignore the desired command. If one decides to keep hitting a remote button, the machine would occasionally lock up, requiring disconnecting and reconnecting the power cable to unlock it. The solution: Tap the buttons lightly, and wait for the player to respond, or program another remote control to handle the functions. The remote is backlit, with motion-sensitive lamp activation. That’s a good thing, as the functions are barely legible without the lamp lit.

The audio section has its own quirks. While all the HD DVD discs I have sampled are recorded in 5.1 Dolby Digital Plus, you must connect the HD-XA1 to a surround sound receiver via HDMI or its analog outputs in order to maintain the signal in Dolby Digital. If connected via S/PDIF digital connector (optical or coaxial) the player first internally converts the Dolby Digital Plus signal to PCM then transcodes the signal to DTS for digital output. Considering Dolby Digital Plus (DD+) and DTS are lossy systems, on paper, the sound quality would be at its best if maintained as DD+. However, I listened extensively to the S/PDIF connection, and it sounded fine to me.

Moving on to operation: You can access the interactive menu on the fly, without stopping the disc operation. Some HD DVD discs contain deleted scenes, commentary, trailers, documentaries, alternate endings, and music videos, while others have fewer special features.

All discs viewed were mastered in 1080p. Rumor Has It is a dual-sided HD DVD, with HD on one side and standard DVD on the other. So, what’s the viewing difference? There are two big “wow” factors in the HD DVD image—pristine definition and freedom of artifacts. Let’s begin with image detail. In Rumor Has It, at 3 minutes 53 seconds, where Jennifer Aniston is sitting on a plane, you can clearly see the freckles around her nose and a small mole on her forehead. You can also make out the strands of hair on her head. Using the standard DVD side, the hair is clumped, and her freckles and mole are not visible.

The difference is not subtle, though the bigger the screen size and higher the definition of the display you use will make the clarity improvements more apparent. For my evaluations, I used the Sony VPL-VW100 (1080p) front projector and a 92-inch screen with the output set at 1080i via HDMI. One note: I tried the 720p setting, and the picture degraded significantly. While no test disc is available yet, it is my guess, based on observations, that the processor within the HD-AX1 may be bobbing single 540-line fields and upconverting to 720p, significantly cutting resolution. My advice: Always set the player to the 1080i output, and let your display convert the signal to its native resolution.

The biggest improvement (to me) is the freedom from MPEG artifacts such as edge peakyness (white lines around objects) and mosquito noise (a wispy video noise). The removal of MPEG artifacts should be apparent on any screen size (as long as you are sitting close enough). Every disc I sampled was “clean;” the only “noise” one would see is the actual film grain, just like in a movie theater. The amount of grain would vary greatly with each film. Serenity looked spectacular, with a very fine grain structure along with vivid colors. The cleanliness of the presentation is something I have never seen before in a home setting. If you think over-the-air HD is real high definition, you ain’t seen nothing yet.

Overall, the HD-AX1 represents a big leap in image reproduction. While there are operational issues that will undoubtedly improve with future generations, if you want to experience the next level in high definition content, the HD-XA1 is the ticket. 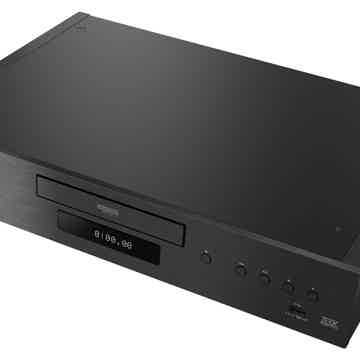