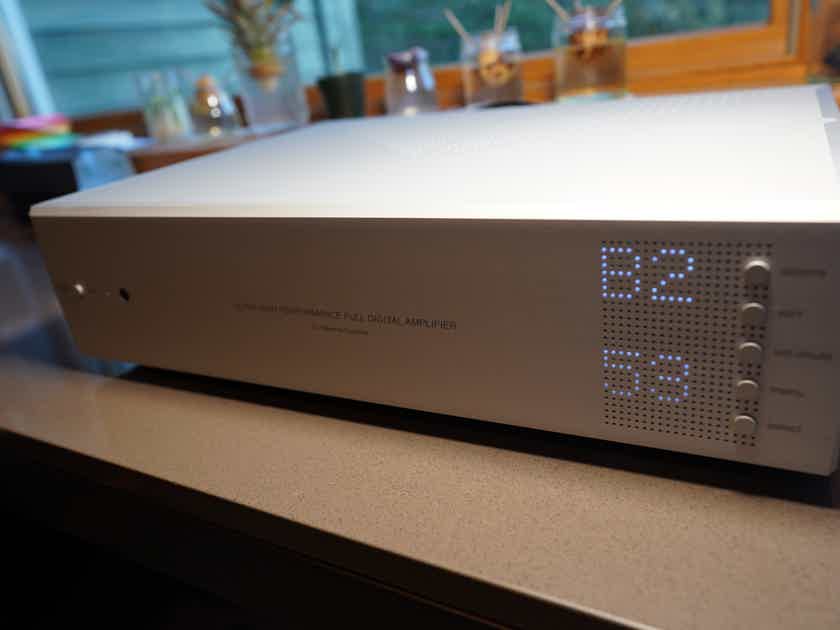 WORLD WIDE SHIPPING AVAILABLE Closing second room so parting with this spectacular integrated amp. NOTE: this is the Amp mkii. Note: all internal electronics and firmware are absolutely...3500.00 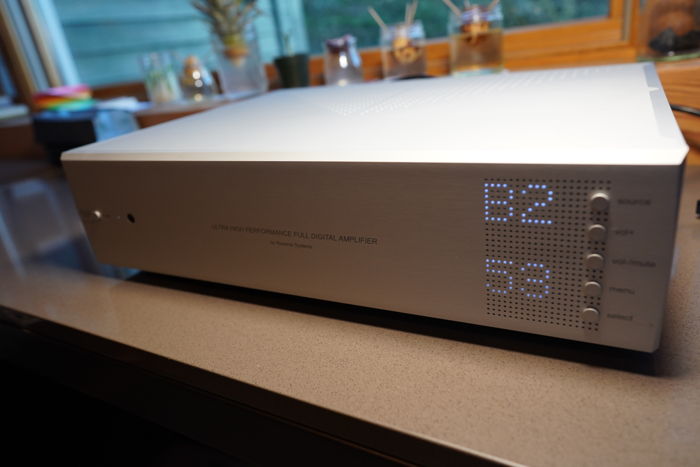 WORLD WIDE SHIPPING AVAILABLE
Closing second room so parting with this spectacular integrated amp.
NOTE: this is the Amp mkii.    Note: all internal electronics and firmware are absolutely CURRENT spec MKII.
It does WAP / X - which is the digitized tube harmonics.
Feel free to reach out with questions -- 120V/240V.
On the What's Best Forum, you can glean very useful information:
https://whatsbestforum.com/threads/waversas-approach-to-digital-amplification-class-d-circuitry-with-class-a-harmonic-signature.30997/


The gateway to a new digital sound world

Many music fans distrust fully digital music playback
systems - and in many cases certainly not without reason. The reason, however,
does not lie in the possible inferiority of digital formats and technologies
compared to analog formats, but in the fact that the digitalization of music in
its beginnings (CD) was not designed for optimal sound, but for cost savings
and data efficiency as well as easier usability (MP3 Etc.). The Waversa Wamp
2.5 along with the entire Waversa product line will revolutionize digital audio
history worldwide because the Wamp 2.5 solves a number of previously apparently
unsolvable problems that cannot be solved even with analog playback.

Waversa understood that digital music largely ignores
harmonics due to the limitation of its resolution compared to real music. The
Waversa Audio Processor (WAP) provides a remedy: it is an FPGA-based audio
processor that interpolates the digital signal in order to approximate it to an
analog signal, then a tube harmonic algorithm reconstructs the 2nd, 4th and 8th
harmonics of real music that were lost during digital recording or digitization
of master recordings. This is how digital music sounds poignantly real,
spatially diversified and natural -- characteristics Class A amplifiers are
known for.

As a result, the Waversa Wamp 2.5 simply opens a new
digital world. The detailed resolution of the sound image is as fine and
detailed as if you were looking into the atomic spaces of music with an
electron microscope. And this high resolution is by no means an artificial
"act" on the part of the amplifier: it just sounds incredibly
natural. The height of the sound stage extends through the ceiling and is
extremely pure and clean down to the deepest depths. The Wamp 2.5 reproduces
music precisely and finely, regardless of the volume, without loss of
resolution. The music plays full and rich on a huge sound stage - even at
midnight at a very low volume.

* PBTL = Para Bridge-Tied
Load. PBTL comprises several small output amplifiers that are combined to form
one amplifier. Configured in this way, it has an extremely low impedance and
can even drive loudspeakers with low efficiency.

Excerpts of Waversa systems W
AMP2.5 review by: gimgwanmyeong with translation and corrections for clarity.

6 types of speakers were used
during this review including Waves Monitor 30.1, Dynaudio Contour S 1.4 LE,
Joseph Audio Pulsar, Odeon Orfeo, PMC fact.3, Stenheim Alumine 2way, and
Waver's W DAC3 To be taken over. I also
listened to the ATC 100 SL tower, which is said to be the touch of the hi-fi
club hall.

In order to distinguish the
concept between class D amplifier and a digital amplifier, it is necessary to
understand PCM and PWM.

PCM is a method of converting
analog signals into digital signals and assigning digital values representing
each analog signal. In short, PCM is an analog signal expressed as a digital
value at the position of each pulse. For example, CDs contain 16-bit, 44.1kHz
PCM digital data. That is, in the case of an analog signal that has been
processed for 1 second, the PCM recognizes the analog signal as a pulse having
different heights (vertical axis) of 4,5536 (16 bits) at 44,100 points
(horizontal axis).

As one of the amplifier
amplification methods, D does not refer to 'D' of digital, but only the order
following class A, class B, class AB, and class C. Usually, after converting
the analog signal to PWM (this device is a Triangle Wave Generator), instead of
analog amplifying elements such as transistors or vacuum tubes, it is amplified
through a switching controller and an output stage. Therefore, the class D
amplification method that amplifies by varying the switching time according to
the width of the PWM signal is also called switching amplification in the United States.
In any case, the switching amplified digital signal is converted back to an
analog signal through a low pass filter and passed to the speaker.

Digital amplifier = The
concept of using a PWM signal rather than an analog signal when a Class D
amplifier amplifies, but a digital amplifier refers to an amplifier that
consists of both digital parts as well as amplification. In the case of W
AMP2.5, all the input analog signals are converted into PCM, which is a digital
signal through an AD converter, and a high-performance chip called WAP (Waversa
Audio Processor) converts PCM back to PWM in the process of performing digital
calculations and algorithms.  This processing improves sound quality,
secures linear frequency band characteristics, and increases resolution through
mathematical calculations made on a chip instead of analog devices such as
resistors and coupling capacitors.

So, how is Waversa AMP 2.5
different from existing amplifiers?

1. The analog signal is
converted to a digital signal PCM (24 bit, 176.4 kHz) by AD conversion. It is
the starting point of all digital processing and the most significant
difference from the existing Class D amplifier that converts the analog signal
directly into PWM. to be.  The Waversa Audio Processor converts the analog
signal to PCM, up-sampling from 16 bits to 24 bits and 44.1 kHz to 176.4 kHz
appears to be a stepping stone to maximize resolution before further processing
(@705.6 kHz or 768 kHz if 48 kHz source or multiple thereof). The frequency
response characteristic of W AMP2.5 is 0 to 160 kHz wideband, which seems to be
due to the initial upsampling.

2. Uniformly align the time
axis of the PCM through the WAP chip: The Triangular Wave Generator used to
make PWM has an inherent limitation since the PWM does not have a clock on its
own.  The WAP chip uniformly aligns the time interval of the PCM with a
high-precision clock in advance then converts to PWM. The PWM signal is then
passed through the Class D amplification process to the final analog output
stage.

3. Improve linearity and
resolution through WAP chip: According to Waversa, it secures linear response
characteristics and increases resolution extremely through mathematical
calculation.  These algorithms perform in real-time on WAP chips. The
mid-range boost problem, which is the biggest drawback of analog amplifiers,
has been solved through the WAP chip. The harmonic characteristics created by
the WAP chip presents a Class A sound.

4. Various digital
corrections are also made on the WAP chip to improve detail and imaging
regardless of volume, which is a unique advantage of digital amplifiers. There
are three major digital corrections that Waversa has proposed:

A. WS (Waversa Ultra Sound)
mode: It is said that the resolution, sound stage, and air sensation can be
made differently using the unique signal processing algorithm of the WAP chip,
but the user can select three modes.

B. AC (Ambient Control) mode:
After detecting ground noise and vibration inside and outside the amplifier
through a sensor, the concept is that the WAP chip generates and cancels the
same value of noise in real-time through digital calculation. There are five
levels of mode, from 'NO', which accepts noise as it is, to 'MAX', which
completely eliminates noise.

C: A tube harmonic algorithm reconstructs the 2nd, 4th and 8th
harmonics of real music that were lost during digital recording or digitization
of master recordings. This is how digital music sounds poignantly real,
spatially diversified and natural.

5. Reduced output
amplification and subsequently amplification error by one-fourth through four
parallel balanced transformerless (PBTL): Class D 600W output at 4 ohms by
adopting a parallel structure of normal, reversed, normal, and reversed-phase,
which is twice the normal BTL. The dual-mono design with the left and right
channels completely separated is allowed using this BTL structure. If you look
at the inside picture, you can see that the toroidal transformer and the SMPS
power source are also covered with duralumin blocks, respectively, and are
installed in pairs of 2 for each channel.

* PBTL = Para Bridge-Tied
Load. PBTL comprises several small output amplifiers that are combined to form
one amplifier. Configured in this way, it has an extremely low impedance and
can even drive loudspeakers with low efficiency.

There is physical Waversa no remote, but there is an IR input and you can use any generic Apple remote (like for a Apple TV) to control it.

NOTE: A generic Apple Remote will be included in the box.

The unit is conservatively rated an 8: scratches are less than 1/2".

The unit has always been in a smoke-free child-free environment.

The unit will be safely BOXED andINSURED with lots of packing.

Buyer pays for shipping and insurance.

WORLDWIDE SHIPPING AVAILABLE only to countries where I can get proof of delivery.

Barring unforeseen circumstances, shipping will go out within 48 hours of wire payment received by my bank.

Please check my outstanding feedback on Audiogon and purchase with complete confidence.

NOTE: Seller reserves the right not to sell to buyers with less than excellent feedback.

Legitimate offers will beconsidered; low-ballers will be ignored. 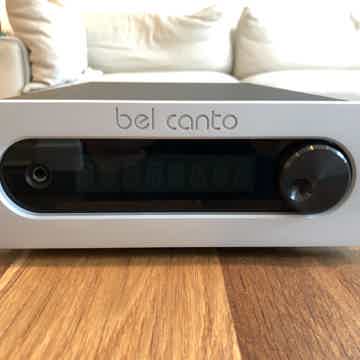 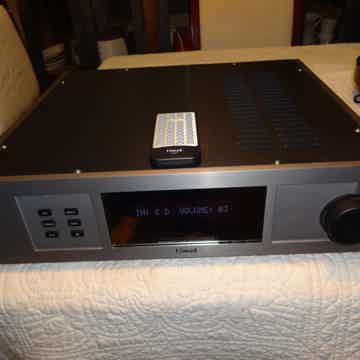 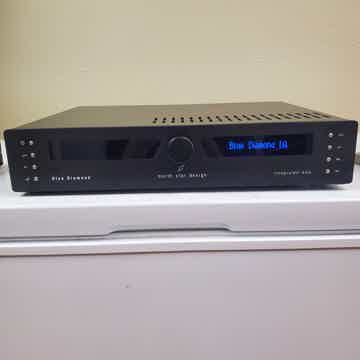 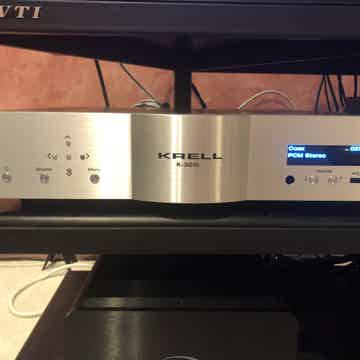 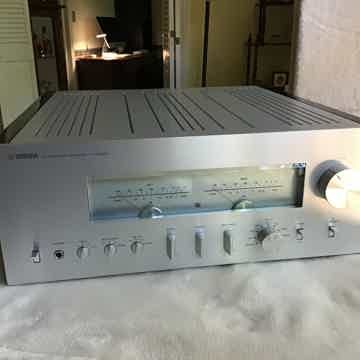