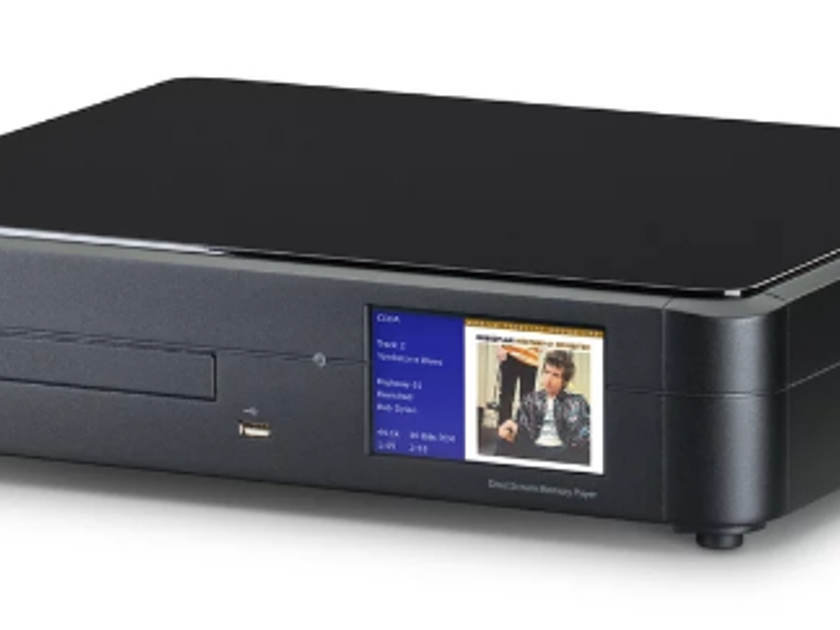 We are AudioVision San Francisco, a high-end audio and home theater retailer in the heart of downtown SF for 20 years come next year. As one of the largest hifi shops worldwide, with just about mor...4999.00

We are AudioVision San Francisco, a high-end audio and home theater retailer in the heart of downtown SF for 20 years come next year. As one of the largest hifi shops worldwide, with just about more experience than any brick-and-mortar shop in existence, we are certainly what you would call "the real deal."

Thus, we are dead serious on what we are selling, you will get what you pay for, as described, with dealer support behind it. All of our items are priced to sell, and with that price we include free shipping. Feel free to call us anytime at 415.614.1118 to discuss, or email us at [email protected] Once again, serious inquiries only please!

Also, check out our other specials listings on our website! http://audiovisionsf.com/?page=specials

Up for sale today we have a truly wonderful disk transport - the PS Audio DirectStream Memory Player!  Ours is very minimally used and in great condition, and as a former PS Audio dealer (before they went direct) - this unit comes with a full warranty from date of sale to you, as well as all the original boxes and accessories!

Our unit is in black finish, and at this price, we are also including free shipping!  This item is priced to sell, so please - no lower offers!  We are more than happy to provide more photos of the unit in question - but let's agree to the selling terms first before we go through the extra hassle!  As always, feel free to call us anytime at 415.614.1118 to proceed or discuss!

Plus, hear SACD for the first time

The protected DSD layer of SACD has long been available only through D/A converters built in to players and a few receivers and surround processors. These internal D/A processors, while adequate, were never capable of playing back stored music at the quality and performance levels enjoyed by mastering engineers. Now, with the introduction of PS Audio’s revolutionary new memory player, DMP, owners of our DirectStream series of DACs can uncover all that they have been missing. Based on a proprietary handshake protocol between DMP and PS Audio DACs, through our advanced I²S interface, pure DSD is streamed to, and processed in, the same reference quality DAC used by mastering engineers.

At the heart of DMP is an advanced version of core PS Audio technology, the Digital Lens. Invented in 1993 by PS Audio founder Paul McGowan and chief engineer, Bob Stadtherr, the Digital Lens focuses digital data into a perfect stream, unaffected by the transport’s mechanical and electrical properties.

In digital audio, timing is everything. Jitter, noise, and a lack of isolation have major impacts on sound quality, especially affecting lower resolution media such as CD.  DMP’s advanced Digital Lens technology solves timing, noise and isolation problems through a unique combination of buffer memory and FPGA based digital processing.

Up until DMP’s advanced Lens technology was introduced, the internal Digital Lens found in the older PerfectWave Transport, relied on an intelligent RAM buffer to isolate digital data from the mechanical optical drive and laser mechanism. Separated from the CD reading device, data accumulated in the Len’s buffer until output through a fixed low jitter clock to the DAC.

DMP’s advanced Digital Lens and low-jitter fixed clock perfectly focuses the isolated datastream to the I²S, coax, or AES/EBU outputs directly to your DAC. The results of this fine, perfectly timed data stream must be heard to fully appreciate its full implications.

The Compact Disc was first introduced in 1982, nearly 35 years ago, as of this writing. Over the years, steady progress has been made improving its musicality. But retrieving all that is possible from this optical medium has remained somewhat elusive until the introduction of the DMP.

Most engineers in our field, including our own, failed to recognize the critical need for timing perfection to appreciate all that is available on CD. Not until 2009, with the introduction of the PerfectWave Transport, did we begin to understand that there was more to CD than we had ever imagined.  The PWT demonstrated that careful extraction of data, coupled with isolation of the output clock, yielded unexpected benefits: more information than we knew existed.

Our next uncovering of what treasures lay hidden in the CD was even bigger. DirectStream DAC. DirectStream DAC’s inventor, Ted Smith, opened our eyes to what was possible to render (playback) from the original optical storage method—once believed to be so lacking that only higher resolution upgrades could salvage the sound.

The PWT opened our eyes to what could be extracted, the DirectStream DAC turned the lights on for what could be rendered, and the DMP has finally opened wide the door to what is possible when extraction and timing are near-perfect.

DMP enjoys a new user interface that includes song titles and tracks that can be read from a distance. Like its predecessor, the PWT, album art can be automatically downloaded when DMP is connected to the internet.

Every time you play a disc (and are connected to the internet) a copy of the cover art and song titles are kept for you on your own private library page, accessed through our website. From your personal page it is a simple matter to correct any of the CD’s information, change cover art and polish your CD collection.

Sony and Philips corporations introduced the CD’s successor, the SACD (Super Audio Compact Disc) in 1999, 17 years after the original launch. Instead of downsampled PCM from higher resolution original recordings, which many Red Book CDs are based upon, SACD held the promise of access to the original master tape or recording through a new format, PDM (Pulse Density Modulation) that Sony and Philips rebranded as DSD (Direct Stream Digital).

Because this new high resolution digital format was essentially identical to the master tape, strict copyright protections were put in place to protect the rights of artists and recording labels. Those protections remain in place today, as well they should. Most collections of SACD have only been heard through Sony/Philips authorized DACs, internal to the players, unavailable as a separate digital audio datastream to external DACs.

PS Audio’s DMP is one of the first transports to provide external access to the pure DSD layer on SACD. DMP can do this, legally, because the raw data stream cannot be copied. DMP owners with PS Audio’s DirectStream DAC, or DirectStream Junior, can access this encrypted layer through our unique I²S interface. Once connected, DMP authenticates the presence of a PS Audio authorized DAC and, for the first time, listeners can get closer to master tapes than ever thought possible.

There are three ways to get digital audio data out of the DMP: S/PDIF, AES/EBU or I2S HDMI. I2S is the preferred method if you have a PS Audio DAC or any manufacturer’s DAC that can receive it. Three such I²S interface are provided, allowing for 6-channel high resolution audio to be streamed from DMP.

S/PDIF (and AES/EBU) are the standard delivery methods found on all transports and, while excellent, remain a compromised format.

Standard digital outputs take three separate internal clocks along with the raw music data and combine them into one stream to the DAC. This mashup of music and clocks causes the audio to sound flat and harsh compared to I2S.

A much better way of delivering the music is what I2S does, by transferring the clocks and data on separate wires within the HDMI cable, and the audible results are impressive. Simply use any HDMI cable between the DMP and appropriate DAC and you are transferring data perfectly, through I2S.

A growing number of DACS and devices are adopting the PS Audio HDMI standard for digital audio transmission because of its superior audio quality.

Clean and well-regulated power is essential for a high-performance universal disc player like the DirectStream Transport. Instead of the typical switch mode power supply, a fully analog approach is taken with DMP.

Each of the three power storage banks are then double regulated by discrete, linear, voltage regulators which reduce ripple to the microvolt level and lower impedance to well below an Ohm.

The front panel USB input on DMP is available for small music collections stored on USB drives. Plug in a USB thumb drive and its contents can be accessed and played back through DMP. While the instrument itself is capable of handling large numbers of tracks, selection can become cumbersome if there are too many.

Tracks from the data drive are displayed in small groups on DMP’s touch screen, and navigating larger libraries can be time consuming. PS engineering added this input as a courtesy port offering quick access to a friend’s favorite album or track. We imagine being at a consumer audio show and customers wishing to hear music stored on their thumb drives will find this input convenient and excellent sounding.

Many high-end audio music lovers still have large CD collections as well as small to medium sized SACD and high resolution PCM (like HRx) libraries. Few of us are eager to unload the hundreds, often thousands, of discs we’ve collected over the years. But we know there’s far more to be gotten off those discs than most of us now enjoy.

The DirectStream Memory Player changes all that, disrupting the status quo, changing what’s possible in the digital audio landscape.

Owning the DMP is an investment, one that will pay off in a rich musical experience for years to come.

DMP offers the chance to hear what you’ve been missing on your discs, whether Red Book CD, CDR’s from downloads, HRx, or the master DSD layer on SACD. You’ve invested much in accumulating your music library. Now, it’s time to really hear what’s been locked inside for so long.

DMP is the finest transport mechanism we know how to build.

We trust you’ll enjoy the new DirectStream Memory Player as much as we do.

Perhaps the last great transport ever made

The chassis of the DMP is a metal sculpture of aluminum and steel, weighing in at 20 pounds of elegance and beauty. The top cover is a hand painted, hand polished piano black cover that has been lavished over for hours.

The DirectStream Memory Player has been a work of passion; a quest for perfection in musical excellence. The instrument is assembled, programmed and tested at our production facility in Boulder Colorado by skilled craftspeople. There is a measure of pride of workmanship that goes into every one of these products and it shows from the moment you open the unit up and plug it in.

PS Audio has been building products of passion, elegance and engineering excellence for more than 40 years. Family owned and cared for, PS Audio believes in our products and our customers. Those are not just empty marketing terms so often bandied about in brochures and websites.

Call us, email us, come by and visit our family and enjoy some time in Music Room One.

For the love of music, we’re here for you. 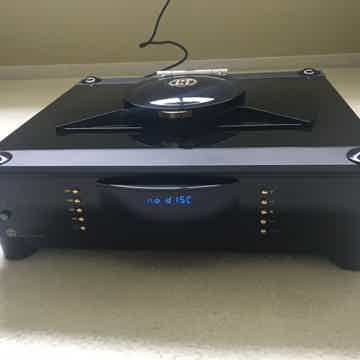 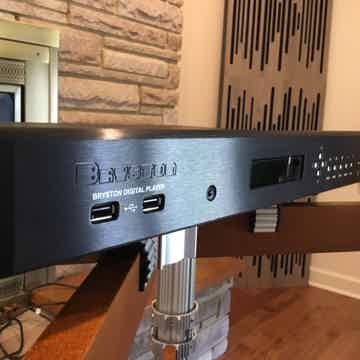 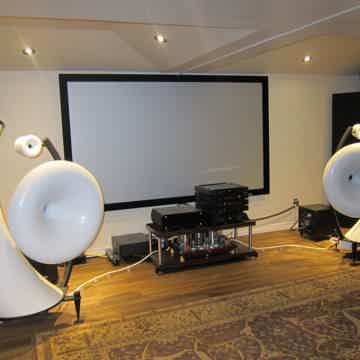