SIGN UP
LOG IN
Nakamichi700usedOriginal Manufacturer's Description: The full-scale 3 head cassette deck which challenged the threshold and likelihood of the cassette from the model which hits the sister machine of try marker N...0.00

Original Manufacturer's Description:
The full-scale 3 head cassette deck which challenged the threshold and likelihood of the cassette from the model which hits the sister machine of try marker Nakamichi 1000.

The completeness 3 head scheme is adopted. It combines with the constant tension effect which a double gap capstan scheme induces by the recording head of a ferrite core, and the erase head and the reproducing head of the hard super permalloy core of the narrow gap of 0.7micro,Adhesion with a tapes also becomes good and is played by flat frequency response to a high region.

In order to correspond to perpendicular gap of the tapes and head which the distortion on molding of a cassette case brings about, the recording head perpendicular regulating function with an alignment beacon is carried.
A coordination is possible only by turning a thumb, carrying out the sound-recording play of the 400Hz built-in signal, offering the adjustment mechanism which a phase progresses and detects the output by delay, and seeing the blinking status of 2 issuance diodes.

The control by IC logic circuitry is carried and all the tapes controls are operationals in one-touch.
Moreover, the timing of the amplifier of a recording play, a bias oscillation, and an operation of a mechanism is also controlled completely, and is suppressing the occurrence of the it1 noise.
The organization of the muting of tone, a memory counter, etc. is carried besides it.

decibel peek level meter is carried in a level meter, and it does not have the care about the excess recording which occurs since a pointer cannot follow a sharp peek input like common VU meter.

The threshold of the mechanism precision of a magnetic tape cassette is conquered from the closed-loop and double capstan drive side.
With the using of a DC servo motor, up until last minute, it is large and properties, such as a wow and flutter, are improved by two flywheel effects which raised the effective mass.

The pitch control which can change tape speed �}6% by play is carried.

The limiter circuit is built in, about 1/of excessive inputs of +3dB or more are automatically pressed down to 7, and the distorted occurrence is suppressed.

The pickup is carried 3 point, the blend mike input besides a right-and-left channel input is prepared, and mixing of a sound effect, vocal, and a solo can be performed freely.

The head base organization in which put in the damper organization and the degree of coherence with a tapes was received is adopted.

The 0dB level calibration unit is carried and it can adjust according to a low-noise tapes and a chromium tapes.

The Dolbey noise reduction is built in.

The main motor of DC servo, and two motors of Mr. winding

The cassette eject with a damper 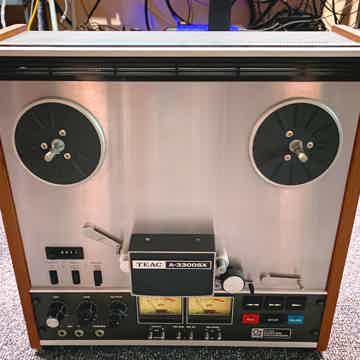