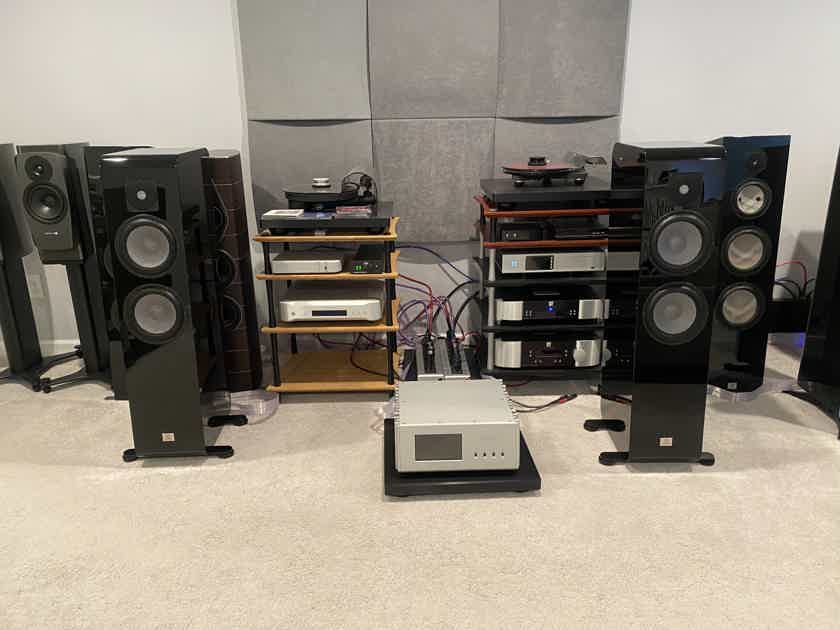 Marten Design Django L speakers gloss black https://www.marten.se/products/django/django-l/ This gorgeous speakers began life here in the USA in the Liquid HiFi showroom and were then sold to a c...5200.00 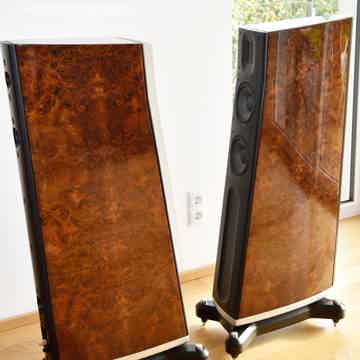 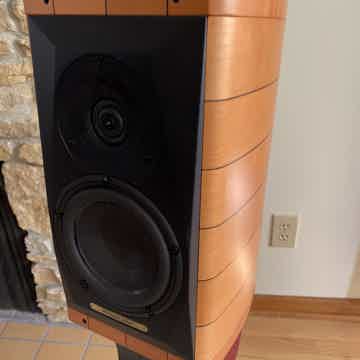 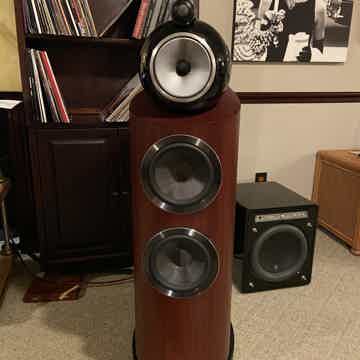 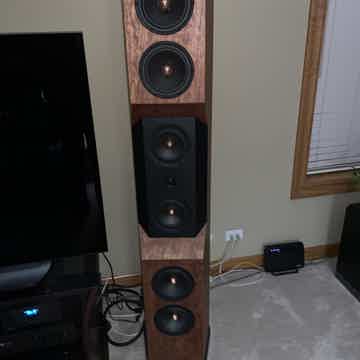 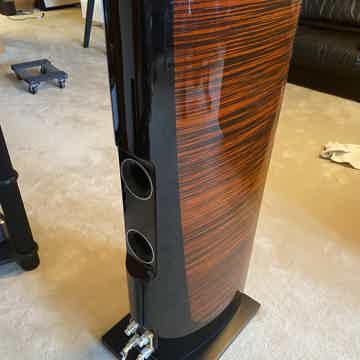 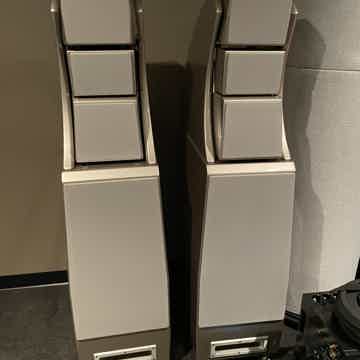 This gorgeous speakers began life here in the USA in the Liquid HiFi showroom and were then sold to a client who traded them back in yesterday to move up the Marten line.  Exceptional condition, exceptional sound, HUGE value for the money, HUGE.

Accuton ceramic tweeter provides intricate detail without some of the downsides of metal tweeters, custom designed SEAS mid/bass drivers provide beautiful vocals and deep bass even with the most demanding orchestral works.

If you are remotely close to our Charlotte NC area showroom and considering these it would be wise to visit and hear them.

Don't take our word for it, read the reviews:

How far can you downscale a concept without it damaging the core of it?

Very far, according to Marten Design.

It was not that terribly long ago I had a Marten Design loudspeaker for a visit. Then it was about the new ‘Django-series’ first design, Django XL, which would provide “80 percent of Coltrane 2 for 20 percent of the price.” I was very impressed. Very. It was simply a raging good loudspeaker. But even though it would bring down the Marten Design’s high-end sound to a more humane price level it was still close to six figures (SEK).

Now, can the little brother Django L deliver 80 percent of Django XL for two-thirds of the price?

Well yes, it can.

You instantly recognise the look if you’ve seen Django XL. The same slanting cabinet with rounded corners standing on Martens own feet, creating a distance to the floor which allows the bass port to be opened downwards.

The cabinet is only slightly smaller than the XL, two inches less in height and even smaller differences on the rest of the measurements. However, the speaker is more than 13 kg lighter. The XL is made of 25 mm MDF and L of 22 mm, plus L contains two units less which explains the weight loss and reveals that we probably have a similar internal volume of the two speakers.

XL is a three-way speakers, L is a two-way. This means that it has completely different elements than L. The tweeter is the same type, ie ceramic, but a quarter of an inch larger so that it will go lower in frequency because the loudspeaker does not have a dedicated mid-register as XL. Likewise, the base units also brings a portion of the mid-registry, and are therefore able to go higher than the elements Marten developed for XL.

The result of this is newly developed elements from Marten Design that was made together with SEAS. It’s a sandwich cone made of aluminium and ceramics, which I have not seen from SEAS before. I spoke with Marten-designer Leif Olofsson about it, and he told me that the new element also has a strong magnet design and they aimed at obtaining an element that as seamlessly as possible can act together with the treble and bring out the type and character of the sound that we now have come to expect from Marten.

When I tested the company’s first model Mingus, once in ancient times I thought it was a speaker who both demanded a good amplifier and especially demanded its placement. It was a little nuisance to get to play well, because everything had to fit together perfectly. I had the speakers for a few years, but after moving house I never managed to get them to play properly in the new room.

It’s different with Django L. The modern Marten speaker does well by being placed properly, but it is not fussy or makes it difficult to get a really good sound. Perhaps not so strange, but it eventually ended up in virtually the same place in space as big brother.

There was a lot I was impressed with when I tested big brother Django XL. Body, soul and feeling, simply a representation that suits my taste of how music should sound through a system. And here comes “on That bombshell”, as they say in Top Gear: little brother Django L surpasses its big brother on these points if one brings in the price difference with the reasoning. Jeez! How far can you really go to shrink a concept?

Yes, you obviously get a bit more of all of the parameters with XL, but the harmony between the elements and the whole feeling of the representation of L is of the highest caliber. One is sitting with a big smile and really enjoying of music. It simply sounds very much like a Django XL. But, naturally enough, with a little less of everything. It means, however, that the quality of what you hear with Django L is in the top.

I tried several amplifiers of various types and prices. It felt as if Django L had a fairly easy load and it was actually very forgiving to the amplifiers that were connected to. With HiFi Consult’s 40th anniversary step in class-A (manufactured by Bladelius) I heard a rendering that should have anyone raising an eyebrow. It was a delightful combination that gave body and soul to the reproduction. It has a large and very transparent clean sound with a remarkably nice black background and lovely dynamics through the entire registry. As usual with Martens speakers you get lots of details, but all the details are not all over the pace, they collaborate to create a seamless and homogenous sound.

With sound character in mind, I played with great hesitation Body and Soul with one of my house-gods, Joe Jackson. A disc for many years I avoided the use of in testing systems – I do not want to risk getting tired of it, basically. I know it more or less by heart, and still it managed to give me goose-bumps when the trumpet starts playing at ‘Not Here, Not Now’. The album was recorded semi-live at a theater, and Django L can convey tone and atmosphere on quite the right way. Lovely!

The mountain of discs indicates that I played Bach’s Brandenburg Concerts such as 6 to 4 by Chicago, jazz with Bud Powell as well as film scores by Ennio Morricone, heavy jazz with Trombone Shorty and acoustic guitar with Badi Assad. Among a lot of other things. This is a speaker that invites you to listen to every single genre there is.

I can put a special emphasis on the last album, Rhythms by Badi Assad, a Chesky Records disc, where the guitar is recorded about as well as a guitar can be recorded. Django L played the guitar, which is one of the harder instruments to reproduce, in a way where you get as much of the critical harmonics so truthful that it was really enjoyable. That only happens when there are a lot of details which also are totally controlled.

Django L simply has something that sets it apart from the crowd – it has “It”. And “It” is the qualities used to create the display where you really get the urge to listen to music all the time and where the music draws your attention to it in a very special way. “It” can be found in both cheaper and really expensive speakers, but that’s only a select few that has it. This applies to both Big Brother XL and L, but I feel that the smaller L is better value. It is a truly remarkable rendition that Marten has created.

And what comes next? Can you shrink the concept even further, without losing the soul? We wait with expectation of what can come from Marten. I took the opportunity to try and find out if something was going on – a bookshelf speaker, an even smaller floor speakers? However, Leif Olofsson says that right now he is busy with the new incarnation of the top model Coltrane Supreme, which takes up all the time and all the resources at the moment. And that is something else entirely – The price is no object and the same goes for the size. We’re talking seven-digit price for a pair.

Django XL has become such a big success for Marten, and prior interest in Django L is pointing in the same direction, they hardly have physical capacity to produce enough to fulfil the demand for additional a Django model.

Django has become such a big success for the company that it burst all frames of their own optimistic forecasts. However, maybe this is the way it is when one has ‘IT’.

With Django L Marten Design has succeeded in shrinking the concept even further, and given the price, at least as successful as the model XL. It is rather impressing that you can get so much music for the money.

Demonstration available prior to purchase in the Charlotte NC area.
Delivery and setup available within a 100 mile radius of Charlotte NC.  Pallet shipping outside of that area.
Original delrin cones as pictured on the Marten website are included with these.

NO SALES OUTSIDE USA