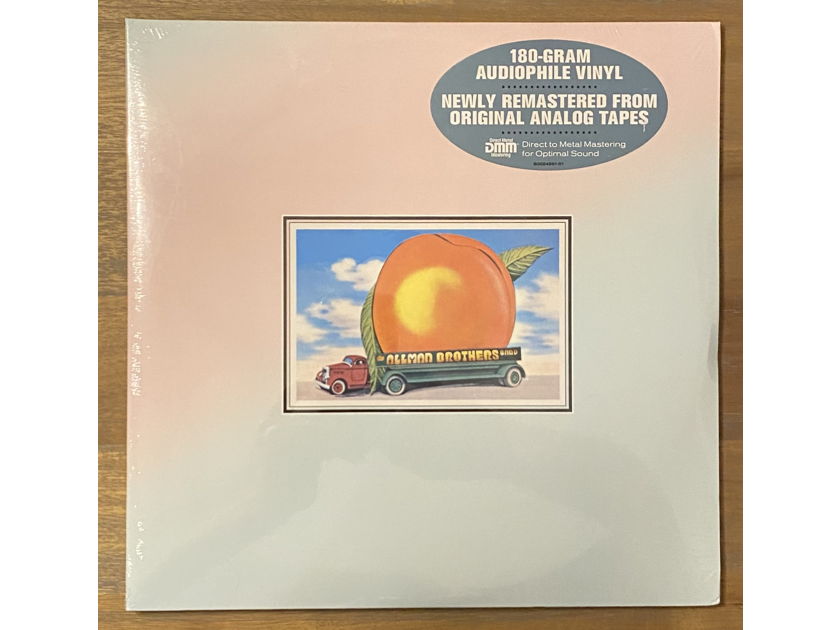 Unopened, brand new, factory sealed, 180-gram audiophile vinyl, newly remastered from original analog tapes, DDM (Direct Metal Mastering) Direct to Metal Mastering for Optimal Sound, 2016 pressing by Mercury Records in the USA (NOT an import!).  Photos on listing are photos of the front and back of the actual album you will receive.  Photos that AudiogoN shows below my photos in the listing, under Album Cover Art, are not my photos, and are not of the actual album listed here. The Allman Brothers Band 1972 double album "Eat A Peach", a mix of live and studio recordings.  On October 29, 1971, group leader and founder Duane Allman was killed in a motorcycle accident in the band's hometown of Macon, Georgia, making it the final album to feature the guitarist. Eat a Peach contains studio recordings from September–December 1971 at Criteria Studios, Miami—both with and without Duane Allman—and live recordings from the band's famed 1971 Fillmore East performances. The album contains the extended half-hour-long "Mountain Jam", which was long enough to take up two full sides of the original double-LP. Other highlights include vocalist Gregg Allman's performance of his brother's favorite song, "Melissa", plus Dickey Betts' "Blue Sky", which went on to become a classic rock radio staple. The album artwork was created by W. David Powell and J. F. Holmes at Wonder Graphics, and depicts the band's name on a peach truck, in addition to a large gatefold mural of mushrooms and fairies. The album's title came from a quote by Duane Allman: "You can't help the revolution, because there's just evolution ... Every time I'm in Georgia, I eat a peach for peace". On release Eat a Peach was an immediate commercial success and peaked at number four on Billboard's Top 200 Pop Albums chart. The album was later certified platinum and remains a top seller in the band's discography.  This is a rare and hard to find item - all the places I have been able to find that list this album for sale online all show they do not have it in stock.