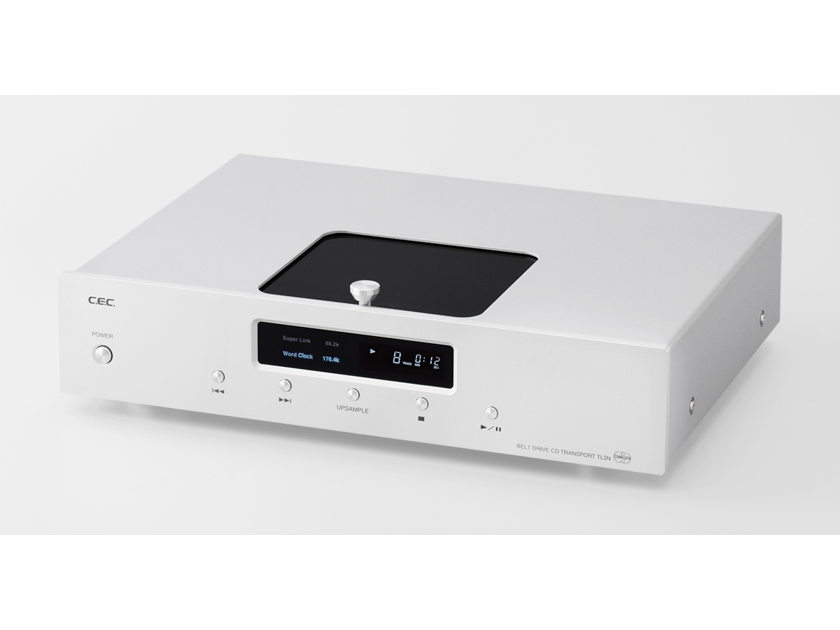 CEC TL 2N CD Transport received RED Fingerprint Award from High Fidelity at the end of 2019 and now we are happy to announce that the combination with our new CEC - TL2N + DA SL Superlink Converter...6200.00

AWARD - BEST PRODUCT OF THE YEAR 2021 from High Fidelity.

New, in the box, ships direct form the factory.

CEC opened a new chapter in music reproduction in 1991 with the world‘s first Belt Drive  CD Transport, the now famous TL 1. Creative mastery of vibration control techniques resulted in this landmark product whose uniquely analog musicality has been hailed as nothing less than revolutionary in digital audio. Since then CEC has continued to improve on it’s designs and launched many globally highly acclaimed and awarded devices. With the new CEC TL 2N CD Transport, the breakthroughs of the previous double belt drive system have been refined even further than we imagined possible. The double belt drive mechanism is a completely new development that is fully centered on a larger aluminum chassis for increased stabilization of rotation and no adjustment of mechanism height. While the double belt drive system  with the large diameter precision flywheel stabilizer improves the accuracy of reading the music signal. The detail, richness of tone and spatial information are just breathtaking. The concentrated application of technical knowledge, innovative capacity and decades of experience have paid off. Pride, Craftsmanship and music reproduction on compact disc have reached a new summit with the CEC TL 2N double belt CD Transport. When the TL2N is paired with the new DA SL dac with "Superlink" the product is greater than the sum of the parts yielding an unparalleled CD sound source in its price range.

In order to read the signal recorded with Constant Linear Velocity (CLV) on the CD, rotational speed should be decreased as it tracks the outer edge of the disk. Usually the spindle motor controls the variation of speed. All CD players and transports place the spindle motor beneath the turntable for the CD and the motor shaft works as the turntable center, this is called a direct drive system. The advantage of the CEC belt drive CD system over the normal direct drive has been proved by the long life of CEC’s world’s first belt-drive system, since its introduction in early 1990’s. Simply, in order to eliminate the vibration and electromagnetic noise from the motors (both spindle motor for CD and feed motor for laser pick-up) a double belt-drive system has been utilized, enabling the motors to be located away from the spindle and laser pick-up. A large (Ø 12cm 380 grams) stabilizer to the turntable itself, increases the effective mass and inertial stability, high flywheel effect, stabilization of the disc rotation.

The proprietary CEC SUPERLINK connection system transmits music signals and synchronization clock signals separately with 4 BNC 75Ω cables, requiring no encoding/decoding process for data transmission, and using the master clock generated by the D/A converter to achieve a closed loop synchronization. The transmission system minimizes deterioration of the music signal and jitter. Sampling frequency of CDs is 44.1kHz, this can be upsampled to 88.2kHz or up to 176.4kHz. (High resolution field covers even 96 and/or 192kHz as well. CEC’s listening test shows 88.2/176.4kHz sound better than 96/192kHz). Up-sampling is not useful and feasible with SUPERLINK. Enjoy the rich and musical sound reproduced by the new double belt drive CD transport TL 2N with the CEC’s proprietary technology.

The musical cohesion, the rich detail and emotionally gripping „analogue-like“ sound is immediately apparent. No other CD drive has sounded so analogue. With the new CEC TL 2N, one can benefit from the advantages of this type of drive.

Test reports in international magazines as well as the testimony of our satisfied customers worldwide confirm that we have exceeded our musical objective: music reproduction on it‘s highest level.

“.. Thank god, companies such as CEC exist who have spent decades consequently working towards an objective of achieving the most authentic sound experiences as possible with the technical further development of CD playback and always come up with brilliant innovations. The new CEC TL 2N CD drive is undoubtedly one of them.. I can clearly understand the manufacturer’s statement for a voluminous, spatial yet very detailed sound pattern..” Review from HIFI STARS – 2017

"And at this point please allow me to come straight out with it: Tonally, there is no alternative to the Superlink interface. Any other way of connecting drive and converter results in an audible loss of precision and reduced smoothness in the sound. As if these are not enough exotic connection options for the TL 2N: A „Word clock“ input in BNC format allows the synchronisation of the read-out data with a clock specified by DAC. This is something great for applications where no Superlink connection is possible."

"In fact, the performance of the new mechanism is so impressive that it has forced a major update in the twin-belt design -- hence the new TL2N. But the best news of all is that the new TL5 comes in considerably cheaper than the TL3N it replaces – around €1000 less, depending on country. With both Marc Mickelson and Roy Gregory using CEC transports on a regular basis, you can be sure we’ll be keeping a close eye on these new, more affordable models."

SUPERLINK is CEC’s proprietary digital signal transmission system that transports music signals and synchronization(clock) signals with separate cables. The SPDIF (Sony Philips Digital Inter Face) and AES/EBU(Audio Engineering Society/European Broadcasting Union) systems, commonly used in coaxial digital outputs and optical outputs, transmit both the music and clock signals through the same cable, and thus are prone to jitter effects caused by the signals interfering with each other. CEC’s SUPERLINK system transmits these signals separately with multiple cables, requiring no encoding/decoding process for data transmission. It minimizes deterioration of the music signal during transmission by using the clock signals from the D/A converter’s master clock generator to achieve complete synchronization. SUPERLINK is on TL2N, TL0 3.0, DA0 3.0, and the new DA SL.

MCK(Master Clock): The CD transport receives the master clock signal from the D/A converter through this line, and functions as a slave to the DA converter, enabling completely synchronized transportation of audio data.

DATA: Sends audio data from the CD transport to the DA converter.