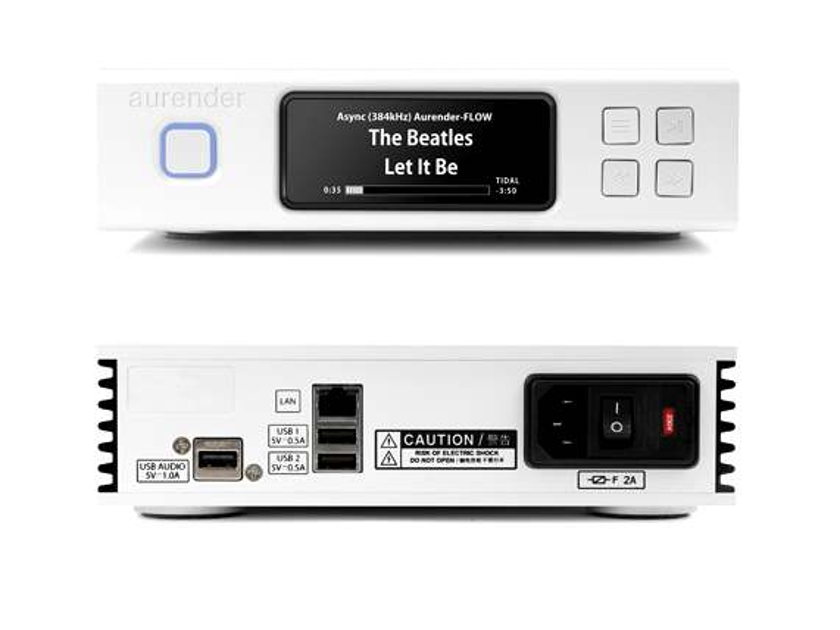 IN BLACK!!! Dealer Demo - Factory warranty starts at time of purchase Music Streamer/Server All Aurender servers have used the Conductor app. Unlike a CD player, which is operable from both its...2188.00 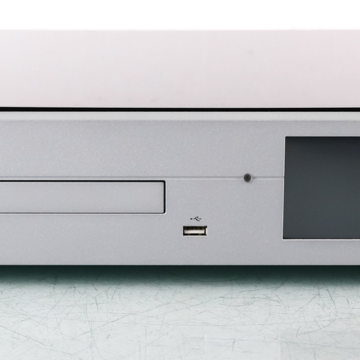 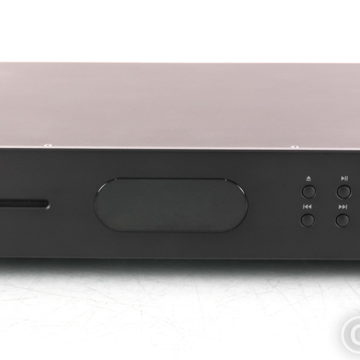 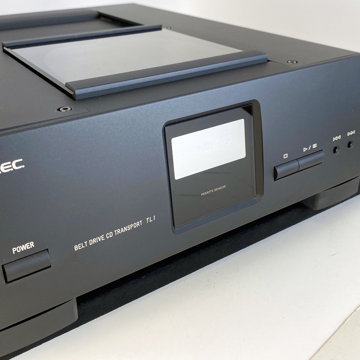 All Aurender servers have used the Conductor app. Unlike a CD player, which is operable from both its front-panel buttons and its remote, a server’s remote-control app is really its only user interface; the app largely determines the user’s experience with the server. The other part of a user’s experience of a server is in setting it up. I describe both aspects of the N100H below.

The N100H, Aurender’s smallest music server, has a narrow case 8.4”W x 1.8”H by 13.8"D and weighing 10.1 pounds. The N100H’s dimensions allow it to share a standard rack shelf with another half-width component, which is handy. Like all Aurender cases, the N100H’s is made of thick aluminum plates with heatsinks along the sides. It looks like a power amplifier -- in fact, Aurender makes a matching 100Wpc amp-DAC combination, the X725 ($2499), designed to partner the N100H or X100L servers. If one of those servers is your only source, the X725 should make a visually attractive system. The N100H is available only in silver, with black heatsinks. The warranty covers parts and labor for two years, which is reasonable for a component at this price.

The N100H is designed to work with music stored on a network attached storage (NAS) device on your home network or on its own internal storage. The original N100 was designed with no internal storage; Aurender later added a 2TB hard drive and changed its name to N100H. I know of audiophiles with music collections larger than 2TB, but for many, if not most, 2TB will hold a lot of albums, even if many are high-resolution.

The N100H works only in a wired network -- Aurender recommends a Gigabit network using Apple’s Airport Extreme network router. It plays WAV, FLAC, ALAC, APE, AIFF, M4A, and other major formats at native bit and sampling rates up to 32-bit/384kHz, as well as DSD128 files. Via an Internet connection, it will also stream Tidal and Qobuz. Since the N100H’s internal computer uses the Linux operating system, you don’t need a driver for your DAC to play hi-rez files. An advantage of a dedicated server over a computer-based server is that the former’s software is already configured for optimal sound. Since MQA files are encoded as FLAC files, the N100H -- and any other FLAC-capable server -- should be able to play them. It’s up to the DAC to recognize and unfold (decode) them.

The front of the N100H is pretty simple. At the center is a 3” AMOLED display with five lines of information: The top line, in small print unreadable from my listening position 10’ away, tells you the sampling rate of the file being played and the name of the DAC the N100H is connected to. The second and third lines, in text big enough for me to read from my listening seat, indicates what music is being played. The fourth line, again in very small print, tells you if you’re playing a DSD file. Below that is the fifth line: a bar display that shows how much of the current track has been played, and its total length. Since most of the information on the screen also shows up on the Conductor app, you can switch the N100H’s display to simulated VU meters in blue or cream. If I owned McIntosh gear, I know which display I’d use -- the Aurender’s blue meter is a dead ringer for those on McIntosh components.

To the left of the display is an on/off/standby switch. To the right are four buttons that allow you to perform some playback functions, as on a CD player. But the main operational controls are on the Conductor remote app.

Because the N100H has only one output connection, its rear panel is relatively empty. From left to right, the first thing you see is the output jack: a USB Type-A port. One criticism of using computers as servers is that their USB outputs can carry relatively high levels of noise. Aurender’s USB output is designed to eliminate this. Next is a stack of three jacks: at the top, an Ethernet RJ45 LAN, and under that, two more USB Type-As, for external USB drives. At right are the IEC inlet and main power switch. If you want more connectivity, Aurender’s N10 player offers that and more.

The N100H has a linear power supply. Successful streaming requires caching the data that arrives over the network, to eliminate latency and dropouts; a 120GB solid-state drive provides that function. The 2TB hard drive is a 2.5” unit.

Installing the N100H was very easy. I slid it onto a shelf of my equipment rack, which left room for another narrowish component on the same shelf. To confirm that this would indeed work, I placed an Auralic Aries streaming music player next to the N100H -- an easy fit. I then connected three cables to the N100H: an Audience powerChord power cord, an Audience Au24 SE USB cable, and a network cable.

The N100H comes with a Quick Start Guide that’s a model of its kind -- up to a point. This magazine-size color publication very thoroughly describes how to get started, but unfortunately for a server described as a network music player, it includes no information about how to connect to the network device where the music files are stored. Fortunately, that information is included in the N100H’s full Product Guide, available from Aurender’s website. While network connections are seldom easy, connecting to the NAS on which I’ve stored my music files required relatively little fiddling and, once done, required no further action.

All setup was done through the Conductor app, a free download from Apple’s App Store. However, even when Conductor knew where my files were, it wouldn’t display them; only a few files stored on the N100H’s internal drive showed up. That’s when I learned that it’s necessary to run a separate program, Aurender Media Manager (AMM), to build a database of the music files on the NAS that Conductor can read. The first time I did that, it took nearly an hour to build the database. Then I had to tell Conductor to scan for new files, which made it scan the database and build its own display. Each time I added new albums to my NAS, I had to run AMM again to add them to the database, then rescan the database so they would appear in Conductor and I could play them. These updates took only a few minutes, but this is a relatively primitive approach; every other app I’ve used has scanned the files on the NAS and automatically displayed them on the iPad. I view the need to use AMM as a shortcoming. Ironically, it’s not necessary to use AMM for albums stored on the N100H’s internal drive -- new files are displayed automatically.

Once Conductor had displayed all of my albums, I noticed another problem: many were missing thumbnail graphics of cover art. Fortunately, the rest of the metadata was there, so I was able to identify the albums by their titles. But I prefer identifying albums on the NAS by cover art -- it’s fast and handy. No app I’ve used displays 100% of the cover art, but every other remote-control app I’ve used has done a better job of displaying such art than Conductor, and has done so automatically. Again, this was not a problem with albums stored on the N100H’s internal drive. 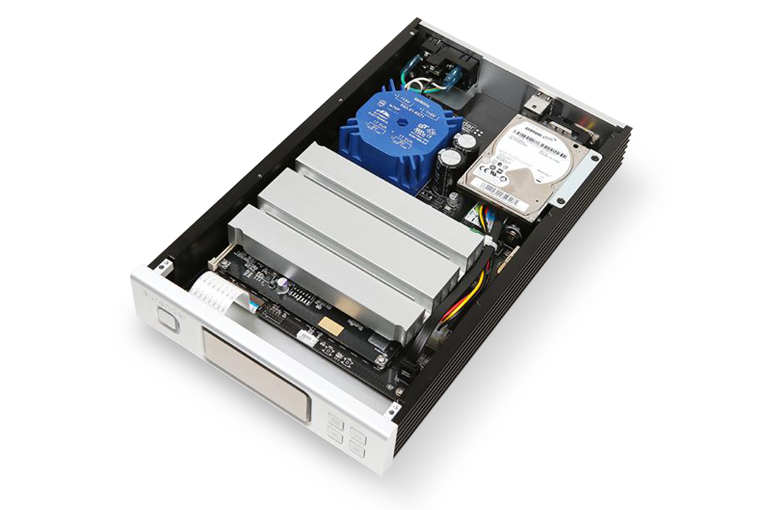 When I set up Conductor to work with Tidal, there was a minor problem, resolved with help from Aurender’s tech support. After that, using Tidal was a pleasant experience. Conductor proved a worthwhile alternative to Tidal’s own playback program, which runs on a computer. And unlike the album covers on my network, Conductor displayed all of Tidal’s cover art. I look forward to the day (soon, I suspect) when Tidal streams MQA files; that should make Tidal a viable alternative to buying and locally storing any music files -- assuming, of course, that Tidal has the music you want to hear. But if you want files not available from Tidal, such as Adele’s 25, you’ll have to buy a CD and rip it. So don’t dispose of your hard drive or NAS yet.

Although I’ve griped about problems I encountered with the Conductor app, once all my albums were loaded into the AMM database, using Conductor was as pleasant as I remembered from using it with the S10. You use Conductor to locate an album you want to play, select it, and display the songs or works on the album. To the left of the track list is space for a playlist. You can select individual tracks to add to the playlist, or click Add All Files and then Play Now, which starts playing the first file on the playlist. If you want to play a different song, just touch it on the Conductor screen. When you’ve finished, tap Clear to empty the playlist and compile another. It’s easy, intuitive, and positive.

Finally, Conductor lets you view the albums on your NAS in Folder view, which is the same as viewing them on a computer’s display. Sometimes, this is the best way to view and play files. For example, when I was evaluating MQA files, I loaded MQA and PCM versions of the same recording into a single folder. It was easier to use Folder view to switch between the MQA and PCM versions.

During the review period, Aurender updated its system software via the Conductor app, and that went smoothly as well. The update allows a user to copy files from an external USB drive or NAS to the N100H’s internal drive -- using Conductor, you no longer need a computer to do this; a neat feature. An update of the AMM program was similar to most updates of computer programs: you download the new version, run an executable file, then sit back and watch as the program is updated. The new version of AMM seemed a bit more streamlined.

I let the N100H play for some 300 hours before beginning my critical listening. Always listenable, its sound became smoother and more limpid after break-in.

The N100H had a relaxed, natural sound that was never stressful to listen to, and lacked any trace of the digital grit I’ve heard from some components. Listening to music over long stretches of time was comfortable and inviting.

My old favorite “Folia Rodrigo Martinez,” from Jordi Savall’s La Folia 1490-1701 (16-bit/44.1kHz AIFF, Alia Vox), sounded very realistic, with well-fleshed-out harmonic structural reproduction of the ancient instruments (or reproductions thereof). The N100H threw a wide, dense soundstage with instruments distributed across the space between the speakers. The deep bass on this recording descends to between 20 and 30Hz, and was reproduced with deep extension and powerful impact. A few times, I considered turning down the subwoofer, but I soon got over that. I was impressed by the N100H’s handling of both macro- and microdynamics, which provided a sense of liveliness and energy. It was obvious that Savall and his band were having a lot of fun as they played their rollicking realization of this ancient musical romp. Instrumental detail abounded; I could always distinguish the percussion instruments clattering in the background (through some components, they merge into a background mush). Leading-edge transients seemed unusually well defined: not peaky or edgy, just sharp and clear.