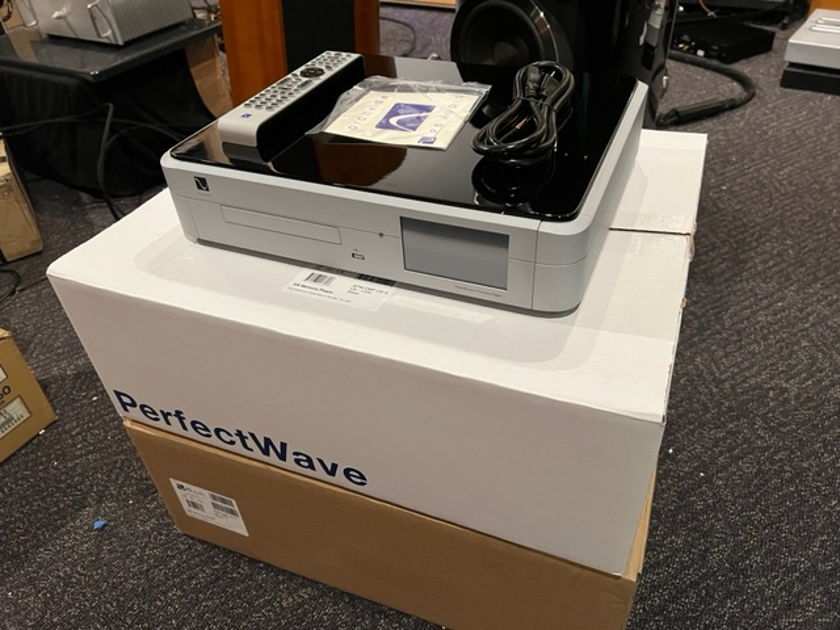 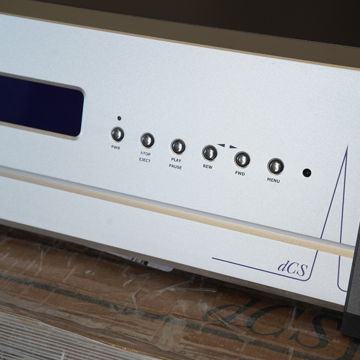 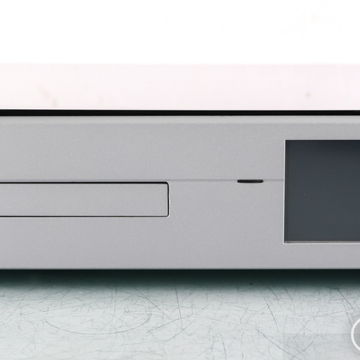 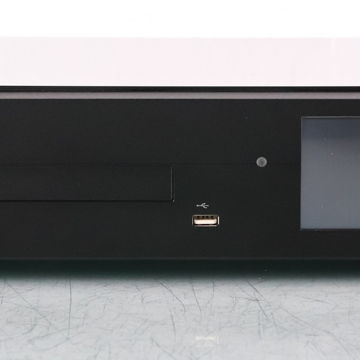 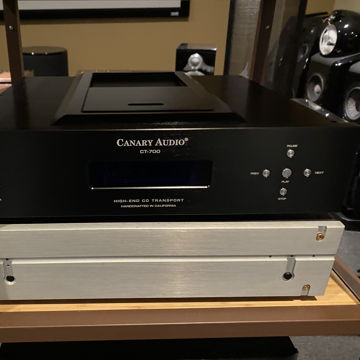 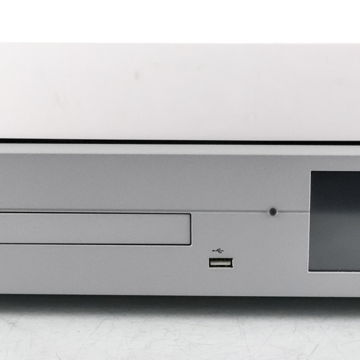 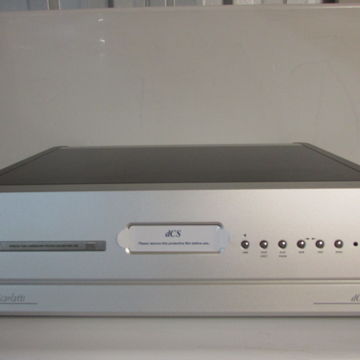 This CD Transport's CD drawer opens but closes faster and works well but you need to put the CD in the drawer quickly. Otherwise it is a superb sounding best of CD transports.

Previous model using the world redound hard memory buffering and best of re clocking for a best of SOUND.

If you have a matching PS Audio DAV+C it can use the Superior HDMI interface used like the inter Ribbon cable used in CD Players (this is considered even better than RCA or AES/EBU Balanced Digital cables.

This is one of the FINEST Transports every made. Uses Memory Buffer for sound quality surpassing virtually all other transports !

On a recent visit to Bleeker Records in NYC, I asked the Owner how LP sales were doing. "Fine, but it is CDs that are really hot". I did my best Labrador Retriever head tilt and quipped "Really?" That was the best I could come up with in the moment, as I was a really caught off guard by his response. After all, the decline of the CD by virtue of the download or streaming has been widely accepted as "progress" by consumers of music all over the world and is simply a matter of fact. CD sales are way down year over year. According to the RIAA In 2115 41.1 million CDs were sold, down from 56.8 in the first half of 2014—a 27.6 percent decrease. With this decrease in sales, come a decrease in title availability and thus a greater interest in the vast second hand market.

So how prolific is the second hand CD market? Since the creation of the Compact Disk, 670.9 billion CDs have been sold to date….WOW! With the onset of downloading and streaming a good deal of those CDs will end up in the used market. Despite those looking back in time embracing Analog tape and Vinyl, and those exploring the era of downloading and streaming, the Compact Disc lives and breaths and will continue to do so for some time to come.

The PS Audio PerfectWave Transport and DirectStream DAC are the Boulder Colorado’s company’s direct assault on the state of the Art Red book CD/DVD audio replay. At $3999 for the PWT (PerfectWaveTransport) and $5999 for the DSD (Direct Stream DAC) the combo comes in at a low-mid range price point for such ambitious products.

According to the web site….The PerfectWave Memory Player reads all CDs and DVDs without jitter or loss. Contents of the disc are read to an internal memory until error-free, with the signal then processed by PS Audio’s patented Digital Lens which removes all digital artifacts. The most often heard comment about the Memory Player’s sound is that it is more "analog" than most. There are two ways to get the digital audio data out of the PWT: S/PDIF or I2S HDMI. I2S is the preferred method if you have the PS Audio PerfectWave DAC or any manufacturer’s DAC that can receive it. S/PDIF (and AES/EBU) are the standard delivery methods and available on the PWT but are not the best sounding. Standard digital outputs take three separate internal clocks along with the raw music data and combine them into one stream to the DAC. This mash up of music and clocks causes the audio to sound flat and harsh compared to I2S and is one of the reasons we designed NativeX. NativeX eliminates many of the problems associated with S/PDIF. A much better way of delivering the music is what I2S does and the audible results are stunning. Simply use any HDMI cable between the PWT and the DSD and you are transferring data perfectly; through I2S. A growing number of DACS and devices are adopting the PS Audio HDMI standard for digital audio transmission because of its superior audio quality.

The DirectStream DAC is unlike any other DAC made. All digital inputs—either PCM or DSD—are up sampled to 10X DSD rate. All processing is handled inside by a custom-programmed FPGA (Field-programmable Gate Array), not an off-the-shelf chip as used in 95% of all other DACs. The greater processing power allows for more-extensive processing than a standard chip, resulting in lower jitter, lower noise, and almost complete separation of digital and analog signals.

A further benefit of the FPGA is that it allows every unit to be updated by the owner in the field as improved as operating systems become available. Since the DirectStream’s introduction in 2014, half a dozen OS downloads have been made available on the PS Audio website, at no cost to users. DirectStream is essentially obsolescence-proof. Inputs include I2S(2), Coax, XLR Balanced, TOSLINK, USB, Network Bridge slot. There are plenty more details available on the web site. Also, the software is upgrade able in the field so obsolescence is obsolete!

The first review sample of the PerfectWave transport had a glitch in the operating system which was promptly corrected with a second sample. Also, scratched discs are not something the transport enjoys. The PerfectWave would on occasion freeze-up and need to be re-booted when presented with a difficult read. I would prefer a program that skipped forward till a clean spot could be found or advancement to the next track if that is possible. Ultimately, this is really on me as I have done a horrible job at keeping my CDs in decent shape. For the review I purchased a few faves and the clean discs were handled perfectly by the Perfect Wave.

So yes, the PerfectWave Transport and DirectStream DAC had a bumpy roll out with me. There is always a "getting to know you" phase that comes with new gear. But once those issue were resolved and the components had a few weeks to burn in (which is necessary to burn off a little greyness to the instrumental color and constricted dynamics) the sound put forth was really something special. I used my 25K analog front end (Triangle Art Signature turntable and Osiris arm with an Ortofon Cadenza Black cartridge and Esoteric E-03 Phono preamp) as a front end reference. The initial impression of the PS Audio Duo is one of staggering dynamics, clarity, and precision. My Lansche 4.1 with the Corona plasma tweeter seemed to be woken from a bit of a slumber as a result of the PerfectWave and DirectStreams’s great dynamic jump. Music has vitality and verve down to a granular level. This is a direct result of the PS Audio Perfect Wave and Direct Stream DACs ability to pull everything, I mean everything, off the surface of the disc and turn the ground beef back into a cow. The musical picture is so complete and vivid, presented without edge or glare of any sort. As a result, high frequencies are rendered with great precision and articulation. Cymbals and synth notes seem totally devoid of added distortion leaving only pristine textures and detail. To me, this is the area where digital has made its greatest strides. Gone are the grainy high frequencies of yesteryear and at a price that while not inexpensive represents a fair trade based on what I’m hearing.

Listening to "Red and Yellow Cabriolet" from Billy Cobham’s Billy’s Best Hits the music feels so organized, so on beat, or in the pocket as my Jazz pianist father used to say. Thanks to out standing super clean transient response notes start and stop so cleanly and clearly. Bass notes really benefit from this as there is no slop, overhang, or bloating confusing the performance… just propulsive low-end extension. With the help of the pair of Golden Ear Super Sub XXL subwoofers, the low frequencies on track 4 "Zanzibar Breeze" are truly epic in reach, tone, and speed. I would say the sound was extremely neutral from the bass up to the mid-bass, so expect no added warmth of roundness.

When the piano takes over the melody on track 3, "Mosaic" the instrument is a completely separate element from the mostly electric instruments in the mix. Surrounded by air and distinct in timbre and color the piano remains firmly anchored in space. The presentation surprised me despite having listened to this track a thousand times. That is no small point. A component that surprises me is not something that happens every day. Revealing something new and important on a track I have been listening to for 15 years is really special and it is here where the PerfectWave Transport and DirectStream DAC really earns their spot on the rack.

Compared to my nearly three times the price analog front end, vinyl had a flow and a liquidity that made the PS Audio duo sound a touch dry. On the other hand the analog system sounded a bit congealed and less see through, an opacity that gave images heft and presence for sure but compared to the light and more lithe character of the PS Audio front end, vinyl sounded a tad bogged down rhythmically. The two differing mediums generally inhabit different musical universes. The clean articulation and dynamics of the PS Audio digital combo engages the mind and gut in a musically compelling way, there is really so much well rendered information to digest coupled to great dynamic jump and power. There is a "realism" to the sound that is very convincing. The analog on the other hand cradles the listener with sweetness smoothness and color. The sound is salient and spacious. Keeping in mind price differential, the PerfectWave transport and DirectStream DAC ultimately make a very compelling case for themselves. A narrowing of the gap between the analog system and the PS Audio digital came as the result of the volume control on the DirectStream DAC. Connected directly to the Mcintosh 301 amplifiers, this feature brings the whole performance one step forward. Everything becomes a bit bigger and closer. On Cowboy Junkies Lay It Down, the title track has never ever sounded better. This is an incredibly well recorded disc with outstanding transparency and a visceral soundstage full of life despite the slow tempo of most songs. The lack of preamp seems to further unleash dynamics and opens up the space around the performers. The sound was also was more organic with a bit less electronic artifice. It is here that I went from being an admirer of the PerfectWave Transport and DirectStream DAC to becoming a true believer.

Attaining the performance provided by the PerfectWave transport and DirectStream DAC even five years ago would have cost multiples of the PS Audio Duo. This potent, engagingly musical front end will allow you to rediscover the plethora of CDs in your collection with a fresh, more organic and dynamic take. And with the millions of CDs flooding the used market the PerfectWave Transport and DirectStream DAC will be a great musical partner standing by your side for years to come.

Highly recommend by me and most of the top reviewers this is a very Musial versatile memory based virtually "no jitter" Transport.

SERIOUSLY ONE OF THE BEST SOUNDING Transports made regardless of cost ESPECIALLY for this price.

Weinhart Design has lots of other items new and used and if you’re in Los Angeles or visiting please accept my invitation to experience our World Class Audio Showroom (BY APPOINTMENT) and please visit our web site @ www.weinhartdesign.com

We are always interested in purchasing quality Audio and Video items, CD & LP collections and most quality trades are welcomed.

We accept payments by Bank Wire Transfers without fees and is the only form of payment on all sales out of the U.S. and Canada. We prefer this method of payment and also makes shipping to addresses other than billing agreeable. VISA, MC and Papal are gladly accepted within the U.S. and Canada as long as the charge is approved and shipping to the billing address on record and adds 3% to cover costs.

one system at a time,

The Audio and Video Expert