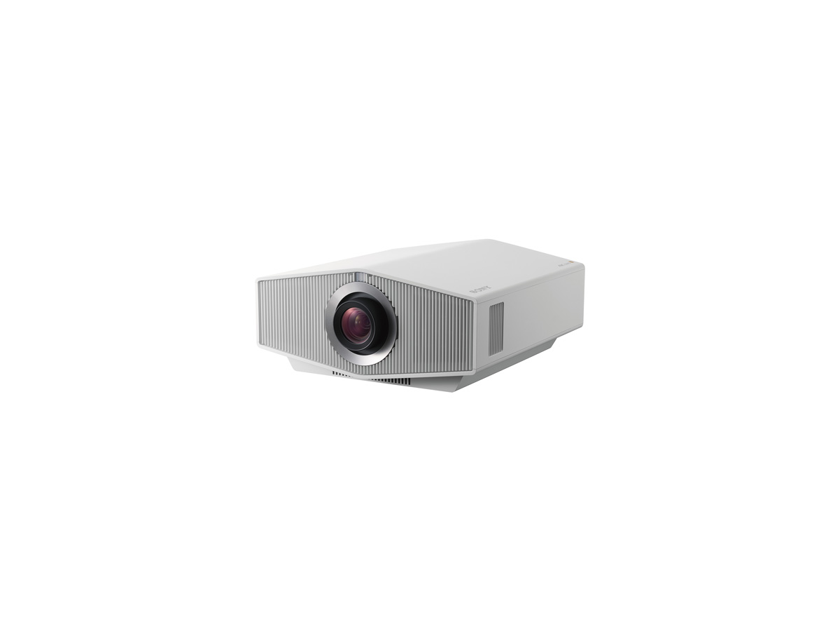 Discover the true big-screen experience with the VPL-XW6000ES. This high-brightness native 4K laser projector delivers crisp, vibrant HDR images, even in well-lit spaces, thanks to a laser light source that generates up to 2,500 lumens of brightness. Newly developed technologies offer wide dynamic range, high resolution, and vivid colors in a compact design that's perfect for your home. 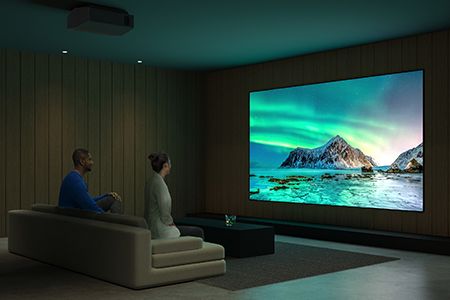 The XW6000 gives you 2500 lumens which enables much larger screen sizes than ever before at this price range for a great projector. 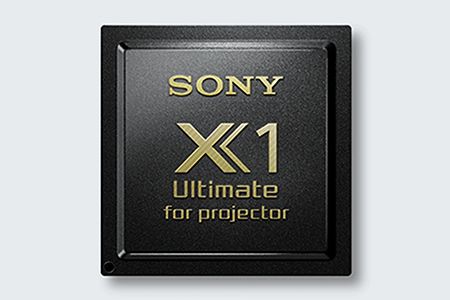 The XW6000 gets a brand new processor purpose-made for projectors that will give you a picture with so much detail, color, and contrast, you will think you are looking at real life. 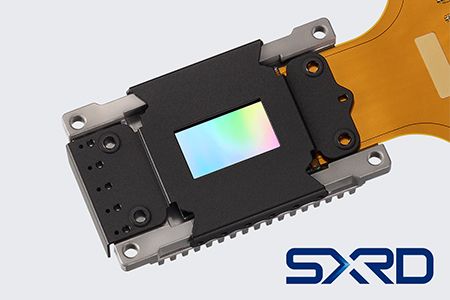 The XW6000 gets brand new 4K SXRD chips, an upgraded layout for more efficient laser output, and a new ACF lens system. All of these add up to better contrast, richer colors, and greater clarity even to the edge of your screen.

SONY has  consistently made great video products. One reason for this is their involvement in filmmaking — from capturing great footage with their cameras to post-production gear that processes the images, and then displaying it on one of their commercial projectors — they touch every part of the movie-making process. There is no other company we know of that touches every phase of content like Sony.

This overview is on the middle model, the VPL-XW6000, which we think will probably be the best-selling unit in the new series.

For those looking to get their first front projector or considering Sony for the first time, we’d like to share a little insight into why we love their projectors. When you touch every part of the content chain, your engineers learn how to deliver the best possible picture. Sony also has the benefit of making professional camera lenses for both video and still-capture images. They have a world of knowledge about the importance of the role the lens plays in image quality.

There are three components that stand out for us and set them apart. Those are — the lens, the video processor, and their SXRD panel. Interestingly, those three aspects are all substantially improved in the XW6000 over last year's model.

For 2022, Sony updates its lamp-based projector in this price range with a laser light engine. The XW6000 gives us 2500 lumens, which means you can do much larger screens in this price range than last year. A bonus with laser is its 20,000-hour life span. That translates into 2 movies every single day for almost 14 years!

The Silicon X-tal Reflective Display (SXRD) panels used in the XW6000 are all-new in 2022. Sony is using 3 0.61” native 4K panels The 4K SXRD panels Sony had been using were engineered when 4K first hit the market a few years ago. Sony re-did the panels when they came out with their top-of-the-line GTZ-380, and this new line of projectors benefits from their learnings. With this brand new panel, they took that tech and went even further. They gave the new panel a flatter reflective surface and added 10% more light reflectance than before. Also, light resistance was improved by 50%. Both of these contribute to even better contrast and brightness, which is a critical part in producing a great HDR image.

Sony also improved the way the panels interact with the laser light engine. There is a new optic design called Wide-Dynamic Range Optics. The three panels are positioned in the optical block in a way to have better light control and maximize the laser light engine. The layout of the laser diodes was changed to a denser arrangement and a new cooling system was added. This gives you higher brightness and contrast improvements, which are even more important with HDR.

Sony video processors are a huge key to their great picture. They have a vast library of images from their involvement in the film industry. These become part of the processor's reference as it makes millions of adjustments to the image to achieve the perfect picture. When Sony released their almost $100,000 top-of-the-line front projector in 2021, it had a brand new processing chip called the “X1 Ultimate” that could work even faster and with better algorithms than ever before.

The” X1 Ultimate for Projector” processor provides improved clarity, expanded dynamic range, and an even larger volume of colors. How they do this is pretty cool as it comes from all of their experience in the film industry.

Sony has two databases of reference images built into the processor chip it looks at for noise reduction and upscaling. The X1 Ultimate for Projector is comparing each frame to these to improve the clarity of the picture.

All while this is happening, the processor is finding dark parts of the image and determining the best way to enhance them with their Digital Contrast Optimizer tech to give us deeper and richer blacks.

You’ve likely read about HDR, which stands “for high dynamic range.” This came out a few years ago, and it initially did not work that well with projectors since it required much more light output than any projector could produce. But, the projector manufacturers quickly introduced new software that analyzes the HDR signal to work well with projectors.

Sony has developed some great technology for handling HDR and it runs even better on the newest processor. Their Dynamic HDR Enhancer looks at every single frame to provide the best contrast to make the dark scenes darker while maintaining great clarity and detail, so you can see fine details in the black areas. It even controls the output power of the laser to provide the best contrast. You can adjust the level this enhancer works at as you will want it more engaged the larger your screen size is.

For 2022, Sony is updating all of their projectors to Triluminos Pro. This first came out in the GTZ380 and gives the system a billion possible colors. With this wider range, you can see finer shades of colors which add more realism to the picture.

The final big update for 2022 on the XW6000 and XW7000 is an entirely new lens system Sony calls the ACF Lens, which means Advanced Crisp Focus. They use a 70mm aspherical lens with 13 glass elements behind the primary lens. Compared to the spherical lens you find on most projectors, their lens has very little distortion at the edge, which means even the part of the image on the edge of your screen will be very sharp and focused.

All projector lenses have multiple internal lenses. Most companies just move one of these groups when you zoom the lens out for different throw distances. This can cause some image distortion. Sony designed a new system, which again, filtered down from the GTZ380 that has a floating and fixed lens group. These move now as you change the zoom to keep the image totally distortion-free. There can also be some color deviation between red, green, and blue when you change the zoom on any projection lens. Sony uses extra-low dispersion glass to prevent this from happening.

This new lens system along with higher light output are a couple of things that separate the new XW5000 from the XW6000, but the big one is the ability to go full widescreen. The XW6000 has motorized lens zoom with memory presets. This means you can have individual settings for different aspect ratios allowing you to get into the wonderful world of immersive widescreen. If you do not like seeing those black bars on the top and bottom when you watch a movie and want to feel more like you are in a commercial cinema, widescreen is exactly what you need.

When you see an image this good on a screen that fills the width of your room, your face will have a grin from ear to ear! For those of you into gaming, the gaming mode for these new projectors brings input lag down to about as low as we have seen on a projector. For 4K60P it is 21 milliseconds and for HD120P a remarkable 13 milliseconds.

So, let's count them up. A new laser light engine with 2500 lumens, a new SXRD panel system for better contrast, the same incredible video processor you get in the top of the line projector, an improved optical system, Sony’s great HDR processing, a very high tech lens system, and finally the ability to do widescreen! These make the XW6000 just an amazing projector, which is why we feel it will be the best selling one in the new group.

With such a powerful light engine we wondered if the projector would be noisy, so we decided to take some measurements. We placed the microphone at the fan’s output and measured just 53 dB, at 3 ft away it dropped to 34 dB, and at 6’ away, it was only 31 dB. Sony has done a great job of cooling the laser engine while keeping the noise down as those lower numbers are below the noise floor in some rooms.

We wanted to find out if the new ACF lens would make these Sony models even better when we measure the difference in light output between the longest and shortest throw range. If you have never installed a front projector, you’ll soon find you will have a range you can position it in. To get this range you multiply the width of your screen by two ratios to get the long and short points.

The new XW Series 4K HDR projectors are going to be Sony's best selling ever and we believe that the VPL-XW6000ES will be the best selling XW Series projector it offers up the most technology we have ever seen from ANY projector we've seen in this price range. We are 100% sure the XW6000 will be at the top of anyone's list who wants a big, bright widescreen image. 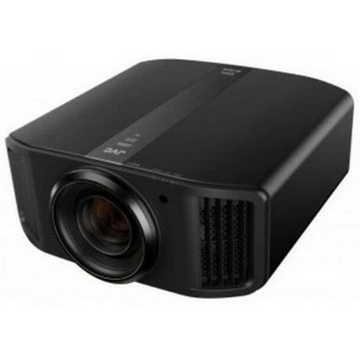 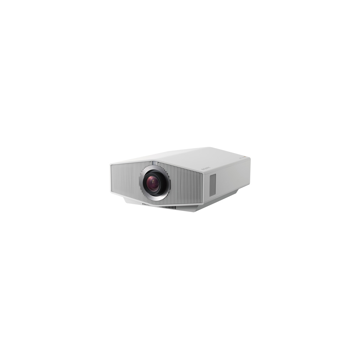 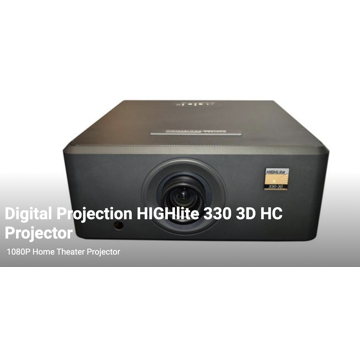