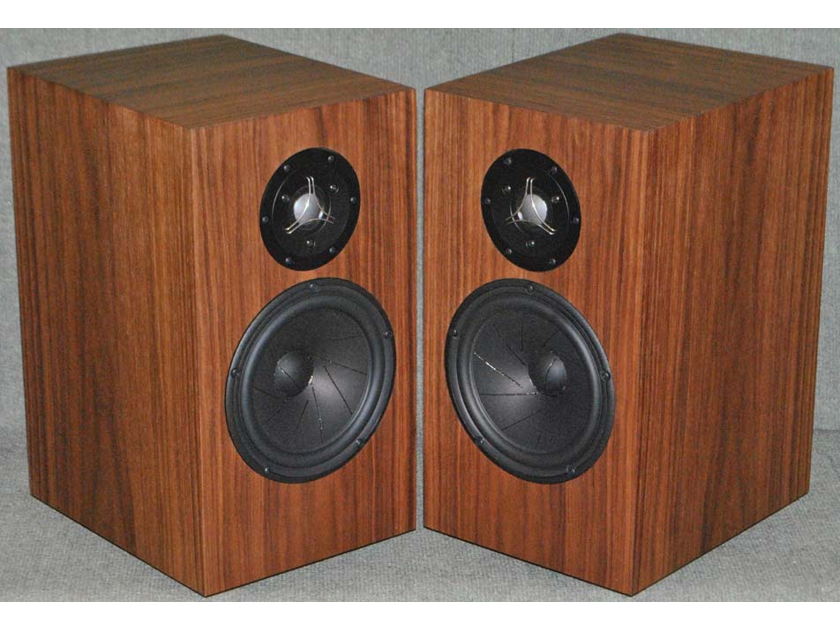 FritzSpeakers Carrera SB BE loudspeakers on sale! Now $3450 a pair! Here's what people who heard my Carrera BE loudspeakers at the Capital Audio Fest back in November 2018 driven by a 8 watt ModW...3450.00

FRITZ SPEAKERS CARRERA BE NOW ON SALE FOR $3450 A PAIR! [Expired]

FritzSpeakers Carrera SB BE loudspeakers on sale!  Now $3450 a pair!

The Fritz Carerra were one of the things I heard that I would consider
buying. They are not speced as being particularly efficient but they
seem to have a very benign impedance curve that allowed them to perform
very well off not too many watts.

They were running on an 8-watt
300B amp from Modwright. Just like my Proac Response 2.5's used to run
on an 11-watt 300B amp from Cary. The bass was really there, from what I
heard this morning. If you don't mind giving up those last couple of
hertz, they're real winners. Well-rounded performers, it sounded like a
really mature design.

I am very interested in small speakers
capable of high performance off fewer watts. The Fritz were the winners
for me probably at the show.

I also really liked the Fritz
Carerra the imaging was spectacular and nice implementation of the Be
tweeter it wasn't bright at all. Very natural tonality top to bottom and
great bang for the buck.

I enjoyed the Modwright room with the
Fritz monitors. I don’t love Be tweeters, but these were good,
especially with the low power MW tubed amp. A great setup for not a lot
of money.

The Fritz Carrera 7BE speakers at Capital Audiofest
sounded terrific off a 8 watt tube amp. I would strongly consider these.
Only 87db efficient but very easy to drive. I was very impressed!

The Fritz's were terrific on 8 watts.

The Fritz's really befuddled me. I didn't expect that bass extension and volume with only 8 watts. Very impressive!

+1
on the Fritz Carrera BE's. I heard them at AXPONA and was very
impressed. Coherent, musical, and -- as stated -- without any
significant sonic errors. I talked with Fritz at-length yesterday (very
nice guy, and super-knowledgeable and passionate about his work) and
learned a lot. I don't understand fully the serial crossover he uses,
but I can attest to the fact that his speakers sound great, better than
many over-priced competitors. If I was in the market for a passive
standmount monitor, my search would likely begin and end with Fritz.
Throw in that he can source a large selection of veneers and it's a
no-brainer IMO. Dunno how they produce a metal-based tweeter that I
like, but the treble is airy and extended. I wouldn't be able to tell
this was a metal dome unless you told me.


Hi- Thanks for looking.  Fritz Heiler of Fritz Speakers here.  I've built
custom loudspeakers since 1973... Yikes, has it really been that long?
Go to FritzSpeakers.Com for links to my 40 reviews of many of my
models including this model below which I got the Editors Choice award
from Part Time Audiophile for my Carrera model below.

Check back for more info and pictures of the speakers available which I will
add in the next few days.  Be sure to check my other ads for more of my
FritzSpeakers designs.

Jack Roberts (Dagogo reviewer) said this about the Carrera's-  "I can tell
you this’ they are the best speakers I have ever had in the upstairs
system.  This would include speakers like the 47 Labs Lens 2, Audience
ClairAudient 1+1V2+, Audio Note AN-Ks, Audio Space’s LS3/5a, Fritz's
own  Accuton 6, Lindemann BL-6, Terresonic Magus, and the GamuT L3."


Jerry of 10Audio is writing a complete review of the Carreras which will
hopefully be out soon.  Here are a few things he wrote in a preview on
the website-

"This review is a work in progress, but I wanted to
post something quickly because this is a superior loudspeaker that you
need to know about.  Here is the summary of my almost 10 pages of
listening notes:"

"This might very well be the best, most
satisfying, most real sounding music that this writer has heard outside
of a concert hall."

"Depending on the size of your listening room
and preferred volume levels, you might find that a high powered
amplifier is not necessary.  Even with the Carrera's sensitivity of 87
dB, the Inspire amplifier, with KT150 power tubes and about 15 Watts,
delivers peak sound pressure levels (SPLs) of 85 dB at the listening
seat (C-weighted fast response). This loudness level is satisfactory for
over 90% of my listening, and only rarely would higher SPLs be
welcome.  More recently, a pair of Cary Audio CAD-805AE SET amps, with
211 tubes, was installed.  This might very well be the best, most
satisfying, most real sounding music that this writer has heard outside
of a concert hall."

"The Carrera BE speaker delivers a human
voice that sounds more like a real, living, breathing person than any
other speaker I have heard.  After hearing this clarity and truthfulness
from your audio system in your listening room, there is no going back."

"The Carrera BE has the best qualities of a single driver speaker.  This
completely coherent performance is at least partially due to the series
crossover between the two drivers, which is inaudible.  However, the
Carrera BE has much better bass and the entire treble range is far more
extended and high resolution than other single driver speakers."

"This review will be completed as time permits. If you are shopping or
thinking about shopping for a 2-way speaker, at any price from any
manufacturer, the Carrera BE should be included in your considerations.
This review began with review loaner speakers, and is now a work in
progress with reviewer owned speakers, which are the same pair.  The
Carrera BE speakers are stunning in their ability to communicate
extraordinarily realistic performers."

Also, check out Francisco Duran's Positive Feedback review of the Carrera BE's.  He also awarded me his writers choice award.

Tweeter:  1 inch SB Acoustics Satori Beryllium dome Tweeter
Crossover: Series crossover without any capacitors or resistors in the circuit
with the tweeter.  Very easy load on any amplifier including low powered
tube amps.

BE SURE TO CHECK OUT MY OTHER UPCOMING ADS FOR MORE FRITZ SPEAKER MODELS!

Check out my web site for 40 reviews of my loudspeakers.
Please contact me for more info. Thanks, Fritz Heiler  FritzSpeakers.Com  310 379 8190

BTW-
Series crossovers actually have variable crossover points. Conventional
crossovers are basically mathematical equations that are separately
calculated based on the impedance of the mid/bass driver and tweeter
used in the speaker.

When music is playing through a loudspeaker,
the drivers voice coils heat up and the impedance and other electrical
parameters can change.  A heated 8 ohm mid/bass driver coil may become 7
ohm, a 6 ohm tweeter coil may become 8 ohm (could be higher or lower
depending on voltage & current), effectively changing the cross over
frequencies of each driver.  The mid/bass could now roll off sooner
(lower) and the tweeter could come in later at a higher frequency... or
vise versa.  This can result in an overlap or suck out between them.

With series crossovers both of the drivers are in the same circuit and the
crossover points fluctuate between the two drivers eliminating the peaks
or suck outs of conventional crossovers.