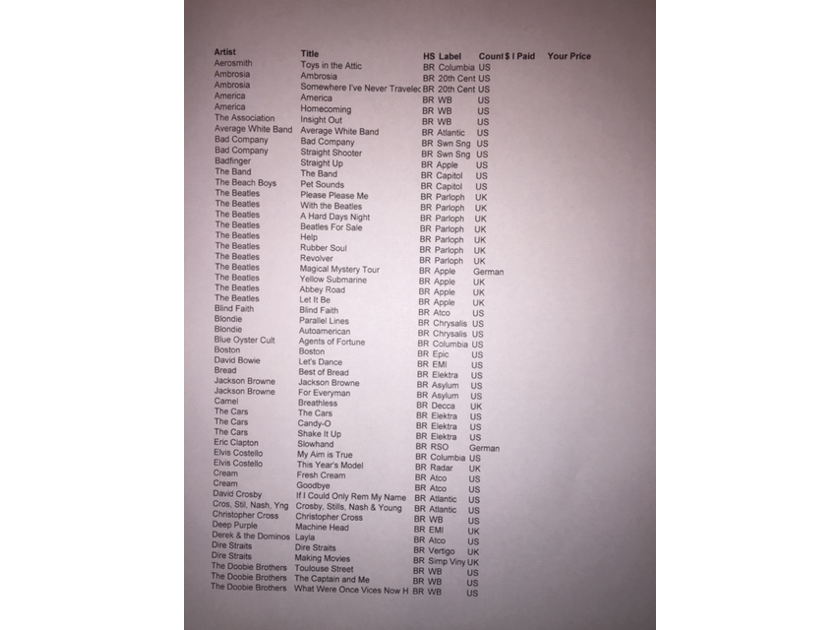 Now here is something you don’t see every day. For sale is my cherished Hot Stamper/Killer Pressing LP collection. For those of you who know what hot stampers are, you will likely find this a uni...12000.00

Madonna You Can Dance Vinyl LP HOLIDAY INTO THE GROOVE ...

Now here is something you don’t see every day.  For sale is my cherished Hot Stamper/Killer Pressing LP collection.  For those of you who know what hot stampers are, you will likely find this a unique chance to acquire many pop and jazz titles that have been selected for their improved sound based on knowledge and comparisons of various pressings.

The idea that I would sell this prized collection of what are some of the best pressings of many titles would have seemed preposterous even a couple of years ago.  It was a major passion of mine and took me many years of diligent work and often significant sums of money to amass this collection of superior pressings.  They fall into two categories, Hot Stampers and Killer Pressings.

Hot Stamper titles were purchased over many years from Better Records who, as far as I know, coined the phrase hot stamper.  BR performed many comparisons on hundreds of titles, which I bought when I had more money and less time to do my own comparisons.  I have 151 of these hot stampers, many blockbuster titles (see attached pictures of the list), and I even kept the sales receipts for all but a few of them.  This ensures confidence that the buyer is purchasing superior pressings of these titles.

The second category is Killer Pressings, my designation for titles for which I did my own comparisons/shootouts when I had less money and more time.  See my other ad here on Audiogon for these.

So the big question is why I am selling them.  Well, the answer is simple.  I got tired of cleaning them on vacuum or ultrasonic record cleaners, engaging in an elaborate turn-on scheme of amplifiers, and fiddling with cartridges, tonearms, and turntables.  My equipment was aging also.  Therefore, I did what many old guys do and sold my speaker-based equipment and bought a headphone-based system using streaming of digital files.  No, it probably doesn’t sound as good in many ways as the big rig analog- and speaker-based system but far simpler.  With my analog system I listened maybe a few times a month; for my headphone system I listen every day.  For a music lover that is paramount.
I have extensive spreadsheets of Hot Stamper titles along with the label, country of manufacture, stamper numbers, and comments on extra information.  To the successful buyer I will be sending this list to prevent him/her from having to compile this information.  For now, I took the attached pictures of truncated versions of these speadsheets showing artists and titles.

For those who are not aware of Hot Stampers and Killer Pressings, let me try to give a short explanation of why they are important.  For every recording on LP, the musical information is cut using a record lathe into grooves contained in the master LP.  Then, for every vinyl LP made from this master LP, this information is pressed into grooves in the LP that is converted by the stylus traveling in the groove to become electrical signals.  Comparing these pressings leads to the best sounding version, i.e. hot stampers and killer pressings.  Often these differences can be greater than differences in electronics.  If you are an audiophile and willing to spend significant sums of money on hardware (I myself just bought an $11,000 DAC), why wouldn’t you spend similar sums to get the best sound from your software (LPs) that further the sonic improvement of your stereo?
Regarding the pricing of Hot Stampers and Killer Pressings, there has been a significant escalation in prices of these records, in a similar fashion to price escalation of electronic components.  Thirty years ago when I became an audiophile in a serious way, $10,000 loudspeakers were rare.  Now, thirty years later they are commonplace, vastly exceeding the increase in the consumer price index over that time.  To amass 151 HS titles today you will spend many tens of thousands of dollars.  I am asking an average $100 for these recordings, a fraction of what I originally paid for them and far less than you would pay now.

All of these records have been cleaned on either a vacuum powered or ultrasonic cleaner and I have personally played every one of them on my previously owned SME 20/2 turntable with Graham Phantom tonearm and Lyra Titan i cartridge, so they are in great shape.  As with all LPs some have a small amount of surface noise but at least VG+ to M- condition.  All of the covers are also in good condition; a few have some minor flaws but completely functional.  In addition, I used aftermarket plastic sleeves to protect my investment.  I wish I could post pictures of all 151 records but unfortunately, it is virtually impossible here on Audiogon to post all pictures of these titles.
Since records are heavy and costly to ship I would prefer local pickup here in bucolic Ojai, California, but also willing to deliver them within a 250 mile drive from here.  Or I can ship them insured anywhere in the US.

For my asking price shipping or delivery and PayPal fees are covered.  I greatly prefer PayPal Friends and Family due to PP fees and new IRS tax rules.

See my perfect feedback here on Audiogon for the past 21 years to buy these gems with confidence.  Frankly, I cannot imagine not delivering on what I promise.  To paraphrase Matthew in the Bible, for what profiteth a man if he shall gain the whole world and lose his own soul.

Note:  I will be on vacation from September 7 through 20 but available for questions during that time.  If you buy this listing I will ship it after September 20.

Thank you for your consideration.