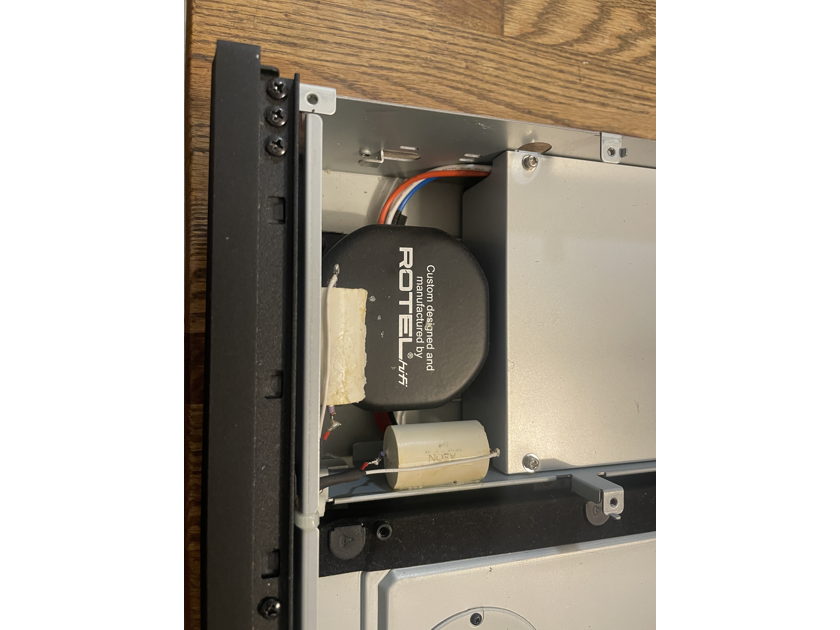 I am pleased to offer for sale one of my favorite OPPO components, It have been upgraded to improve the performance of the SACD/CD SECTIONS as well as the Video performance. Included in the upgr...695.00

I am pleased to offer for sale one of my favorite OPPO components, It have been upgraded to improve the performance of the SACD/CD SECTIONS as well as the Video performance.  Included in the upgrades are all new audiophile electrolytic capacitors (elna silmic etc.), improved power supply, film and foil polypropylene by-pass caps, discreet audio Opamps, etc. The BDF -95 WAS AND STILL IS ONE OF THE BEST SACD/CD Players available, and with the upgrades it rates up there with some of the Reference level players!                                                                            •Very high quality DACs: The BDP-95 uses two 8-channel, 32-bit ESS SABRE32 ES9018 Reference Audio DACs—one of the highest performance DACs in the entire ESS SABRE family. In fact, the ES9018 is similar to the DACs some high-end manufacturers use in multi-thousand-dollar, two-channel SACD players. ESS claims that the ES9018 “is the world’s best performing 32-bit audio DAC solution targeted for high-end consumer applications and professional studio equipment).”
•Dedicated stereo analog output: The BDP-95 offers a dedicated stereo analog output with “specially optimized ES9018 DAC and output driving stages.” Oppo adds that, “each output is driven by 4 DAC channels stacking together to achieve even higher performance.” The stereo output offers two sets of output connectors with different associated drive circuitry. One set provides XLR balanced connectors while the other provides RCA single-ended connectors. Oppo emphasizes, “the balanced output features a true differential signal path all the way from the DAC to the 3-pin XLR connector.” There are even setup options for running normal or inverted XLR pin-out polarity configurations. Frankly, these are the sorts of features you might expect to see in multi-thousand-dollar audio-only players, but that are more-or-less unheard of in universal players selling for under $1000.
•Multichannel analog output: The BDP-95 also offers a set of 7.1-channel analog outputs, which are driven by the second of the two ES9018 DACs.
•Substantial, low-noise power supply: The BDP-95 incorporates a toroidal power supply that, according to Oppo, is “custom designed and built by Rotel,” and that is said to offer “superior power efficiency and much lower exterior magnetic field over traditional laminated steel core transformers.”
•Coaxial and optical digital outputs: Recognizing that some owners will use their Oppo players as digital transports, the BDP-95 provides both coaxial and optical digital outputs. This also means the player can be used with pre-HDMI legacy A/V receivers and controllers.
•Rich disc/media format support: The BDP-95 is a true universal player that supports: Blu-ray Disc, Blu-ray 3D, DVD-Audio/Video, SACD, HDCD, CD, Kodak Picture CD, AVCHD, MP4, DivX, MKV, FLAC and WAV from recorded discs or, where feasible, from USB or eSATA drives.
•Direct DSD bitstream output: Though this may seem a small point, the BDP-95 is set up so that, when playing SACD discs, it can output direct DSD bitstreams (the native SACD data format) or convert SACD content into LPCM format.
•Dual HDMI outputs: The BDP-95 supports dual HDMI outputs and thus allows one system setup configuration most universal players cannot support: namely, a configuration where one HDMI output (potentially set up to provide video data only) feeds the display directly, while the other HDMI output is used purely to provide high resolution audio data to an A/V receiver or controller. One scenario where this could be particularly helpful is in using the BDP-95 to play 3D Blu-ray content to a 3D-capable display, while using an earlier generation, non-3D-capable A/V receiver or controller.
•Expanded bass management options: Unlike the earlier BDP-83-series players, the BDP-95 gives users an expanded range of subwoofer crossover options, including settings for: 40 Hz, 60 Hz, 80Hz, 90 Hz, 100 Hz, 110 Hz, 120 Hz, 150 Hz, 200 Hz, and 250 Hz.

Video highlights: The video features set of the BDP-95 closely mirrors that of the BDP-93. Key features (shared, in this case, by both players) are as noted below.

•Up-to-the-minute, high-tech video processor: At the time of their release to the market, Oppo’s players have traditionally made a point of offering the very latest and most powerful onboard video processing devices, and the BDP-93 and BDP-95 are no exception. Both incorporate the second-generation Marvell Qdeo Kyoto G2 video processor, which provides:
oVideo noise reduction.
oCompression artifact reduction.
oIntelligent color, contrast, detail, and edge enhancement.
oDVD (or other video format) upconversion to 1080p.
•Source Direct mode: As in the Audio discussion above, Oppo recognizes that some owners will want the BDP-95 to serve as a “digital transport” for use with external video processers. Accordingly, Oppo provides a “Source Direct” mode where the player outputs A/V data as read, with “no processing or alteration.”
•True 24p Video: The BDP-95 supports playback of video content captured at 24 fps, “the same frame rate as the original movie’s theatrical release.”
•Multiple Zoom Modes: According to Oppo, the BDP-95 supports “multiple levels of aspect ratio control and image zooming, including a vertical stretch mode for customers with a 2.35:1 CIH (Constant Image Height) display system.”
•Dual HDMI outputs: As mentioned under “Audio highlights,” above, the BDP-95 provides dual HDMI outputs, with separately configurable video settings for each (in fact, the HDMI 1 output can be configured to output video data only).