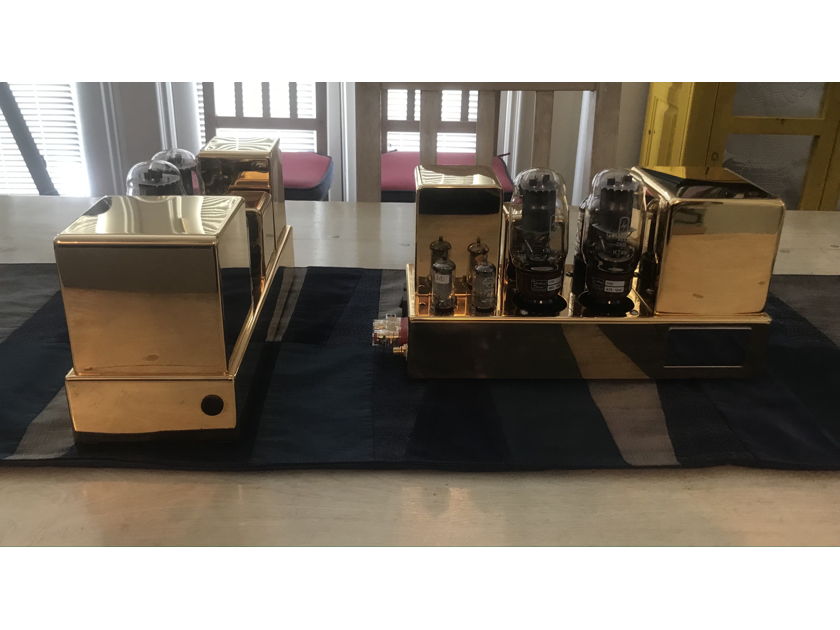 This pair of pristine Quad II Jubilee amps are from the limited run of 600 pairs commemorating the 60th anniversary of the founding of Acoustical Manufacturing Ltd., in 1996. Of the 600 pair built,...3575.00

This pair of pristine Quad II Jubilee amps are from the limited run of 600 pairs commemorating the 60th anniversary of the founding of Acoustical Manufacturing Ltd., in 1996. Of the 600 pair built, only a few were made with US voltage power transformers. This pair are for US voltage, 110-120vac. The QII Jubilee is also the final run of Quad II amps made in the UK. All production since has been Asian.

Aside from the richly-plated true gold case, internal parts were upgraded and precision-matched and the power and output transformers are believed to be wound to a higher standard, with higher grade steel cores. Having had regular production UK Quad IIs, I can say directly, these sound better, delivering more transparency, speed and heft than the original.

Now, if you do some searching you may come across  from '96 or '97 where that slights their sound over the original, for being too modern. In retrospect, I believe there are three reasons for this. First is that given the production year, 1996, was before the explosion of quality audio tubes from China, and during a difficult era in Russian production, and after the last of the western producers ceased production, the Jubilee was shipped with a quad of Chinese power tubes labeled as KT66, but neither the glass nor the internal structure resembled any KT66 tubes made up to that point. Examining that tube shows it to be more like a KT100 structure. In any case, the original tubes sounded bright and a little hard. Next, the EF86 input/driver pair were then-contemporary Russian. And the GZ34 rectifier was very inexpensive Chinese. Third, I think the romance of the long-established Quad II amplifier established a bias for its vintage, less objective sound.

What a difference retubing these amps made! With either NOS KT66 or 6L6, or modern-production KT66, they regain the grace of the original sound, but bring better bass, more slam and spatial projection. There's near-SET midrange-magic. I've long contended that the Quad II amps are the most SET-like push-pull amps you can find.

I am including the JJ rectifiers because of the modern GZ34 tubes, it is the most "elastic" and musical. A NOS Mullard GZ34 sounds too tight. Another good modern GZ34 is the one in TheTubestore Preferred Series. For a bit more beauty, find a pair of NOS or near-new-test 5v4 rectifiers online. They are still plentiful. That's what I have used most of the time in these amps.

This pair of Quad II Jubilee have had an easy life. They have not been the main amp at any time for either of my systems but have been used enough to keep the power supply caps properly formed and maintained. They are super clean inside and out. Premium in every way, and rare. This pair have serial numbers 0009 & 0010. Output terminals are configured to the 8 ohms OPT tap on each. One little-known fact about the Quad II is that if you put a 16 Ohms speaker (like my Zu Druid 6) on the 8 Ohms-connected tap, the amp delivers the highest percentage of its power in Class A. I

I bought these new around 2010 from a UK Quad dealer who found them NOS in his warehouse. I brought the power supply up softly via Variac and they have been completely trouble-free. I say they are in excellent condition but mint could be justified.

The black metal tube cages are included, which have never been mounted, along with the supplied white cotton gloves and yellow flannel amp dust covers. Also included are eight brass-points-tipped ebony cones for feet. I have attached the female cone receptors on the bottom of each amp so the cones can be inverted and stable on their flat surface. I put octal socket risers in the power tube positions so you can change power tubes by gripping them at the base rather than pulling on the glass. Original shipping materials. The tube cages and tubes will be shipped in a 2nd carton.