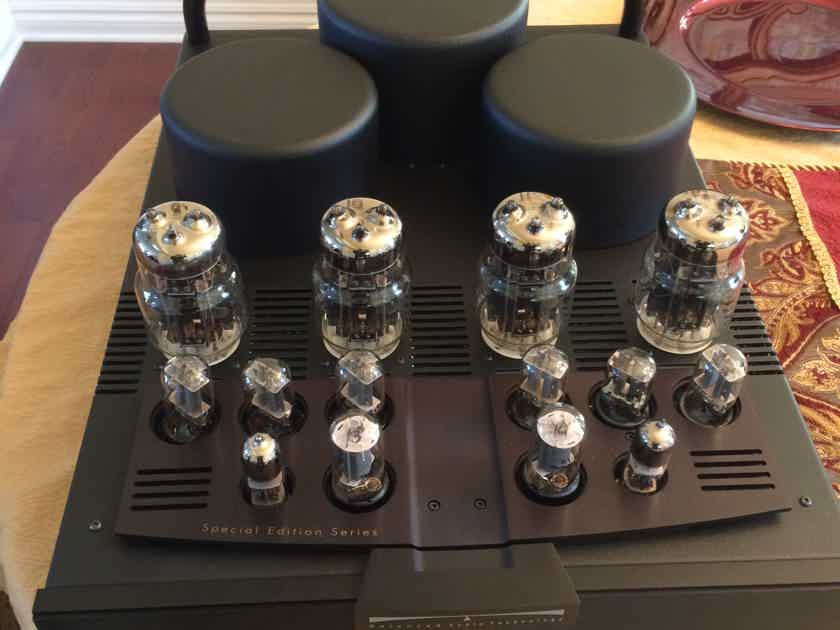 This is a stunning sounding and looking amp. It was made in July of 2007 and has served me well. In February of 2015, the chassis was damaged during a home-to-home move. The chassis and transfor...2501.00 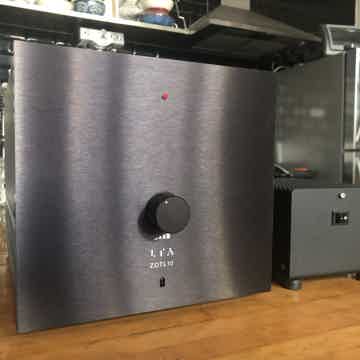 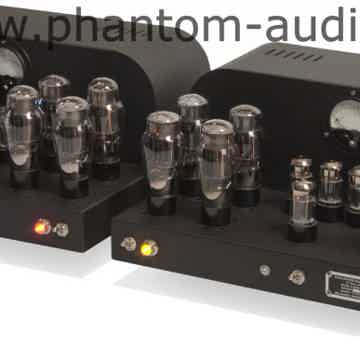 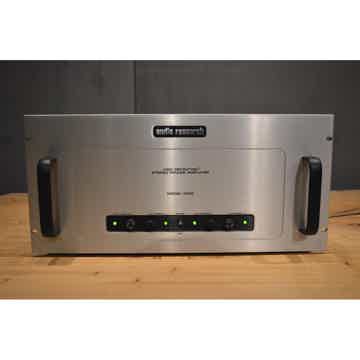 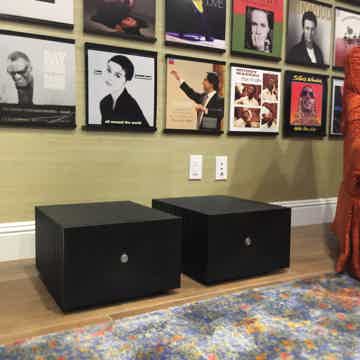 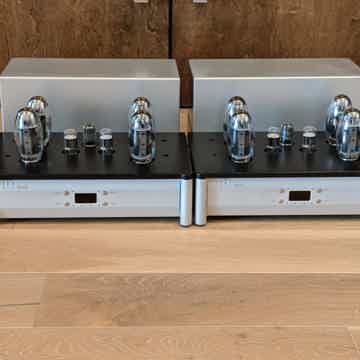 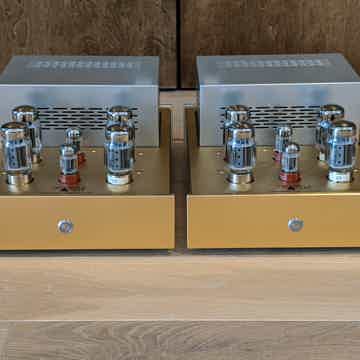 no longer for sale
This is a stunning sounding and looking amp.  It was made in July of 2007 and has served me well.  In February of 2015, the chassis was damaged during a home-to-home move.  The chassis and transformers have been repainted and the unit carefully reassembled.  It was shipped to BAT for a full checkup.  It is near perfect and tubes are all strong  A complete second set of tubes was purchased in March of '17 and have less than 1000 hours on them.  I will drive up to four hours one way from 48178 to meet or deliver.  See review below:

Balanced Audio Technology (BAT) is renowned for the quality of their preamplifiers (VK-5i) and power amplifiers (VK-500), and they just seem to get better and better. Their VK-60 has been an amplifier "to die for". The VK-75 is the replacement for the VK-60. It has more power than the VK-60 (75 watts per channel instead of 60). The VK-75SE (SE means Special Edition) utilizes the new 6H30 tube that BAT's designer, Victor Khomenko, is extremely proud of. The 6H30 tube is Russian in origin, and was part of their secret nuclear arms program. It was obviously not allowed out of the country, until the Soviet Union became Russia and a democracy. You might wonder why the heck would anyone use tubes in such critical electronics when you could use transistors. Well, it turns out that tubes are not as subject to the electromagnetic problems that occur when a nuclear weapon is detonated. Transistors are much more sensitive to this.

OK, enough about the paranoia of the past. Let's move on to a much more useful and enjoyable place for the 6H30 tube. It is a dual triode and was designed to run very hot . . . about 500 degrees Fahrenheit. BAT runs the 6H30 much cooler, but it still has more output than the 6SN7 dual triode that it replaced. However, it has so much output, that only one is needed for each channel. So, the VK-75SE still has three 6SN7s and the one 6H30, per channel. The 6SN7s serve as the input stage, the 6H30 as the driver stage, and the 6C33s as the output stage. The 6H30 is very demanding of current, so a dedicated 6V6 supplies that current in each channel. In the photo below, which is a close-up of the tube area, you can see the 6C33 power tubes in the rear, 6SN7s in the middle row, and in the front row, a 6H30 (the smallest tube) next to a 6V6 (the glass envelope looks dark).

The VK-75SE's power supply stores 700 Joules of energy. That is a big number for 75 watts per channel, but that is what it takes for a top notch amplifier. The output is in Class A to 64 watts (each channel). This is another reason for having a big power supply, because the high Class A output means the amplifier is dissipating about 250 watts of heat (each channel) at idle.

The rear panel of the 75 (photo below) has gold-plated binding posts for 8 Ohm loads and also for 4 Ohm loads. This is possible because the 75, and other tube amplifiers in general, use output transformers. There is a secondary winding for 8 Ohms and one for 4 Ohms. Balanced XLR input jacks are in the center (no unbalanced RCA input jacks), and the grounded AC power socket, as well as the toggle on/off switch are on the right.

The fact that the tubes are dual triodes comes in very handy. The VK-75SE is fully balanced, meaning that the signal path does not touch ground. There are three conductors. The two conductors that carry the signal are mirror images of each other (signal 1 and signal 3 in the diagram, shown below), and are referenced against each other. The benefit of this is that noise spikes in the signals (little peaks in signal 1 and signal 2) are not mirror images. When the two signals are combined (one is first inverted), the noise spikes cancel out, and you end up with a much cleaner sound. So, for the 75, one triode in each tube is used for signal 1 and the other triode is used for signal 3. Because the two triodes in each tube are under exactly the same vacuum, this helps to keep the way the two triodes handle the signal the same.

It is like having two amplifiers in each channel, and in fact, the technique is similar to bridging a two-channel amplifier where you then use the two red speaker binding posts of the two original channels, for the speaker connection, rather than a red and a black binding post of one channel.

The VK-5i is one of the best tube preamplifiers ever designed, and although the new VK-50SE might be a more appropriate partner to the 75 (both use the 6H30 tube), the 5i and 75 are still a spectacular combination. Sometimes, tubes can have a slightly laid back upper end, and actually, many consumers like that, but the 75 has all the detail and sizzle of any solid state amplifier I have ever heard. More importantly, it has none of the odd order harmonics that mar the sound when you crank up some transistor amplifiers. In fact, I have never heard this kind of detail from a tube amplifier. The 6H30 tube is probably the core reason for this, although there are other changes in the VK-75SE compared to the VK-60 too.

Most of my listening is to classical music, primarily Baroque chamber music. This kind of music has violin, viola, cello, flute, harpsichord, trumpets, etc. Obviously, any hi-fi equipment will play this music, or any other music for that matter, but what differentiates high performance equipment from the mass market stuff is the ability to resolve the details. Because the VK-75SE reproduces the details so well, the instruments have more depth to them. Even from across the room, there is a sense of reality that the average product simply cannot give. My collection of Bach, Vivaldi, Handel, Purcell, and others, glows like never before.

Triode tube amplifiers tend not to use negative feedback, and this results in a higher total amount of distortion, say 1%, instead of 0.1%. So, some consumers will tend to think that tubes are less accurate than the solid state products. Well, I won't get into the argument of accuracy, but I will say that what is important, is the TYPE of distortion, rather than the absolute amount, and this is what tubophiles love. There are other reasons to like tubes in your hi-fi. Tubes were invented at a time when designing an audio amplifier was considered a high tech project. So, many of the new tubes were designed with audio in mind. Transistors, on the other hand, came about when the space age was emerging, so the electronics industry in general was the priority, not hi-fi. Actually, transistors were optimized as switchers, to replace tubes. Switchers are great in computers, but audio switching amplifiers (Class D) that handle the entire audible range well are just now beginning to work, and still not perfected. (They make great subwoofer amplifiers though, handling just the low frequencies.) Lastly, tubes often have hundreds of volts on the plate, compared to much, much less voltage for a transistor, and this makes it easy for tubes to really deliver the goods.

This is not to say that solid state amplifiers don't measure up. There are some wonderful transistor preamplifiers and power amplifiers out there. BAT's own VK-500 is one of them. (I have a VK-500 and love it.) But the VK-500 does not use negative feedback either, and this requires extra investment in the design. Such a design will keep the total distortion as low as possible, but without adding higher-ordered harmonics.  It has an enormous power supply and only two gain stages. It is very large, very heavy, and very expensive, but that is what it takes for a top-notch product. The VK-75SE is large and heavy too, with only 75 watts per channel output. It is also quite expensive, but the music is glorious. Even when I just had it playing some Bach softly in the background, the sound made me stop reading my newspaper and listen. Is it worth $8,500 for background music? Well, what price do you put on musical pleasure?