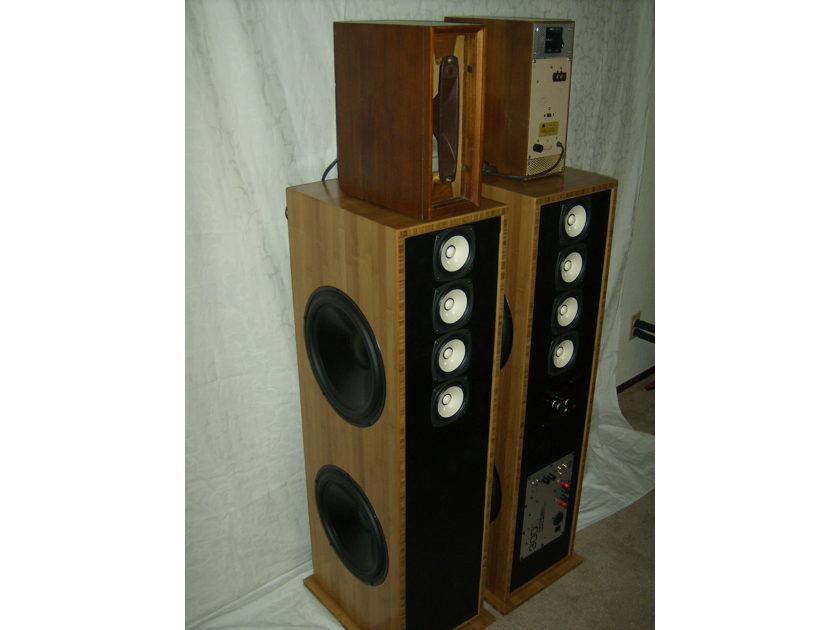 Brand new Vaughn Plasma II speakers similar to what was shown at RMAF 2015. These come with both rebuilt Dukane DUK10 Plasma tweeters and the Fostex horn tweeters. These are 97 db efficient and 8 o...9995.00 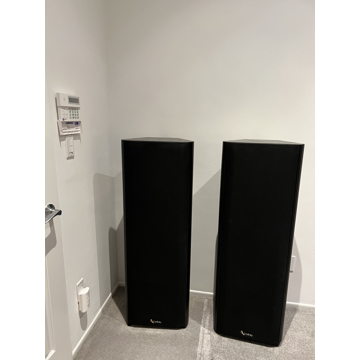 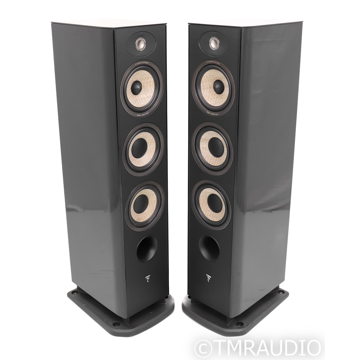 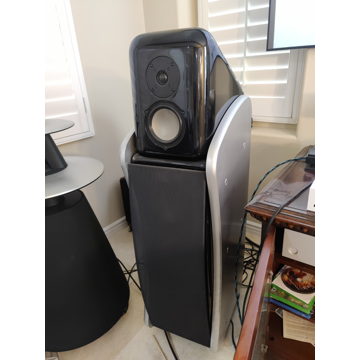 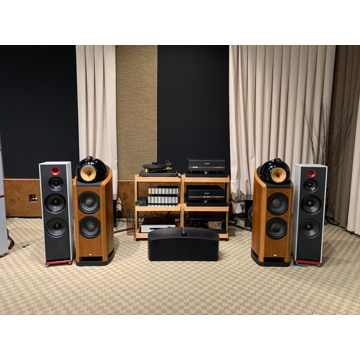 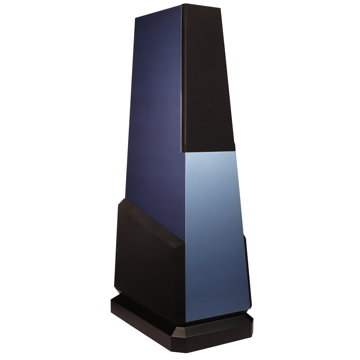 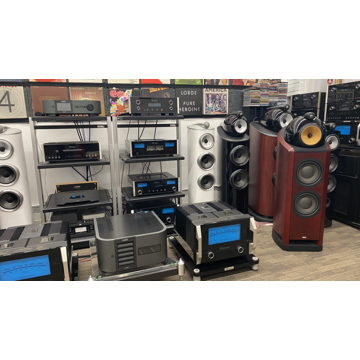 Brand new Vaughn Plasma II speakers similar to what was shown at RMAF 2015. These come with both rebuilt Dukane DUK10 Plasma tweeters and the Fostex horn tweeters. These are 97 db efficient and 8 ohms so super easy to drive with almost any amplifier, we showed with 8 watt 300B amplifiers with fantastic results. See the Vaughn Loudspeakers web site for specifications and more information on these amazing speakers. Speakers feature eight 4 inch drivers, four facing forward and four facing to the rear for true bipolar response and equal to the cone size of a 12 bass driver so they will move way more air than even large panel speakers. The bi polar array creates a large realistic soundstage that has been the sole province of large planar speakers and all in a super easy to drive speaker. The eight 4" drivers cover the range of 80 hz - 7000hz so no crossover in the the critical midrange. The bass is then handled by a 12" powered woofer and 12" passive radiator that is adjustable in both crossover frequency and volume so it can be mated to any room or room position.

This is all topped off with the incomparable rebuilt Dukane Duk 10 plasma tweeter for the best high frequencies ever. The speakers also come with the Fostex horn tweeter or are available for $3000.00 less with just the horn tweeter or for $3000.00 more for our completely new plasma power supplies and rebuilt horn sections and bamboo cabinets.

Here is a show review of the Plasma II from the Rocky Mountain Audio Festival followed by a testimonial form a customer.

Thom Mackris (http://galibierdesign.com) and I wandered into the small Vaughn Loudspeakers/Wavelength room almost by accident. I saw the Ionovac tweeters from the hallway and stopped dead in my tracks. I've been in audio since the Sixties and had only seen them in pictures, and now there was a room with a working pair, on demo! I've never forgotten how the Hill Plasmatronics sounded at the 1979 CES (and was quite disappointed by the new-generation German ionic tweeters). The sound. The only point of comparison was the Plasmatronics, which, like the Vaughn/Ionovac, had unlimited HF dynamics and extension. This is more unusual than it sounds. Usually you get one or the other. If you want extension, look at low-mass diaphragms like the very thin aluminum of freely-suspended ribbons, or the Mylar of electrostats. Both do extension, shimmering beauty, and a wide-open sound really well; they're the usual top-of-the-pile solution for advanced loudspeakers (and this has been true since the Fifties).

If you want power and impact, you have to look elsewhere. Notoriously, compression drivers and horns. Traditionally, these have had rough frequency response, poor impulse response, but stupendous, real-life impact and dynamics, as well as vivid tone colors. Modern diaphragms, phase plugs, and low-diffraction horns have changed this picture while retaining the dynamics and tone colors. But they're still not at the DC-to-light qualities of traditional "exotics" like ribbons or electrostats.

The Hill Plasmatronic was the one exception, and very few people have ever heard (or owned) them. There was the minor issue of recharging the helium tank every few months, and the paper-cone mid and bass drivers, to be honest, were left behind by the UFO performance of the tweeter. Imagine a 1956 Corvette powered by a Tesla powertrain and you get the idea. Interesting but not the full solution.

But I've not forgotten what it sounded like. No limits. No diaphragm sound at all. No compression, no breakup, no coloration, no shrillness, and the ability to start and stop faster than the limits of perception. Bandwidth set by the microphone, not the loudspeaker.

The Plasmatronic was the only time I've heard the realistic sound of metal-on-metal percussion, which is usually dulled, softened, coarsened, or completely broken up by conventional diaphragms. The combination of IM distortion and resonant stored energy results in a type of modulation noise that can be subtle to annoying. With no diaphragm, there's no stored energy. Just ionized gas. As you might imagine, the inertia of a charged gas, compared to aluminum, silk, plastic, or the latest techno-wonder material, is close to zero.

The Ionovac sounds like that. But there are so few! So rare! And what about ozone? Reliability? Parts? And so on?

The most surprising thing, aside from the astonishing sound and out-of-this-world technology, was finding out the pair on demo were new production tweeters, the first since the late Fifties or early Sixties, when the Ionovacs went out of production. This was like finding a Chrysler turbine car, not just in pristine condition, but in perfect working order, and new production with more in the pipeline!

Problems? The notoriously hard-to-find crystals, at the heart of the Ionovac, have been replaced by new-production crystals sourced in the USA. All the rest is new as well. It's basically a small AM transmitter that delivers power into the crystal, and that in turn ionizes and modulates the air in the small inner chamber. The volume of the ionized air changes by a tiny amount, and the horn amplifies it and directs the sound to the listener. Unlike some other ion tweeters, it doesn't fill the room with ozone, and no monthly helium tank is required.

I don't usually approve of diffraction horns (see picture above), because, well, diffraction, and diffraction is a Bad Thing that creates reflections, ripples in the time and frequency domain, etc. etc. But … this is a special case. See, no phase plug. No diaphragm. The usual issue with diffraction at the horn mouth is a back-and-forth reflection between the horn-mouth and the hard surface of the phase plug (and diaphragm). That's where a lot of horn coloration comes from, since the ear is very sensitive to a series of reflections. Not only that, the Ionovac diffaction horn is pretty compact, so the Bad Thing happens once, not many times, and is close in time (a fraction of a millisecond) to the main impulse. Subjectively, there's no horn sound at all, and the diffraction horn works as designed, giving very wide horizontal dispersion (I'd guess 120 degrees or wider, from what I heard in the room).

The rest of the speaker, and the top-of-the-line Wavelength electronics and DAC, had nothing to apologize for. From my perspective as press drudge working the show, it was a mistake going to the Vaughn/Wavelength room first. It took a half-hour of chit-chat in the hallways, with all the rooms booming away at once, to tolerate the sound of ordinary loudspeakers again.

But that's partly me as a loudspeaker designer. I can really hear the sound of materials, and I can tell you ionized air sounds a lot better than anything else. Why the German ion tweeters miss the mark, I have no idea. But they don't sound like the Plasmatronics (unobtanium) or the Ionovac, back on the market after all these years.

Of course, after making my Thrilling Discovery that shakes up the industry, more than one reviewer at the show mentioned that I was a couple of years late. They were there last year, dummy. You just didn't see them.

Better late than never, I guess. But I still think a new-production Ionovac is a big deal, particularly now that the curse of the Compact Disc 20 kHz brickwall limit is finally lifting, thanks to the rebirth of modern LP's and high-res PCM and DSD downloads. Everything old is new again.

Hi Jim. I felt like it is time to give you some feedback on the Plasma II speakers that I bought from you. As you know, I purchased the vintage plasma tweeters that you rebuilt. These are by far, the finest tweeters I have ever heard. I have been into audio for a few decades and have tried many, many speakers.The plasma tweeters mesh very well with the line array drivers and also the powered woofer that is in each speaker.The line array presents a very large and realistic sound stage. The tonal qualities are spot on..My wife is a professional piano player and she feels these speakers reproduce piano better that any we have had. The tweeters fill the room with non-fatiguing highs, that are never grainy or etched. Overall, as you can tell, I am very,very pleased with these speakers. Thank you for such a fantastic product!!! Dan February 10, 2016