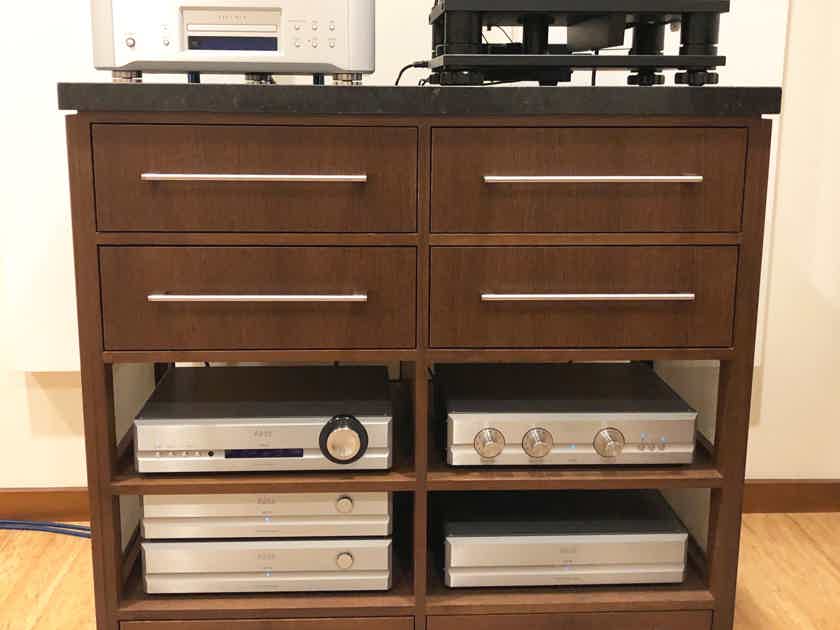 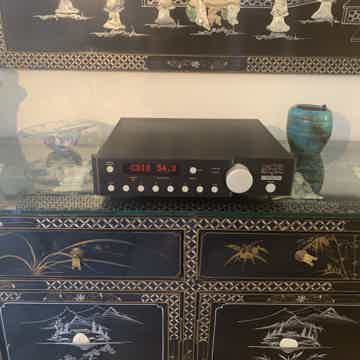 Mark Levinson No. 380S (Near Pristine) 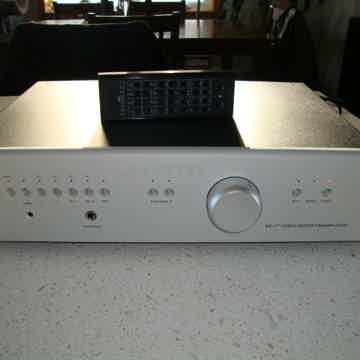 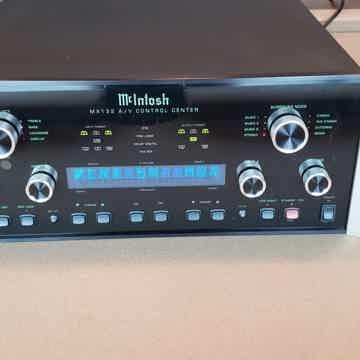 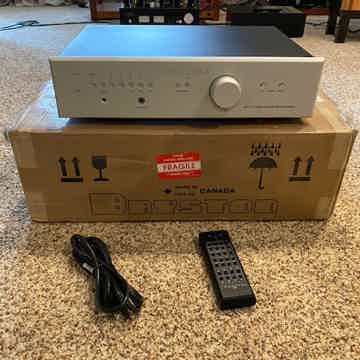 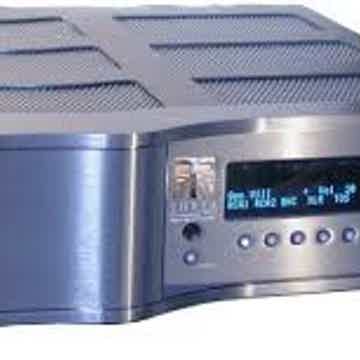 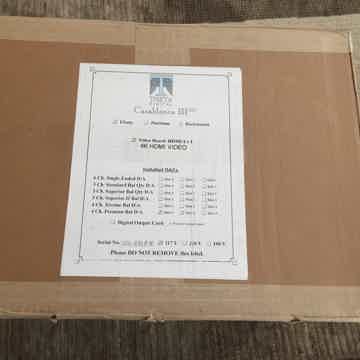 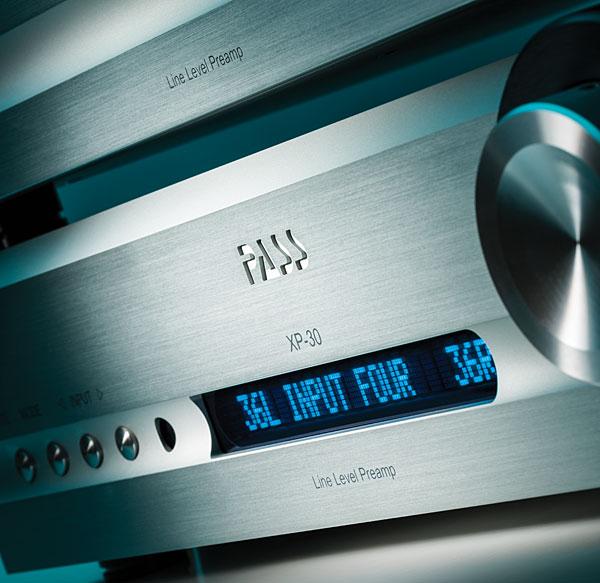 One owner non smoker and as new ready for your enjoyment.

It is best to call for more information.

No low offers considered and the right buyer will appreciate this as new reference line stage.

The XP-30 is a three-piece modular preamplifier consisting of one control/power supply chassis and two additional gain chassis each containing analog signals of a single channel. The XP-30 generates less noise, crosstalk and distortion while delivering greater dynamic range, gain, output voltage and output current. But it is the sound, not the technical excellence, that truly makes this a breakthrough instrument.
Stereophile Rave Review states: https://www.stereophile.com/content/pass-laboratories-xp-30-line-preamplifier-page-2

Sound quality:
I was alarmed when I first set up the XP-30: I could get no sound out of it. After much troubleshooting, including rebooting the preamp several times, it turned out that the problem was the AudioQuest Wild Blue balanced interconnects I was using between the dCS Debussy DAC, the XP-30, and the Classé CTM-600 monoblocks. I replaced these cables with the Cardas-sourced Ayre balanced interconnects I'd borrowed to use for my review of Ayre's K-5xeMP preamp, and music burst forth from the speakers.

I informed Pass Labs of a possible incompatibility between the XP-30 and the AudioQuest cables; they obtained some samples from AQ and found that everything worked properly. I put the problem down to my usual bad kable karma and sat down to some critical listening. I put on a CD Stephen Mejias had given me as a Christmas present: Hildur Guðnadóttir's Leyfðu Ljósinu (Touch TO:90). Recorded live, primarily with a Soundfield microphone, the album begins quietly with cello and voice, but develops into enveloping soundscapes of vocal textures over a looped motif based on a major second interval. I had meant to listen for only a few minutes, to ensure that all was working correctly, but before I'd realized it, the 40-minute CD had played all the way through. 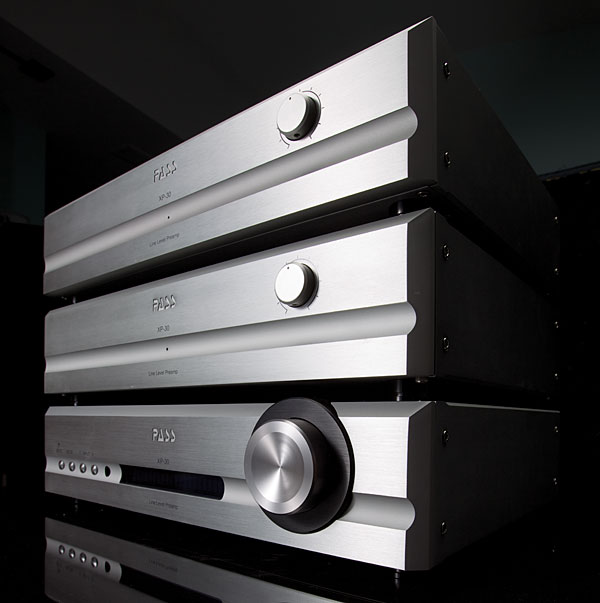 Hmmm. The sonic characters of the preamplifiers I have enjoyed using over the past decade or so range from the airy if light-balanced Parasound Halo JC 2 to the dark-toned Mark Levinson No.380S. The Nagra Jazz, reviewed elsewhere in this issue, lies closer to the Parasound in its sonic signature but approaches the Levinson in its ability to throw a billowing soundstage. The Simaudio Moon Evolution P-8, Audio Research Reference 3, Ayre Acoustics KX-R, and, to a lesser degree, Ayre's K-5xeMP, are all soundstaging champs, but excel at reproducing, along with the soundstage, the palpability of individual acoustic images. The ARC and the Ayre K-5xeMP push the image forward a little, the Simaudio and the Ayre KX-R present a deeper, more resolved soundstage. But of all these preamps, it was the Ayre KX-R and Moon P-8 that for me most effectively communicated the music—as the Pass Labs XP-30 was now doing.

The weekend I had installed the XP-30 in my system, I had ripped a favorite organ recording, Philip Ledger's Organ Music from King's (EMI HQS-1356), to 24-bit/192kHz AIFF files using Ayre's QA-9 A/D converter. Listening to Vaughan Williams's serene prelude based on the Welsh hymn tune "Rhosymedre" with the XP-30 feeding Lamm's M1.2 Reference monoblocks, I was struck by how well delineated were the spatial effects on this recording. Ledger repeats the tune on different stops of the King's College Chapel organ; the ranks of pipes represented by these stops are in different parts of the sanctuary and all of their position were unambiguously presented by the XP-30. And the lowest-frequency pedal notes had impressive weight and authority.

As I was writing this review, I picked up a hard drive from Systems Two Studio in Brooklyn containing engineer Mike Marciano's final 24/88.2 mixes of Sasha Matson's jazz opera Cooperstown, which I had produced. As I listened to these files, the XP-30–centered system became a time machine! I was transported back to last September and Bill Schnee's studio, in North Hollywood, where we'd recorded the voices. Our canaries—sopranos Julie Adams and Carin Gilfry, tenors Daniel Montenegro and Daniel Favela, bass Rod Gilfry—materialized in my room. Their voices had been recorded dry, but each was convincingly enveloped in just the right amount of supportive ambience, which Mike had supplied with a Pro Tools reverb plugin set to "Concertgebouw."

Time machine? The phrase sounded familiar. And there it was in the XP-30's owner's manual: "The XP-30 is a time machine, offering a greater 'look-back' at the original musical performance and conveying additional insight [into] the artist's creative intent."

Yes indeed. Back in the 1970s, I fell in love with the recordings coming from Philadelphia's Sigma Sound Studios, particular of the Stylistics. Some of this vocal group's songs descended into mawkishness, but one, the Thom Bell–produced and –written "You Make Me Feel Brand New," from 1973, shone back then like a finely crafted gem.

It still does. I put the Stylistics' Rockin' Roll Baby LP (Avco) on the Linn, with the Liberty phono preamp feeding the XP-30. It all came back to me. The intro features a Coral electric sitar intoning a melodic fragment from the song's chorus over a backing from acoustic piano and Fender Rhodes. This is standard practice from The Professional Arranger's Handbook, but is none the worse for that, the attractive hook leading to a stately dotted rhythm in E major, sustained by lusciously slow stereo vibrato on the Rhodes piano. E has always been a dark key for rock music, but even as the verse showcases Airrion Love's baritone, hints of tonal schizophrenia creep in with the inclusion of a C natural in the melodic line, and within 10 measures, the song changes gear and modulates up to G.

Straight A1/A2 form so far, but then a B minor coda is tacked on to the verse, with the eerie tenor of Russell Thompkins Jr., doubled on sitar, leading the way to the chorus. We're still in G, but the first chord here is a C major 7, and it isn't until the end of the chorus that we resolve on a G major chord, the song apparently pretending it's in E minor most of the way. Even then, though G is now firmly established as "home," this isn't for long, as the melodic fragment used for the intro pivots on the note B—the median of G major, the dominant of E major, and also the added note in the honey-sweet C major 7 chord—to lift us up to E major for the start of the next verse. As with M.C. Escher's waterfall lithograph, we've changed harmonic gear twice, both times in an upward direction, yet we're back where we started, in E major, and ready to go up again.

Add to this repeated intensification of emotional tension Thom Bell's sympathetic use of strings and "flavoring" instruments like the vibes, which lead into the second verse to underline the unusual vocal scoring, where Thompkins's high tenor allows the harmonies to support the melody from beneath rather than surround it from above, and it perhaps becomes more clear why this deceptively simple song sounds just as gripping nearly four decades after I was first captivated by it.

Hmm. I am supposed to be writing about sound. Instead, I've just devoted three paragraphs to musical analysis. This is typical of what kept happening during my time with the XP-30: I'd focus on the sonic aspects of what I was hearing, but end up thinking about aspects of the music.

Again from the XP-30's manual: "The XP-30 will help you rediscover the joy of your record collection." Indeed it did!

Summing up :
Ayre's KX-R and Pass Laboratories' XP-30 represent the opposite ends of the spectrum of preamplifier design. The Ayre has zero negative feedback, even in its power supply, and mechanically coupled potentiometers for volume control; the Pass uses negative feedback both in its audio circuit and in its many three-pin voltage-regulator chips, and has an integrated-circuit volume control. It's been four years since I had the Ayre KX-R in my system, and yes, auditory memory is notoriously fickle. But my auditioning convinces me that Pass Labs' XP-30 equals the sound quality of the Ayre. The XP-30 has rekindled for me the concept that the beating heart of an audio system is the preamplifier. This is one you need to hear for yourself.

Weinhart Design has lots of other items new and used and if you're in Los
Angeles or visiting please accept my invitation to experience our World
Class Audio Showroom and please visit our web site @
www.weinhartdesign.com

We are always interested in purchasing quality Audio and Video items, LP collections and most quality trades are welcomed.

All sales out of California are State Sales Tax exempt.

California State Sales Tax of 9.5% applies for items picked up or shipped to a California address.

We accept payments by Bank Wire Transfers without fees and is the only
form of payment on all sales out of the U.S. and Canada. We prefer this
method of payment and also makes shipping to addresses other than
billing agreeable.

VISA, MC and Papal are gladly accepted within the U.S. and Canada as long as the charge is approved and shipping to the billing address on record and adds 3% to cover costs.

Please call me directly in my world class showroom in Los Angeles weekdays @
310-472-8880 or any reasonable time on my cell including weekends @
310-927-2260 and I can answer your questions and help you with all of
your new and pre owned needs.

Changing the Way You Listen,