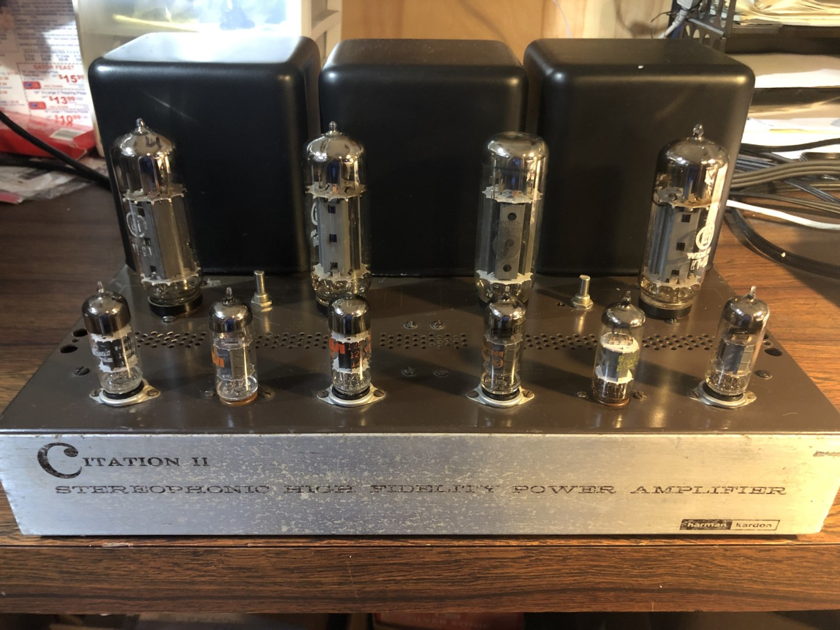 This listing is for a Harman Kardon Citation II tube power amp that has been reconditioned by an electronics engineer with a PHD from FSU and astronaut. Prefer not to mention people’s names but ...1900.00 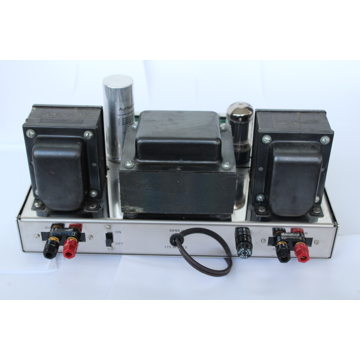 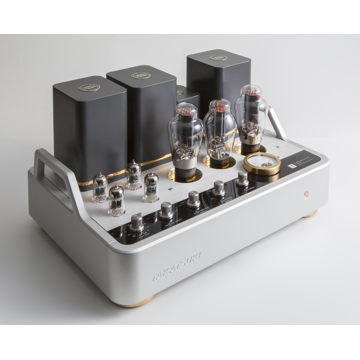 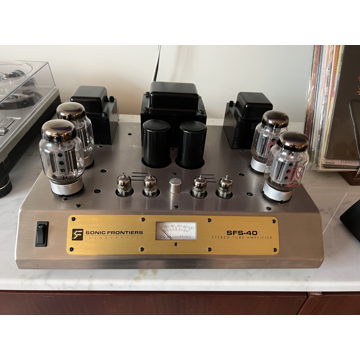 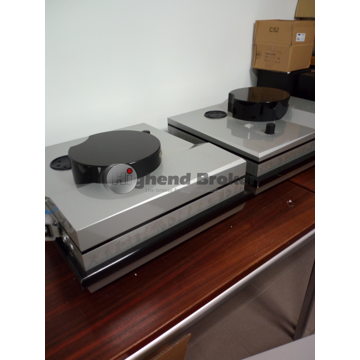 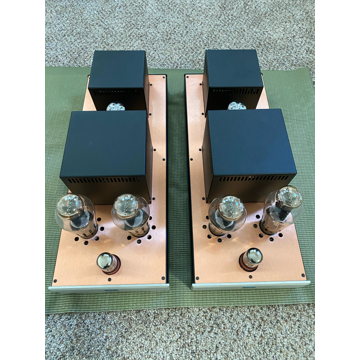 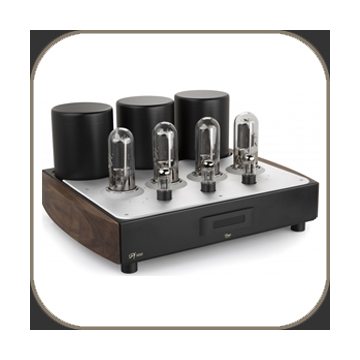 "All have modern filter capacitors of higher value and better quality than the original 50’s/60’s caps used by Harmon Kardon. All bias power supplies were converted from ’half-wave rectification using a single selenium rectifier to full-wave rectification using silicon bridge rectifiers and larger capacitance in the supplies’ filter caps. All have negative temperature coefficient thermistors that lower the current surge at power-on to provide "soft" turn-on.

The bias meters’ series resistors on all twelve of the amps have been changed so that the meter’s bias mark represents only 67 mA. of output tube plate current rather than the 100 mA. that Harmon Kardon used. At 450 volts on the KT-88 or 6550 plates, 0.1 amp means 45 watts tube plate power dissipation. This was not a good idea since 6550s were rated at 30 or 35 watts and KT-88s at 40 watts. So, Harmon Kardon operated the Citation II output tubes well in excess of their manufacturers’ plate power ratings, significantly lowering their operating life time. At 67 mA., my amps’ output tubes dissipate only 30 watts, which does not exceed the rating of a 6550 and is comfortably below the 40 watt rating of a KT-99 and even more so for the 45-watt rated KT-90 power tube.

Every channel of every amplifier delivers at least 62 watts into 16-ohm resistive loads at 0.5% THD if the line voltage is held at 120VAC, which I did with a 2kW Variac. Load resistance of 16 ohms was used because that is the output tap used in the four-amp configuration to produce over 500 watts/channel (Imagine two such configurations, each capable of 500 watts @ 0.5% THD driving a pair of B&W 802Ds, which is what they do in our A/V room). Most single amp channels produced over 70 watts under the same conditions. It is my belief that every channel would have made or beaten the 70-watt figure if I had new vacuum tubes, but most of my tubes have at least four or five years of use. This is somewhat hazardous in that the output tubes can get gassy as they age and subsequently begin to "run away." The plate current in this circumstance can get high enough to damage the output transformer, an event that I have personally witnessed twice. A couple of months ago, I paid over $700.00 to an eBay vendor for a pair of Citation II output transformers and had previously had one damaged transformer rewound 15 years ago at a cost greater than that.

Since I rebuilt all of my Citation II’s with modern power supply filter capacitors of larger capacitance, at least 70 watts/channel @0.5% THD was realized on these amps.  That handily beat Harmon Kardon’s rating of 60 WPC @ 0.5%, a strong selling point.

My personal recommendation is to leave the output tube bias at 30 watts, since that it within even the 6550’s maximum plate rating.  It was never a good idea to run either the 655o’s or the KT-88’s at 45 watts since that power dissipation level exceeds those tubes maximum rating of 30 and 35 watts, respectively.

A further argument to leave my mod in is that Jim McShane, who for years was well known for offering advice and circuit mod kits for the Citation II, also recommended reducing output tube bias to a level within the output tubes ratings.  Jim, however, did it in a less satisfactory way.  He effected the reduction by increasing the KT-90 cathode resistors from 15 ohms to a higher value.  Since the voltage across this resistor sets the bias meter level, it does work, but it also changes the cathode degeneration, that is, the element of negative feedback for the KT-90.  My method only affects the meter reading, it does not alter the actual circuit parameters."

Below was written by Bob Carver

The Citation II was Stu Hegeman’s penultimate masterpiece, inspired by his unwavering desire to build a power amplifier equal to his stunningly great Citation I preamplifier. I consider the Citation II power amplifier to be one of the most original designs in audio history, introducing technology that had never before been seen in an audio product. The Citation II’s high-gain, wide-bandwidth video-pentode design yielded performance that was difficult to believe.

Stu Hegeman’s circuits produced a sound that had a life and a breadth and image depth that were stunning. They were the ultimate in soundstaging and sense of immersion. The Citation II’s circuit was most elaborate, the thinking behind it exceptionally advanced, the sound spectacular! It consisted of a pentode input stage, followed by a pair of 12BY7 video pentodes as a differential phase splitter (the video pentode supplied a bandwidth of well over a megahertz in the input stage). The video pentodes drove the grids of the output tubes to full power. This had never been done before, and it resulted in a wide power response that was second to none. The output stage utilized a pair of KT88s for each channel, each valve having its own bias control as well as an AC balance control. (A small meter at the chassis rear measured bias and AC balance.)

Three feedback loops provided 32dB of overall feedback with unconditional stability. The output transformers were superb, built by the Freed company in New York. Huge, well-potted units, they boasted extremely wide response thanks to the ultra-low leakage inductance. Only the highest-grade core materials were used, which lowered the effect of core distortion to a region well below the limit of human hearing. With feedback, the Citation II transformers were capable of high-frequency response up to 270kHz, a response that most designers of the time thought could not be achieved.

This 70 pound amp is quite a feat of engineering. It’s impressive weight and construction is equally matched by the impressive looking line of tubes, and the conservative 60 WPC power rating. But the really impressive work is "under the hood". Hegeman felt that a good amplifier should not be bandwidth limited to the audible range, but should extend farther in both extremes, so the amplifier can handle the audible range without any of the artifacts of limited bandwidth amplifiers; such as phase shift at the frequency extremes.

This amplifier consists of a pentode input stage, followed by a pair of pentodes as a differential phase splitter. The pentodes Hegeman chose were 12BY7 video pentodes. This choice of tube gives the input stage a bandwidth of well over a megahertz. The output tubes are a pair of KT88’s per channel. There is a individual bias controls for each output tube as well as an AC balance control. There is a meter on the back of the amp to measure bias and AC balance. AC balance requires a set of 25 Watt 16 ohm dummy loads be substituted for the speakers. A test signal output RCA jack is supplied on the back of the amplifier. The test signal is fed into each channel and the AC balance pot is adjusted until the meter reads a null.

The output tubes drive a potted transformer which is arguably the best ever built. It was wound by Freed in New York. It has a full power bandwidth of up to about 230 HKz. These transformers look like iron, but sound like gold. They are also scrounged by Bruce Moore for use in his MFA amplifiers. I’m sorry to say that many a Citation II has been gutted for it’s iron.

There are three nested feedback loops. The first is from the plates of the phase splitter tubes, to their grids. The second is from the plates of the output tubes to the grids of the phase splitter tubes. The third is from the output transformer secondary to the cathode of the input tube. The total amount of feedback is about 32 dB. This about 10 dB more feedback than a traditional Mullard or Williamson type tube amp. The multiple loops, and fantastic output iron make this possible. The time constants of each loop have been carefully calculated. 10 KHZ square waves (at about 2/3 power) look amazingly good, with just a tiny hint of ringing (one period). This amplifier is amazingly stable for any tube amplifier, let alone a tube amp with that much feedback.

When the passive components in this amp are updated, this amp sounds just amazing. It produces music with an authority and an ease that is unequaled in the audio world. It tends to have a dry and "correct" sound rather than a "tube amp" sound. If you want the warmth and carmel sound of vintage tubes, this may not be the amplifier for you. If you want your music served up honestly with a bare minimum of distortion (and no solid state distortion), this may be the amp for you.

Offered for $1900 plus $100 domestic shipping. Guaranteed to play correctly and be as described. Always over-packed and insured.

Due to items lost or damaged in shipping, any item over $50.00 in

cost will require delivery confirmation and insurance for the sale

amount. It is unfortunate that this is necessary but experience has

proven it is well worth the small extra cost. We apologize for this, but

it is for the good of all involved.

All listings are plus shipping unless noted. 7.00% sales tax added

to all In-state destinations. This unit is guaranteed to be in "as

described" working condition (unless otherwise noted) upon arrival and

has a 60 day limited warranty, baring any abuse. 15% restocking fee on

all returns unless defective or "not as described"

We ship internationally on smaller items . Domestic packages are

shipped via Fed Ex. All international shipping quotes will include

cost of shipping, plus a nominal fee for packaging materials.

International shipments to countries that do not allow insurance,

buyer assumes FULL RESPONSIBILITY for the safe shipment of their

packages shipped without shipping insurance. All shipping quotes for

purchase price, not including shipping, unless otherwise stated in the

ad. It must arrive back at our store in the same condition as

sent. 15% restocking fee on new items that were opened.

international purchases need to be returned with incoming custom’s

duty prepaid, if any. Any postage or import duty that is due upon

arrival will be deducted from the refund. 15% restocking fee also on all

returns unless defective or "not as described."

Thank-you for your time and interest!!