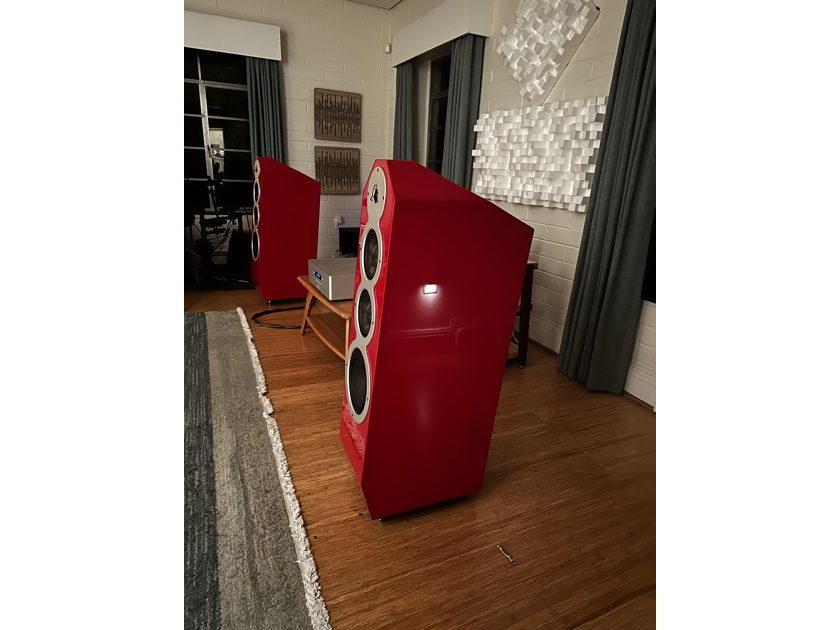 EgglestonWorks the 9se. Handbuilt in the US. Gorgeous speakers with all new wiring, crossover, and respray at EgglestonWorks in March of 2022. Full, engaging sound with incredible midrange, full...6149.00

Nearfield Pipedreams 15 (75% OFF) with subs and xover

EgglestonWorks the 9se.  Handbuilt in the US.  Gorgeous speakers with all new wiring, crossover, and respray at EgglestonWorks in March of 2022.  Full, engaging sound with incredible midrange, full range smoothness, and detail without harshness. Soundstage/imaging incredible. Truly reference speakers. Average price on Audiobluebook is $9.800.

While EggstonWorks are beloved in some circles, they are relatively rare.  Here are a couple of links, first Eggleston's website.  Note the incredible build quality.  The second is a Viginti review from which the updated crossover is based.

Have all boxes and packing, including the felt bag in which they are initially wrapped.

Local pickup only.  I am equidistant between DC and Richmond, 1 mile off 95.  They are heavy and large  - bring a friend.  I spoke with Jim Thompson about these.  He reported the drivers are perfect, and...

The crossover in his speakers was the original version and so we brought it up to final iteration before we discontinued the model.  Also, we were unclear if any previous owner had done any mods to the crossover.  In any case, it is our opinion that the crossover we installed recently is the best fit for the Nine in any setting.

That pair was orig made in Jan 2015.  However in March of this year is when we did the refurb which included wiring, crossover, and a complete re-spray. So the drivers and the cabinet are the parts from 2015.  Everything else is new.

There is rarely anything wrong with drivers when we get a pair back for some work.  The drivers will last 15 – 20 years (or more if housed properly and taken care of).

The Nine Signature SE occupies a special place among other EgglestonWorks speakers. The original Nine was named Product of the Year in two different publications. Its price point, size and performance added up to what is considered a complete speaker.

With great consideration, the Nine Signature seeks to improve upon an already great speaker. To accomplish this goal, the EgglestonWorks design team opted for an overhaul of the original Nine in many ways, but still maintained the essence of what made it such a great speaker. That essence was and is the speaker’s ability to convey the emotion of music.

The combination of re-evaluation and re-invention once again has proven to be a successful method for loudspeaker design. In the Nine Signature SE, inspiration may have come from many sources but the goal was singular: to continue our tradition of quality products.

The latest advancements to the EgglestonWorks line are being recognized with the implementation of the “Special Edition” mark or “SE”. The SE moniker is being applied line-wide as a suite of upgrades aimed at improving additional performance and aesthetics.

Initially, the SE mark was developed to draw attention to EgglestonWorks’ new paint finishing system, which greatly improves the outward appearance of the speakers. These finish improvements were joined by enhanced crossover components, internal wiring, and binding post upgrades.

These seemingly small changes contribute greatly to already impressive performance as well as fit and finish. EgglestonWorks proudly presents the Nine Signature Special Edition as the latest in a long tradition of the highest quality loudspeakers.

Paypal FF or Venmo.  You can send after seeing speakers if you wish.