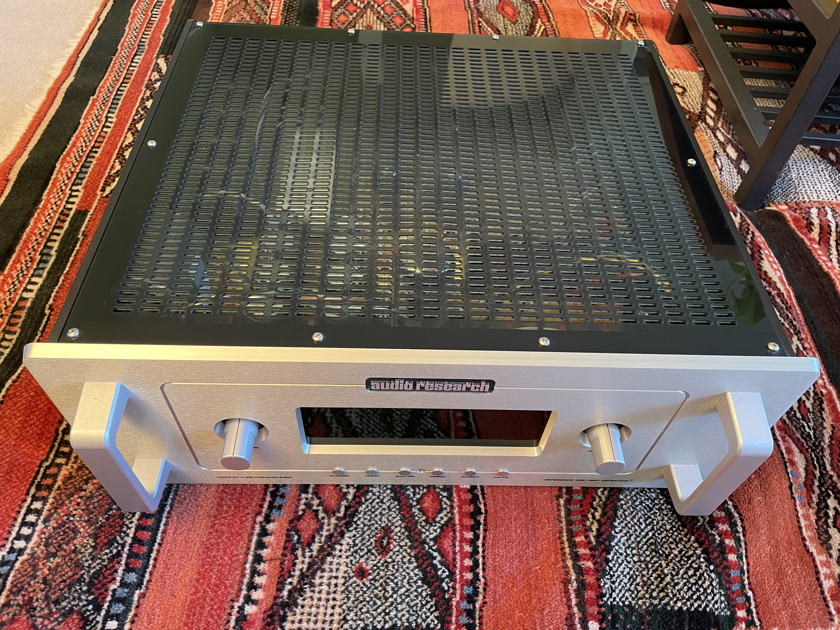 PLEASE NOTE Due to upcoming travel next week this listing will be ending on Monday January 1st since I will not able able to provide shipping for over a week. I don't want a buyer waiting for over...6200.00

PLEASE NOTE Due to upcoming travel next week this listing will be ending on Monday January 1st since I will not able able to provide shipping for over a week.  I don't want a buyer waiting for over a week for shipping... Thanks for your understanding,

ARC 5SE  Pre amp, Detailed without fatigue, extremely engaging listening, extra tweaks included!  If you are looking at this you probably know how well it is respected.
Front row seat listening!

Listed as 8/10 due to the plexiglass top having a bit of warp over the rectifier tube from damping weights...Remote shows use..  Price reflects condition.  Extra set of balanced and matched NEW tubes from The Tube Store included at my asking price as well as a Quantum Blue Fuse.

I love the overall sound and imaging of this pre amp, mixed feelings about letting it go..
Tube rolling has kept the original tubes only approx. 1950 hrs.  Powered on total time 6719 hrs

From the ARC website...
The Reference 5 SE is the latest model in a series of the finest and most successful line-stage preamplifiers ever made. From the Reference1 to the Reference Anniversary, each one has built upon the legacy of its predecessor as the most sought-after reference level line-stage preamplifier. The Reference 5 SE clearly redefines the state of the art at a price that is not inexpensive but represents extraordinary value. Like every Audio Research product, it is made entirely by hand in our facility in Minnesota.

The Reference Anniversary has been regarded as perhaps the finest preamplifier ever built, and the Reference 5 SE has the distinct advantage of benefitting directly from that lineage. Key component technologies derived from the Anniversary preamplifier have been incorporated into the Reference 5 SE providing even more presence, weight and definition than that of its predecessor, the Reference 5. The Reference 5 SE possesses great bandwidth and resolving power combined with a purity and naturalness that is uncanny – grain and electronic artifacts are simply absent. Bass impact, depth and control are startling, while music ebbs and flows with a dynamic life that is rarely experienced outside the concert hall. While differences in recordings are immediately apparent, the Reference 5 SE connects you to the intent of the musicians and the soul of the performance, drawing you in. Music emerges from a totally black background because the Reference 5 SE – defying its vacuum-tube architecture – is utterly quiet. Only by hearing it for yourself will you fully appreciate the sonic advancements unveiled by the Reference 5 SE.


The aesthetic continues with the traditional look of Audio Research, adding the refinements of a redesigned front panel with metal buttons. Both natural and black faceplates and features can be fitted to the unit, providing flexibility and customization to match the rest of a system. The large vacuum-flourescent display continues from previous models, providing clear feedback from the unit. The handheld remote controls all front panel functions plus other features such as balance, tube hour counter and display brightness.


The Reference 5 SE uses circuit board topology from its predecessor as well as from the Anniversary, with its transformers off the board and mounted on the sides of the chassis. The audio circuit is fully balanced, pure Class-A triode, with zero feedback. The tube complement includes four 6H30s in the analog stage, with a 6550 and a 6H30 in the power supply. Massive energy storage, double that of the Reference 5, provides tremendous dynamic capability. Total gain is 12dB via the balanced outputs and 6dB via the single-ended outputs. Six sets of balanced and single-ended inputs, a unity gain (processor) input, and three sets of outputs are installed for ease of connectivity and flexibility.

Audio Research redefines refinement yet again with the Reference 5 SE.
[From the ARC website]