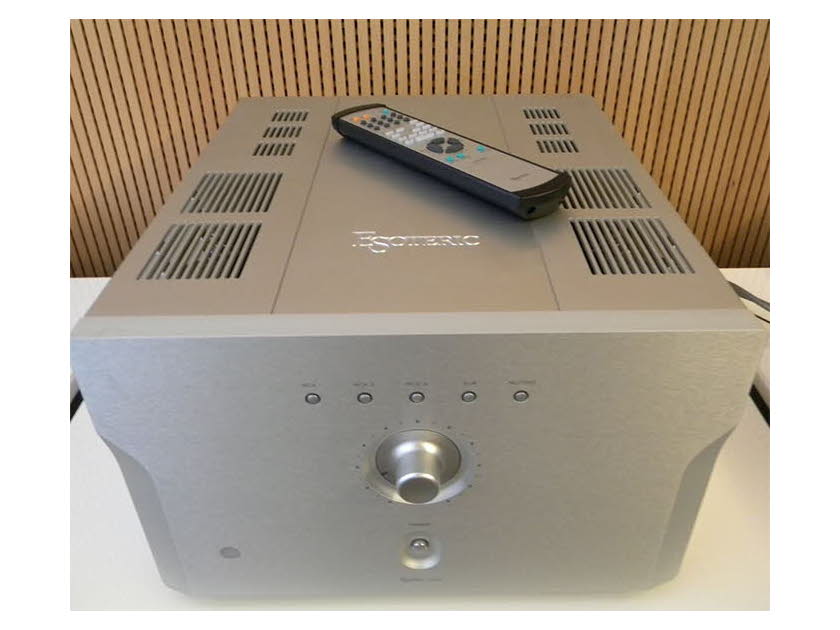 Phone (719)203-6619 Website www.audiolimits.com The A-100 offers amazingly dynamic and lavishly delicate sound. From its overall construction to its power supply, internal circuits, and individual...14000.00

The A-100 offers amazingly dynamic and lavishly delicate sound.
From its overall construction to its power supply, internal circuits, and individual parts and components.
Output power Minimum 45W+45W (1KHz, 4ohms/8ohms)
Frequency response 20Hz to 60kHz (at 1W, 8ohms, +1/-3dB)
S/N ratio more than 98dB (JEITA)
General Power supply AC 230V 50Hz will convert to 110V
Power consumption 200W
External dimensions (W×H×D) 382×252×486 mm
(15-1/16×9-7/8×19-1/16 ")
Weight 40kg (88lbs) Ostensibly, the A-100 is yet another push-pull amplifier generating a minimum of 45Wpc from one-pair-per-channel of KT-88 beam tetrodes in ultra-linear connection. It should be clear at the outset that this is a reference product—in reality an epic endeavor to make the venerated KT-88 sing like never before. It was conceived and executed without compromise. From a rigid H-frame chassis and through passive parts selection and circuit design, the ultimate arbiter was sound quality. A star attraction is a newly designed output transformer that uses silver-plated copper foil for the secondary winding. Very tight coupling is said to have been achieved between the primary and secondary. All stages, except the KT-88 output stage, are powered by fully regulated power supplies. With the exception of the power tubes, filament supplies are DC, which is said to reduce hum.

Whereas other designs seek to skimp on costly active stages, the A-100 goes the extra mile by introducing cathode followers ahead of and following the phase splitter. The input stage uses a 12AT7 dual triode for voltage amplification and as a cathode follower. A single 12AU7 (per channel) is configured as a classic paraphase phase splitter. Although not as popular these days as a split load or a long-tailed pair, the paraphase was chosen on the basis of its sonic merits in this application; the overall sound of the A-100 was simply more natural with this topology. The phase-splitter stage is followed by another 12AU7 configured as a cathode follower. Recall that the output impedance of a cathode follower is low and that it makes for an ideal driver stage. Interestingly enough, the last three stages are DC-coupled—that is, there are no capacitors in the signal path between the phase splitter, cathode follower, and the output stage.

The KT-88s used by Esoteric are manufactured in Slovakia, presumably at the JJ electronic factory. Tube quality is strictly controlled: Tubes are aged for an incredible 250 hours before being matched in pairs. Output stage bias is under the control of an advanced active-biasing circuit. This circuit automatically compensates for fluctuations in bias voltage by detecting cathode current and output level demand. The bias circuit works in tandem with a zero-DC-level circuit that balances the push-pull sections of the output stage. The end result of maintaining optimum bias voltage and balance is improved output stage linearity and reduced distortion, even under high-power drive conditions. Two bias settings (A or B) are selectable from a back-panel switch. The A setting offers slightly reduced bias current and may be preferred (according to Esoteric) with some types of music (e.g., classical) due to enhanced detail. The B setting is characterized as Reference Mode, though it is emphasized that preference for one setting or the other is totally subjective.

There is presently no official guidance on how often to re-tube the amplifier since the A-100 is brand new. My guess is several years under typical use, though Esoteric plans to establish a guideline at a later date. Note that in order to maintain warranty coverage tube replacement is only to be performed at an authorized dealer or at the factory. Do it at home and you void the warranty. The reason given for that is that the biasing process is complex and adjustment is required even after re-tubing with an Esoteric matched set of tubes. Esoteric understands that this process is inconvenient and incurs shipping costs to the dealer, but cannot simplify the process without sacrificing product quality. From Esoteric’s perspective this ensures that a customer will enjoy the A-100 with the original production and sound-quality levels even after?tube replacement.

Functionally, the A-100 may be configured as either an integrated amplifier for line-level inputs or as a basic stereo power amplifier via a switch on the back panel. When the amp is set for Direct input, a single RCA input bypasses the input selector switch and volume control. When switched for integrated amplifier operation, three unbalanced (RCA) inputs and one balanced (XLR) input may be selected, and these are routed through a high-quality 10k Ohm motorized volume control. An illuminated remote control is included. Speaking of parts-quality, nothing but the finest here: RCA input terminals are WBT-0201 and speaker binding posts are WBT-0710Cu nextgen. Even the AC power socket is rhodium-plated and treated cryogenically.

My first listen, as well as a significant fraction of subsequent auditions, was conducted using the Direct input and B bias setting. Initially, even with a modest front end of the PrimaLuna Eight CD player and First Watt B1 buffer preamp (driving the Esoteric MG-20 loudspeakers), it was a case of love at first listen. The A-100’s lyrical presentation evoked instant ecstasy. The PrimaLuna Eight’s tube character came through in spades, remarkably authentic in terms of instrumental colors. Mids were not only pure and sweet but the lower midrange was reproduced with authority. Recordings with a big tonal balance were reproduced with their tonal weight intact. The A-100 did not indulge in obvious tube euphonics. Midrange warmth was a function of the recording and not a chronic condition. The soundstage was huge, transparent, and nicely layered, with a cavernous depth perspective. The real “show-stoppers,” however, were image outlines—as three-dimensional in extent and as reach-out-and-touch-them palpable as I’ve ever experienced. A case in point is Oldarra: Le Chant Basque [Detour CD], a wonderfully atmospheric recording made under concert conditions of a male choir in a church acoustic via a single 3-D microphone (presumably a Calrec Soundfield mike) and no additional mixing. The resultant sense of space was absolutely breathtaking and speaks volumes for the synergy of the A-100 and MG-20 combo.

After the initial shock of discovery subsided, I began to take note of a couple sonic issues. The treble was a bit recessed as in muted cymbals and brass, making for too civilized a sound. As a consequence, the overall tonal balance was laid-back and dark sounding. It occurred to me about this time that I had hooked up the MG-20 to the A-100’s 8-ohm taps, which may not have been the optimum choice. Connected to the 4-ohm taps, the MG-20 sounded dramatically better balanced; livelier, more forward, with greatly improved treble air and detail. This experience highlights the importance of experimenting with the available impedance taps because they present different source impedances. A low source impedance is ideal in minimizing amplifier/speaker interactions and improves the woofer damping factor. But it is a difficult objective to achieve without large amounts of global negative feedback. In the case of the A-100, the source impedance at the 8-ohm taps is said to be 4 ohm, while that at the 4-ohm taps is 2 ohms—exactly what you would expect from a low-feedback design. Hence, the 4-ohm taps would be expected to provide better bass damping and less interaction with a speaker’s impedance curve. The 4-ohm taps continued to provide outstanding resolution of spatial nuances. And there was plenty of low-level detail. Transient speed for a tube amplifier is often a problem due to limited bandwidth, which results in an overly liquid and soft sound. Not so with the A-100. It propelled musical lines forward with excellent pace. The bass range, usually a liability for a tube amplifier, was well defined in the upper bass and almost as well defined in the midbass. The A-100 was able to generate a respectable level of bass punch and certainly sounded much more powerful that its nominal rating would imply.

I did take the time on a couple of occasions to compare the A and B bias settings. And in both cases I preferred the normal B setting, as the A setting appeared to shrink soundstage depth and slightly diffuse image outlines. Though I freely admit that these findings may be both system and music dependent. Thus, you should take the time to experiment in the context of both.

Next in store for the A-100 was the Final Sound 1000i electrostatic loudspeaker. This is a difficult load for any amplifier, but the A-100 was clearly up to the task. It did not lose its composure, apart from for a slight compression of the macrodynamic range when being driven from soft to loud. Microdynamics were realized with conviction. Bass lines were tightly defined. Effortless transient attack and controlled decay—attributes electrostatics are famous for—were very much in evidence. As I feared, however, the tonal balance was canted toward the midrange at the expense of the extreme treble. Had the speaker’s impedance magnitude been reasonably flat through the midrange and treble, the A-100’s source impedance would not have significantly altered the speaker’s frequency response. But when you’re driving a capacitive load with a decreasing impedance-magnitude that drops to about 1 ohm at 20kHz, there are consequences. Measurements of the 1000i’s frequency response when driven by the A-100 (4-ohm taps) showed about a 4dB dip above 10kHz.

The coupling of the A-100 with the Venture Audio Excellence III Signature loudspeakers resulted in a fairly neutral tonal balance with a full-bodied and emotionally expressive lower midrange. Harmonic textures were luxurious and free from electronic glaze. Instrumental timbres were both vivid and authentic in color saturation. Orchestral music was allowed to soar effortlessly from soft to loud. Again, the A-100 excelled in recreating a believable acoustic space. There was plenty to like at both frequency extremes. In particular, acoustic bass lines were tightly delineated and kick drum was quite gutsy for a tube amplifier. The A-100 was very revealing of the sonic character of front-end components. It was surprising to observe clear differences in imaging and harmonic textures when switching from tube to solid-state preamplification. In contrast, vintage amps tend to impose a thick euphonic signature over the soundstage making it harder to differentiate substitutions further up the signal chain. I spent some time with the Weiss Engineering Jason CD transport and Medea DAC, driving the Medea directly into the A-100 configured as an integrated amp. The squeaky clean and highly-detailed presentation of the Medea was not lost on the A-100. It responded with intense harmonic purity and clearly demonstrated that it is a high-resolution device.

Only a handful of amplifiers on this planet are as revealing as the Esoteric A-100 of a recording’s origin and acoustic signature. Those of you, who like me, crave tube magic in the form of vivid harmonic colors, palpable image outlines, and a spacious soundstage, may rest assured that the A-100 delivers the goodies. In fact, I don’t know of a more synergistic match for Esoteric’s exceptional MG-20 loudspeaker than the A-100. Yet it goes further than any other medium- or high-powered tube amplifier I’ve auditioned to-date. The A-100 amplifier breaks through the traditional barriers of tube amplification: low-distortion harmonic textures, transient speed, and resolution are integral to its reproduction of music. Now you can have your sonic cake and eat it too! I submit to you that the A-100 represents the state-of-the-art in medium-power tube amplification. It’s as good as it gets.